Following the recent opening of Shapeways’ Factory of the Future in New York, the company has launched a new challenge for the City’s makers, designers and engineers to create product prototypes that have commercial potential. The challenge was initiated by Mayor Bloomberg and the goal is to support design driven production, as well as promote innovation within New York’s industrial business, design and engineering communities.

The Challenge begins this month (mid November) and key makers, designers and engineers will be invited to enter their prototypes in the challenge. According to Shapeways, the challenge will be open for submissions until mid February 2013. Finalists will be selected by an expert panel of judges and the participants will be guided on the path to commercialisation during the studio phase.

Assistance will include studio space from sponsor NYDesigns, business support, and mentorship from industry experts such as Adafruit Industries, Honeybee Robotics and Shapeways personnel. The judges will award an additional cash prize to the most promising winner following the studio phase, which will run between April and August 2013. 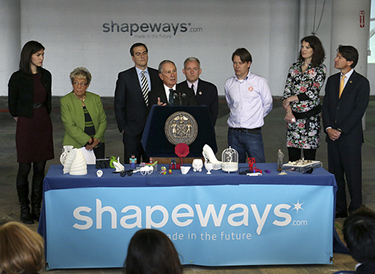