The fourth edition of the 3D Printing Industry Awards takes place this November, and as is tradition, we are now searching for a new 3D printed trophy design for the winners via our Trophy Design Competition.

Digital manufacturing provider Protolabs returns to sponsor the event for the third time, and the prize for the winning trophy will be generously provided by Craftbot. The community-led contest challenges entrants to design a trophy that celebrates the unique capabilities of 3D printing.

The winning trophy designs will be reproduced by Protolabs and awarded to the 3D Printing Industry Awards winners. The designer of the winning trophy will also receive a 3D printed model of their design, and a Craftbot Flow IDEX XL 3D printer worth $3,999.

The competition is being hosted by MyMiniFactory, a 3D design, and file-sharing community. Applicants interested in submitting their design for the Trophy Design Competition must do so via MyMiniFactory, no later than September 30th.

So far, many of the entries have introduced interesting aesthetic elements by playing with the idea of printing in translucent/clear materials.

The following entries have been uploaded for this years’ Trophy Design Competition so far:

The Voronoi Ruby Trophy designed by Madhav Parekh consists of a transparent linear sweep pattern and red Voronoi sliding in, locking together in a tight fit. According to Parekh, it would “look amazing” if it were to be fabricated by Protolabs.

Designed by James Novak, also known as Edditive, the design is based on the concept of yin-yang or opaque and transparent. MJF and SLA are used to create positive and negative lattice details, which all come together “in balance.”

Designed by Bole Romero, the trophy is inspired by black holes and the indie band Muse. The design features a lattice with ingrained channels. 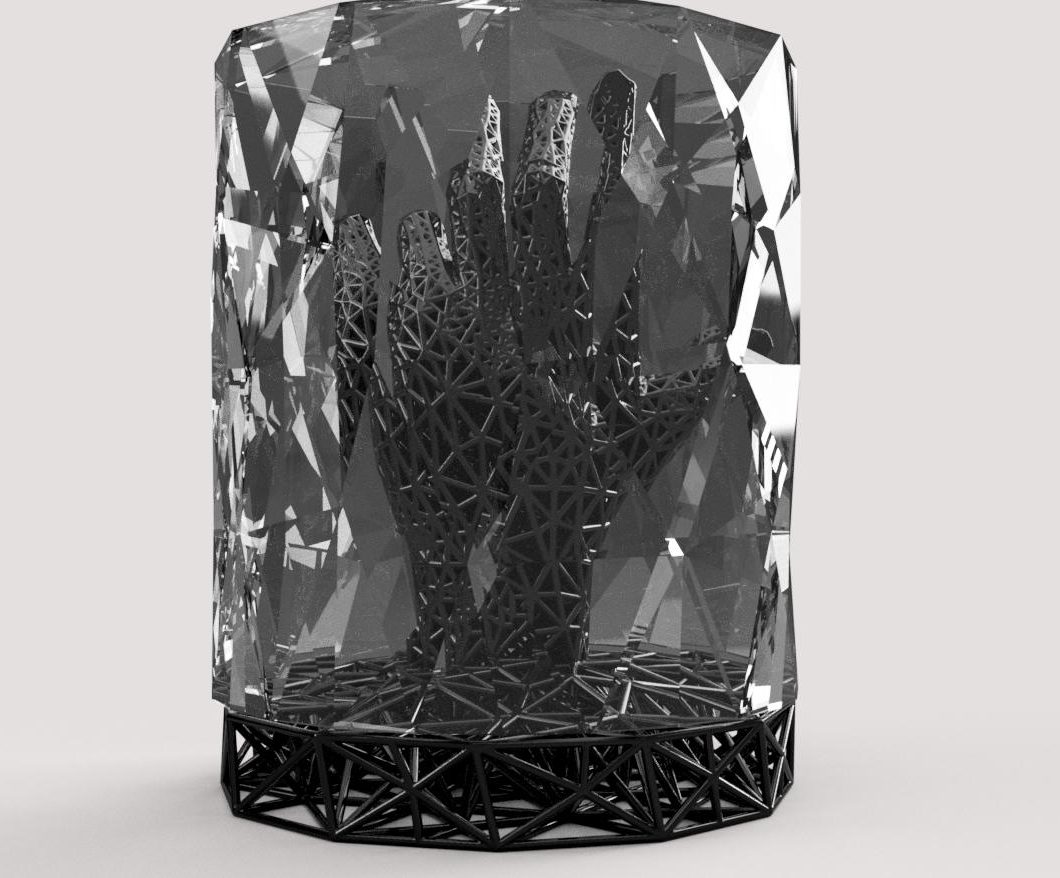 Designed by Vignesh Kumar M. Image via MyMiniFactory.Although its creator Vignesh Kumar M gave little insight into their inspiration, the trophy’s striking feature is the hand at its inner core.

Designed by Madhav Parekh, the trophy consists of a main body with intricate Voronoi patterns and an internal channel spelling ‘3D’.

Past attendees at the 3D Printing Industry Awards include Dr. Adrian Bowyer, RepRap founder, Fried Vancraen, founder and CEO of Materialise, guests from the Manufacturing Technology Association, Innovate UK, and the U.S. Embassy in London. Plus, even a royal family member, His Highness Azzan Kais Tarik Al-Said of Oman.

This year the event is set to be bigger than ever, and the winning design will be presented in front of the biggest names in the 3D printing industry.

The winning trophy design will have full access to Protolabs’ state of the art additive manufacturing services – this year, we’ve broadened the range of technologies available.

Under the circumstances imposed by the COVID-19 pandemic, this year’s awards ceremony will take place online, meaning that a wider audience will now be able to attend. Set to take place this November, the digital event will gather leaders and innovators throughout the 3D printing industry, including applications, materials, academic advances, and hardware. Thus, this is an exclusive experience to keep up to speed with what is happening in the additive manufacturing world.

The nominations process closes at the end of this month – so don’t delay.

Winning a 3D Printing Industry Award is a two-stage process, with nominations followed by voting. Anyone can make nominations across 20 categories. Those with the most nominations will be included in the published shortlists. Readers will then be invited to vote for the winners of this year’s prizes, which will be announced at the awards ceremony in November.

In the second stage, shortlists are drawn up based upon nominations received, and nominations for the 2020 3D Printing Awards are still open, so let us know who is leading the industry now.

The fourth edition of the 3D Printing Industry Awards Trophy Design Competition is now underway. Enter your design for the chance to win a CraftBot Flow 3D printer.