Over the weekend, Reddit user zeurydice shared some 3D printed game pieces for the board game Carcassonne in the popular /r/boardgames subreddit. Aside from a few snipes about the way that Shapeways prices individual prints the response was overwhelmingly positive.

Reddit is essentially a large user-generated link and content aggregator, and users are free to start up ‘subreddits’, or self-contained message boards for specific interests and subjects. User modification of board games is a popular topic on the board games subreddit, or /r/boardgames, so its not a surprise that this submission received so many positive responses.

If you’re not familiar with the board game Carcassonne, it’s a pretty simple game of city, road and farm building. Breaking with tradition, Carcassonne doesn’t have an actual board, you have to build it as you go, and you do so with tiles and game pieces called Meeples. Each payer will be assigned a specific colour of Meeple and use them to claim the objects being built, be it a city, a road or a farm. The game may be relatively simple to learn, but it has a very high replayability rate and a very loyal player base, so it is well suited to customisation. Over the years I’ve seen many kinds of user modifications to the game, from storage boxes to hand-made 3 dimensional tiles and even cookies made to look like game pieces. There have even been 3D printed Meeples before, but only a few and frankly none as nice looking or unique as these.

Zeurydice used Blender and OpenSCAD to 3D model the game pieces and then uploaded them to Shapeways to print and build. Demand was so high that he even started up a Shapeways shop so his fellow Redditers could get some new Meeples for themselves. 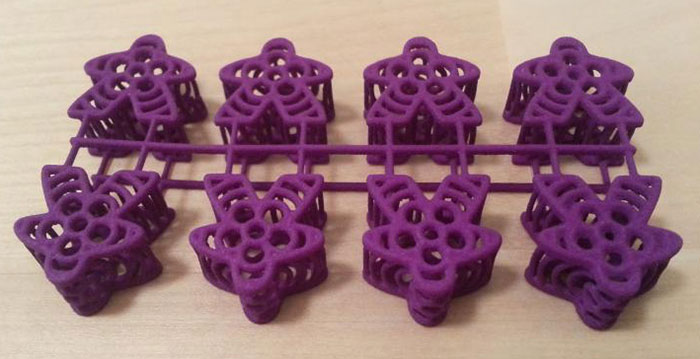 The designs in his shop range from Meeples with the classic shape and silhouette to a ‘puffy’ version that looks a little like a Meeple-shaped piece of popcorn. He even created a pair of Meeple earrings for his girlfriend and printed them in Bronze. The most interesting, and the one object that he couldn’t put in his store due to trademark questions, was a Meeple that looks like the Reddit mascot Snoo. Although you can always message him and ask for the STI file if you really want one.

You should check out the entire post on Reddit here, because there are actually some pretty great conversations about 3D printing and as with any Reddit post a lot of thread drift and entertaining but unnecessary side-conversations. And if you’re a Carcassonne player, you should also head on over to zeurydice’s Shapeways store and get yourself some new Meeples in whatever colour that you want.