Anyone who thought Chia Pets were nothing more than a novelty didn’t realize that they would set the foundation for what was to come in the 21st Century. Those ceramic pots shaped like heads and were seeded in just such a way as to grow the chia so that it would resemble hair or fur. The printGREEN 3D printer out of the University of Maribor in Slovenia takes that idea one step further and lays out grass seeding in any pattern you can imagine. 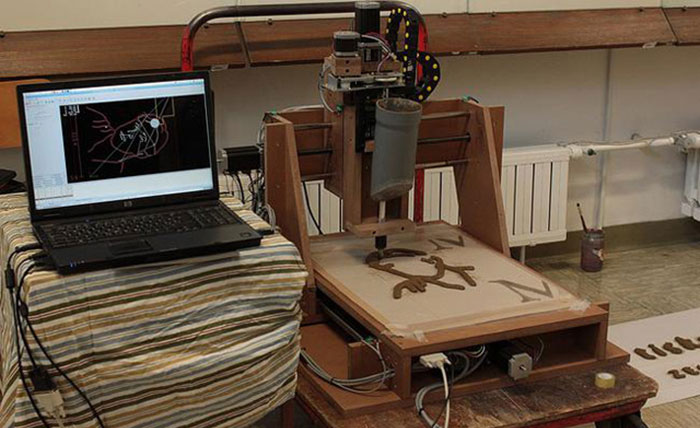 Designed by art education students Tina Zidanšek, Danica Rženičnik, Urška Skaza and Maja Petek, printGREEN, or “tiskajZELENO” in Slovenian, was built to join nature, technology and art together into a single project. The machine is a modified CNC machine that extrudes a paste made up of water, soil and seeds into any pre-programmed shape. As you can tell from the above picture, the machine itself, lacking a Z-axis, does not move in three dimensions.  What does classify printGREEN as a 3D printer, in my mind, is that it relies on an organic Z-axis. The subsequent layers are developed over time with the growth of the plantlife printed onto the substrate, eventually yielding depth.

Taken one step further, I can imagine the printGREEN machine tracing the design for the walls of a semi-organic home. Something like carbon-reinforced foliage could grow up out of the dirt to form walls and the printGREEN could top the structure off with a roof.  If you’re not content with calling the Slovenian project a 3D printer, I’m sure it wouldn’t be difficult to add a Z-axis with multiple extruders to additively manufacture a grass-infused three-dimensional object.  Either way, printGREEN offers a lot to get inspired about.  Watch the machine extrude its own name in the video below. A premonition of the robot’s future self-awareness, perhaps?

Update 1/3/2013: I’ve been informed by the project’s creators that printGREEN does, in fact, have a non-organic z-axis, which has allowed them to print some mud bowls infused with grass.  This makes the process even more exciting! See the mud bowl below!