The BI V2.0 on Kickstarter is a Deltabot Solution to Large-Format 3D Printing

From the harsh, alien terrain of Quebec comes a deltabot 3D printer that could have only been spawned from the frigid winter lands of Canada. The BI V2.0, now on Kickstarter, looks to be a high-precision machine with a huge build volume and some extra perks that set it apart from other deltabots launched on the crowd-funding site.

If you couldn’t tell from the oblique name, the BI V2.0 is the second generation BI machine from Jean Le Bouthillier and François Crête and their company Boots Industries. After the success of their first 3D printer kit, the duo went on to build a bigger and better machine.  The V2.0, which has exceeded its $30,000 funding goal quite quickly, will have a build volume of 300 mm in diameter and 300 mm in height (almost 12” D x 12”H).  It also features steel-reinforced, 3D printed corners and ¾” anodized aluminum extrusions, giving the deltabot a sturdy frame and reliable linear motion.  he extruder, a 0.4 mm JHead hot end, is supported by a triple pulley system using 50 lb test spectra line, which won’t stretch and become slack with continuous use.  The hot end has been modified, according to the Boots Industries team, so that printer filament can only move in one direction, out of the nozzle.  In other words, their modified design prevents the backflow of filament and, thus, significantly reduces clogging. 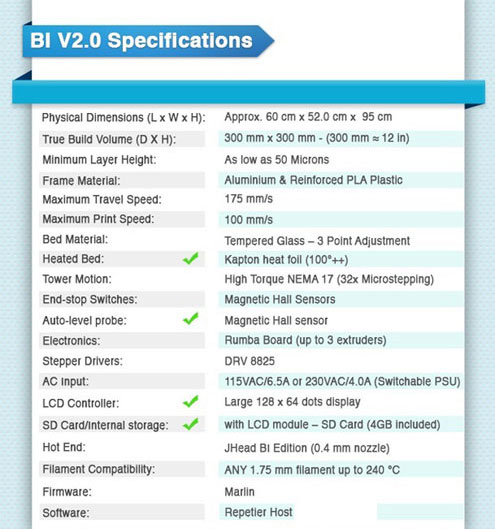 If an almost uncloggable extruder doesn’t sound nice to you, the auto-leveling probe might. The probe measures the height of a print at different points throughout a job, adjusting the nozzle to ensure consistent layering. In addition to the auto-levelling probe, which comes as standard on all BI V2.0 machines, the deltabot will also have sleeved electrical wiring, quick disconnect wires, fans attached to each of the three arms of the printer, and, interestingly, a ring of LED lights around the extruder to illuminate the printhead. With upgrades, it’s possible to attach multiple extruders and an LED screen, to allow for untethered printing. 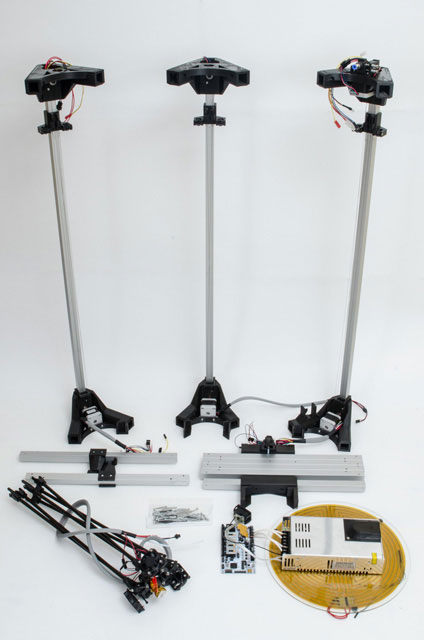 What’s also really cool about this machine is that it comes partially pre-assembled. The extrusions and corners are already fitted together and the wires are pre-soldered.  Basically, all you have to do is put the frame together and attach the electronics and you’re in business.  Altogether, the BI V2.0 has a price tag of $1,199 CAD or about $1,125 USD.

Watch the Kickstarter video below and try to determine if you want to make your next 3D printer a delta: