Back in October Shane reported on how Asda, one of the UK’s top four supermarket chains, was dipping its toes in the 3D printing market, by offering a 3D printing selfie service at its York store. This toe-dipping exercise has now been dubbed “a resounding success” apparently, ahead of Asda rolling the 3D printing service out to 50 more stores in the New Year. 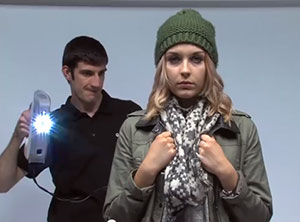 Asda, which is a subsidiary of the US retail giant Walmart, is still taking things (relatively) slowly with this roll-out. Asda customers at the 50 stores, across the UK, will be able to book scanning sessions to produce 3D digital models of themselves, which can then subsequently be 3D printed to produce figurines of themselves (or loved ones) that can be picked up in store a week later. Prices come in at £40 for an 8 inch figurine, but can be scaled up or down according to the requirements of the customer and within the restrictions of the 3D printing process — something to discuss on site at the appointment.

If the same level of uptake is maintained across the 50-store roll-out, the plan is to make the service available nationwide. Market research by Asda has shown that the service, to date, has proven popular with soldiers and their children. Specifically, according to Phil Stout, head of personalization at Asda, those: “who are not at home for Christmas because they’re doing tours of Afghanistan [and] have given them to loved ones as a gift, which is quite touching. It provided an extension of the Asda personality, and was a real point of difference in our stores. It successfully added a lot of theatre to our stores.”

Looking at ways to extend the service, Asda is also working on developing licensing deals that will allow customers to personalise themselves as branded 3D printed characters — think Superman, Batman, Captain America or, say, Disney Princesses.

Asda has also let it be known that they are considering selling 3D printers off-the-shelf.