’3D selfies’ are now a bit of an everyday commonplace. But it’s not every day that 3D scanning and 3D printing are used to create a bust of the world’s most famous political leader, the President of the United States of America, Mr. Barack Obama. As one of the most recognisable people in the world, and one of the most forward thinking leaders in the world, Barack Obama is an emblem. Inspired by a beautiful likeness of the couragous Abraham Lincoln, 3D tech has been used to create an emblematic 3D printed likeness of a US President for the first time. The portraits will be on view in the commons gallery of the Smithsonian Castle Museum until the end of this month.

It was two years ago now that the Smithsonian Institution’s Adam Metallo and Vincent Rossi outlined a vision named ‘Next Generation 3D Portraiture: A Digital Life Mask Of President Obama.’ Later, the White House Office of Science and Technology Policy (OSTP) heard of the concept and went on to invite the Smithsonian team to produce an actual likeness of the President. In tandem with the University of Southern California (USC) Institute For Creative Technologies, who brought along their Mobile Mobile Light Stage, the Smithsonian Institute spent time taking the President’s image. 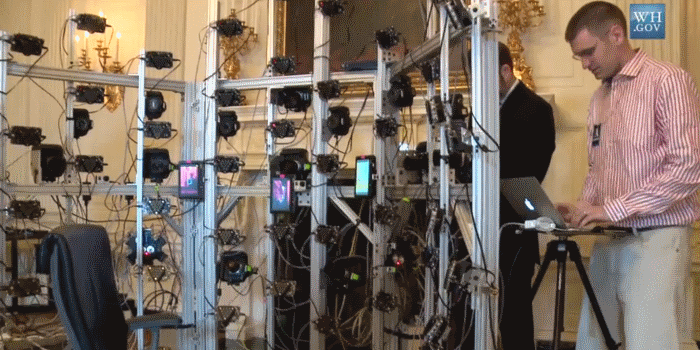 First the USC assembled their Mobile Light Stage, which encompassess some fifty light sources, eight high quality digital single lens reflect cameras — with an augmentation of addition sources to the system to include a top-down and reverse panoramic view. The digital photographic scanning system captured some eighty photographs in just one second, spread amoung ten different lighting arrangements within that brief time. 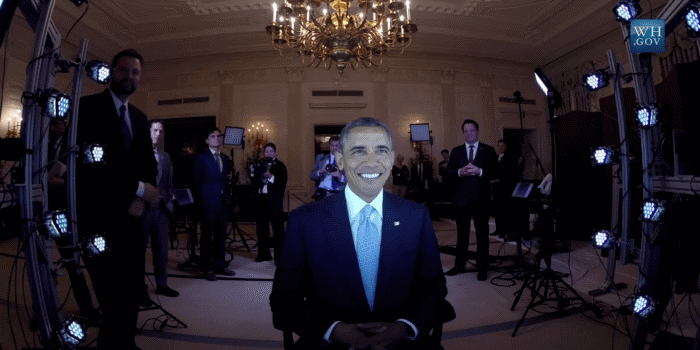 From start to finish the whole process took no more than seven minutes of Mr. Obama’s time. Between the Mobile Light Stage and hand-held three dimensional scanners, a vast amount of physical data was read, then converted into a deep resolution digital model — indeed the bust is the highest resolution digital model of a head of state ever produced at some 15,000,000 triangles.

The Smithsonian team said: “Since our stated goal was to produce a full bust of President Obama, we augmented the Light Stage technology with an additional process to capture the top and the back of the head, as well as part of the torso. For the second stage of the portrait, we asked the President to sit still while Adam and Vince circled him with hand-held scanners. These scanners capture video of a pattern of light which deforms when it is projected on a subject. Based on the deformation, algorithms reconstruct this data into color 3D geometry. As Adam and Vince proceeded with the scan, those of us in the room could see the image emerging on the laptops tethered to the scanners. Last but not least, a round of hand-held photography ensured that detail that is difficult to resolve for the hand-held scanners would not be lost.”

The final piece however was not the awesome digital render of Mr. Obama, but the Selective Laser Sintered 3D print that the digital master file was used to produce. After the Smithsonian team had taken the scans and photographs they moved on to reconcile and analyse the data. It was an all-night affair for the team as they checked through each of the myriad detailed images one-by-one for optimal rendering and missing data areas. The team share on the Smithsonian blog that they experienced more than a little sense of relief and satisfaction when their preliminary post-processing produced a positive outcome for this ground-breaking Presidential portrait. The required data set was there. It was time to move on to the next stage!

It was just the next day when the team began transferring the data to world leading 3D design software company Autodesk, who amalgamated the Mobile Light Stage, 3D scanned and photographic data in post-processing. The Autodesk team put together a 3D model by registering the various data source geometries into a single space and normalising the unified colour information to prevent seams. The last stage was the addition of the output models base plinth to create a bust profile. Just two days later and the final 1:1 scale bust file had been transferred to 3D Systems who used nylon powder based Selective Laser Sintering (SLS) to 3D print the large bust, which stands at no less than nineteen inches tall. Given the size and resolution of the bust, the 3D printing took fourty-two hours. The result is simply beautiful. 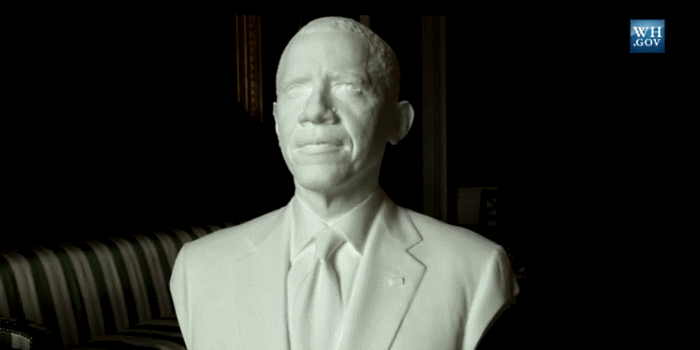 From there the American President was able to view his likeness first-hand. Mr. Obama was decidedly impressed with his 3D printed presidential bust. The final result was also displayed at the first White House MakerFaire this summer. 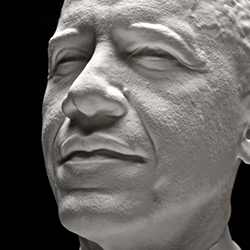 Now, the Smithsonian Museum has opened an exhibit of the advanced manufactured ultra-contemporary presidential bust, in digital form as part of their Smithsonian X 3D online exhibition and physical form at their commons gallery at the Smithsonian Castle Museum from December 2nd to 31st. You can catch the White House video release of this interesting 3D printed project below.