With an aluminium frame, NEMA17 stepper motors, an Arduino board, a build volume of 7” x 7” x 7”, dual bowden extruders, and a print resolution of up to .1mm, and custom Piece-It! software, the PieceMaker seemed like a pretty good desktop 3D printer.  But, when a touchscreen and a nice interface were wrapped around it, suddenly, the PieceMaker started to distinguish itself from the pack of RepRap machines launched on Kickstarter.  The PieceMaker, developed by the Pittsburgh startup with the same name, became a complete 3D printing kiosk. 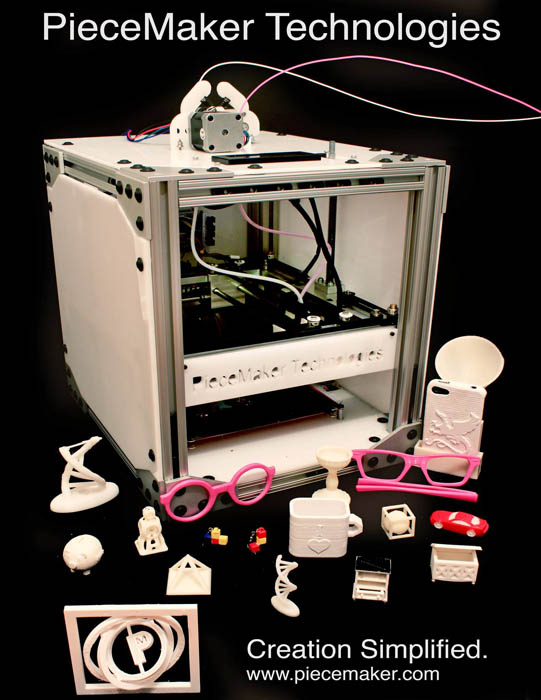 By the time PieceMaker had pitched themselves to AlphaLab Gear, a Pittsburgh business accelerator, the company had already come up with its Factory-In-A-Store experience. Their idea was to deliver to retailers an all-in-one 3D printing product package where customers could select and customize designs through their Piece-It! software and have an object printed in a matter of twenty minutes or so.  With funds and expertise from AlphaLab Gear – which provides either $25K for 5% equity or $50K for 9% equity, mentoring from business experts, a workspace, membership at a local hackerspace called TechShop, and more – the crew was able to develop their PieceMaker prototype kiosk.

PieceMaker Technologies unveiled their prototype at the Toy Fair in New York last week, where they elaborated on their business plan. The idea would be that their Factory-In-A-Store kiosks might be installed in various locations, such as toy stores, where customers could go to print off pre-tested 3D models, thus saving them from the headaches of failed prints and the like.  Retailers would be trained in the use of their machines, but the kiosks would be owned by PieceMaker Technologies, who would come in to repair and maintain their machines regularly.  Kathy Ceceri, at Make, compares it to “something like a soda distributor placing its vending machines”.

The Factory-In-A-Store is a great one for businesses that want to take advantage of 3D printing and the excitement (sometimes hype) around it, without getting into the nitty gritty of 3D printing technology. PieceMaker Technologies also points out that, by incorporating a 3D printer on site, places like toy stores wouldn’t have to worry about stocking particular items when their kiosks can produce goods on demand. We’ve already seen interest in such a business model from companies like McDonalds and 3D Systems has anticipated the demand for a 3D printing photo booth by malls and shops. If PieceMaker can satisfy the needs of customers better than most bowling alley vending machines, they may have a pretty solid business ahead of them.