Recently, Photizo Group undertook the first research study to focus exclusively on the world of personal 3D printing. Known to some as desktop 3D printing or consumer 3D printing, the personal 3D printing market consists of 3D printers costing less than $5,000 – or reasonably within reach of a single user interested in using additive fabrication technologies for their own applications.

There are several reasons why the study focuses specifically on personal 3D printing. Unlike what most people generally refer to as “3D printing” today, personal 3D printers have only been available for about seven years, and sales of these devices have seen explosive growth. Personal 3D printing is a vibrant, young and chaotic market segment with a lot of potential for disruption – and yet there are just as many people that do not believe personal 3D printing will have any significant effect on life in the future as are convinced of its future transformative potential.

To start, rapid growth is very likely to continue – there were nearly as many respondents looking to buy a 3D printer in the next twelve months as already owned one. But data from the study suggests some interesting differences in expectations between those respondents that currently own a personal 3D printer and those that are looking at buying one in the next year.

Current users, as suggested by the study, are very invested in 3D printing as a whole. Data in the chart below (featured in Photizo Group’s upcoming market report based on the results of the study) shows that the average number of personal 3D printers per user is 1.7. 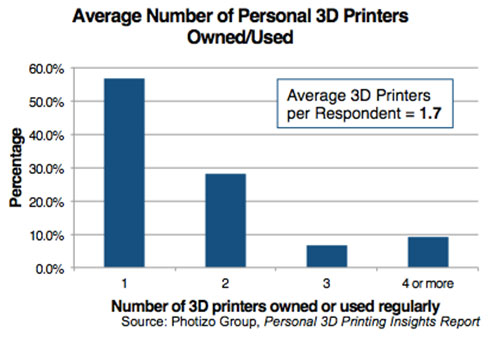 Users of personal 3D printers utilize them for a variety of applications, and since some printers lend themselves better to certain tasks, a lot of current users of 3D printing have more than one printer, likely for experimentation with different applications.

Similarly, users are also investing a lot of their time in using their 3D printers. An astonishing 83 percent of users reported that they use their printers several times per week or more, according to study data shown below. 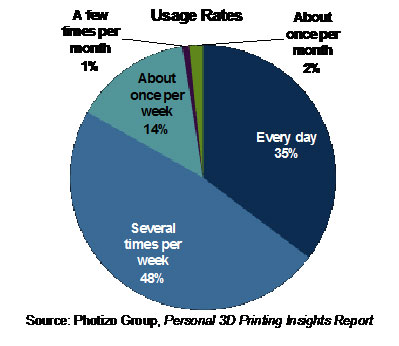 Data related to current users paints a picture of the traditional 3D hobbyist –someone who enjoys building 3D printers from parts kits (nearly half of users said they owned a printer they’d put together themselves) and invests time in fabricating objects for a variety of reasons as a hobby in itself. As a result, a lot of current users support open-source printers and the do-it-yourself mindset.

Media and magazines feature printers from 3D Systems, MakerBot and Kickstarter startups, but the reality is that a whole lot of users today still use “generic” RepRap printers or custom versions they have built themselves.

But when we look at data associated with those potentially coming into the market in the next twelve months, we see a different picture.

“Evaluators” as they are referred to in the study, are not nearly as interested in the currently popular self-built kits and open-source printers. Instead this group appears to align more closely to the emerging image of 3D printers as a bona fide consumer tech product – polished, functional and backed by a manufacturer they can turn to in the event of problems.

Perhaps the least surprising conclusion from the study: when it comes to hardware, these future market participants want more for less. When compared with current users, evaluators were more sensitive to price and manufacturer support in a purchase decision and reported that they were willing to spend significantly less on a future 3D printer purchase than those that already owned one.

But the reality for personal 3D printing is that the market is growing quickly, and the buyers and users of tomorrow are going to be operating under a whole new set of principles when it comes to personal 3D printing. Manufacturers need to be prepared to move fast – the floodgates have been opened, with around 86 percent of current users having purchased their first personal 3D printer since 2011 (shown below).

Of course, it’s not just about the hardware, or even current versus future users. The study found differences in how people are embracing personal 3D printing from a regional perspective, with Europeans and North Americans showing preferences for different types of printers, as well as having different levels of satisfaction with their printers. Analysis of software usage, 3D design proficiency and other infrastructure-based areas reveals that the personal 3D printing market is evolving across the board and not just in a single area.

The rate of change in the personal 3D printing market has been increasingly rapid over the past twelve months. Being cognizant of the expectations of current users and future users can prove to be a tricky task for hardware and solution providers in the space, especially when data suggests significant gaps in these metrics between the two groups. Despite the amount of competition, the field of play is still wide open for a company to monopolize the market. While some brands are certainly more established than others, there is still lots of fragmentation between those that want a build-it-yourself open source kit, a lower cost but professionally assembled printer, or a pricier “out-of-the-box” option with extensive manufacturer support.

Plenty of questions remain. But perhaps the most important one is, who is ready to serve tomorrow’s 3D printing market?