3D Printing in education is going to be one of the key catalysts to renewing manufacturing in The West. It is literally that important. Something that even politicians are beginning to realise. With this in mind, upon hearing that Dana Foster, Marketer for rp+m and 3D printing evangelist had recent experiences with 3D printing in the classroom, an interview seemed like an opportunity for an educational experience in itself.

3DPI: Hi Dana. As a 3D Printing Marketer you also have experience with children and 3D printing in the classroom. What age group were you talking to?

As a volunteer of Junior Achievement, I was selected to teach a 3rd grade classroom once a week for five consecutive weeks. I had the opportunity to not only teach 3rd grade students about business concepts, but I also introduced my company to them so they could learn about manufacturing and 3D printing.  I have also had several opportunities to attend high school and middle school classes with one of rp+m’s engineers to help introduce 3D printing and how the information they are learning in the classroom can be applied. 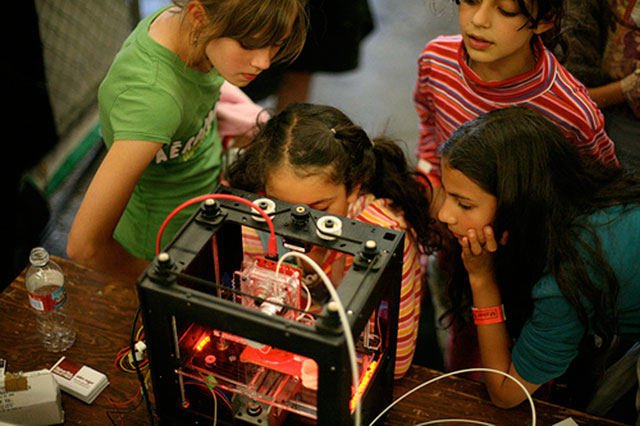 3DPI: Children in industrialised countries gain lucidity with technology very quickly in this digitally saturated days: was there a thirst for the technology?

Students were absolutely engaged in our discussions.  The 3rd graders wanted to know if different objects in the classroom were made using our technology (injection moulding and 3D printing).  As for the high school and middle school students, they wanted to use their design software more, so they could print their own parts.  According to the teachers, students were coming into school early, staying late and asking to come into the classroom during their study halls.  The teachers said this never happens!

3DPI: How did you communicate the way additive processes work?

For the 3rd graders, I described the process as you can create your own 3D model on a computer, such as an iPhone cover (Yes- 3rd graders know everything about iPhones, iPads, etc), send the file to the magnificent 3D printers and the 3D Printer will read the file and start printing your part.  There were a lot of questions if it’s similar to a computer printer and I would answer “Yes, very similar, however instead of 2D, the part comes out as an iPhone cover, so you can touch and feel it.

3DPI: Was there an onus upon particular types of 3D printing such as FDM or SLS?

I would not say there was an onus, however, when we brought in parts to show or the actual 3D printers themselves (middle school and high school classes), they were FDM and Objet.  At the time, those were the two 3D printing processes we had in-house. Although, now we have also expanded into metal machines — but these are not so easily transportable.

3DPI: Did you have props such as 3D printed items, or a 3D printer itself?

Yes.  For the 3rd graders, I brought in various parts they would recognize, such as a toilet, that we 3D printed. For the middle school and high school classes, we (Patrick Gannon and myself) brought in a Stratasys uPrint 3D printer and would leave it in the classrooms for a week or two. Specifically for the high school class, we had an iPod case design contest between all of the students and the winners were able to print their design on the uPrint.

3DPI: What sort of questions were the students asking?

As stated above, the 3rd graders started asking questions if we made certain parts, such as trashcans, tables, chairs, and more items located in the classroom.  My favorite question was, “Do you make the plastic bags that my mom puts my peanut butter and jelly sandwich in for lunch?”  I tried to hide my laughter, however, thought it was a great question!  You could see the engagement in the students and they were only 8 or 9 years old!  When I was growing up, we never talked about how things were made, such as trashcans, tables, chairs, etc.  In my opinion, these kids will look at manufacturing as an attractive career choice if we include manufacturing education and software into the curriculums.

3DPI: What recommendations would you make to teachers and others in explaining 3D printing to kids?

My recommendation I would make to teachers and others in explaining 3D printing to kids is to first fully understand why 3D printing is so amazing.  Once this is complete, you should explain it in a way the kids will be able to understand.  Relate it to their lives.  Show examples of parts they will understand that can be made on 3D printers.  Videos help tremendously too!  If you do not have access to a 3D printer, do not hesitate to contact me or others around you to figure out a way to see it live in action.  My final recommendation is when explaining the process show your passion while doing it.  Kids pick up on those kinds of things, so if they see you are passionate and excited about 3D printing and manufacturing they will be that bit more interested in the process!