In the race to manufacture the highest quality flexible filaments for 3D printing, Pennsylvania-based company Fenner Drives has arguably placed itself at the front of the pack with the production of their NinjaFlex filament, one of the most widely-used flexible 3D printing materials on the market thus far. This thermoplastic elastomer filament has made numerous 3D printing projects possible, from 3D printing flexible circuit board patterns to manufacturing ‘smart’ band-aids. And, now, the success of Fenner Drives’ widely used flexible filament has led the manufacturing company to start an entirely new division dedicated to the NinjaFlex material line, which they have named NinjaTek.

The subsidiary NinjaTek division will oversee the material production of NinjaFlex filaments and will also provide services to 3D printing material markets in over 25 different countries. The expansion will be managed by NinjaTek Vice President Wendy Booker, one of the many team members either promoted or brought in by Fenner Drives to successfully launch the new enterprise. It seems that the acclaim that has fallen on NinjaFlex filament has made it apparent to Fenner Drives that developing this product needs to be a priority, and, thus, have likely created NinjaTek to help focus all the necessary attention on the production and distribution of their flexible filament. 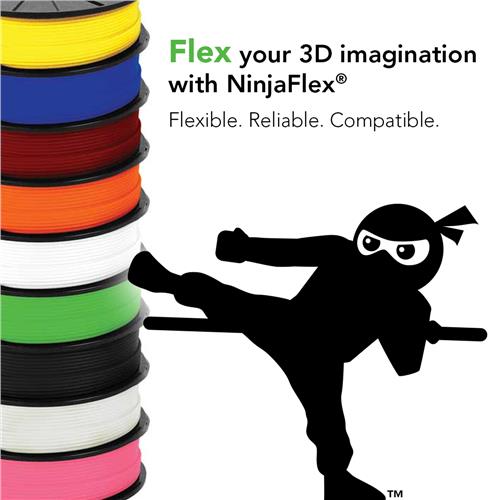 “By joining the industrial materials expertise of Fenner Drives with the Additive Manufacturing success of NinjaFlex filament, NinjaTek is positioned well to continue our success in the 3D materials world,” – NinjaTek’s Vice President and General Manager Wendy Booker.

Aside from Booker, who herself has over 16 years of experience in various product management positions, the NinjaTek team is composed of a well-balanced group of engineers, business developers, and marketing professionals. Covering all of the business bases with well-rounded individuals, which includes the likes of Jake McDonough from 3D Systems and Fenner Drives’ own sales professional Andrew Besancon, it seems likely that NinjaTek will be even better prepared to offer the highest quality of flexible 3D printing material to their customers. Hopefully this expansion into NinjaTek will lead to even further capabilities for one of the market’s most flexible filaments. Stealthily rising to the forefront of the 3D printing material market like a ninja in the night, NinjaFlex 3D filament should now have much more flexibility (pun intended) when it comes to the production or marketing of the material.