Yesterday I touched on the fashion industry as a high profile, high value sector that was increasingly showcasing novel applications of 3D printing. Well, perhaps one of the few sectors that can trump fashion is sport, specifically football? Bring the two together and people are always going to take it seriously — widespread global interest and billions of dollars of revenue always get the attention of big industry players — so it should not come as too much of a surprise to learn that Nike is the company ahead of the curve with the launch of the Vapor Laser Talon football boot, which ‘incorporates a revolutionary 3D printed plate that will help football athletes perform at their best.’

Now Nike (and, incidentally, Reebok, Converse, Clarks and Adidas) have used 3D printing technologies in their product development processes for years. This was the case for the Vapor Laser Talon too – 3D printing enabled Nike “to prototype a fully functional plate and traction system within a fraction of the traditional timeframe and at a fraction of the weight. The SLS process allows for the engineering and creation of shapes not possible with traditional manufacturing processes, as well as the ability to make design updates within hours instead of months to truly accelerate the innovation process.”

So far this is nothing new – but there is something significantly new about this story and that is that 3D printing is now being used as a final manufacturing technique by Nike, who invests millions in its R&D and works with some of the worlds top athletes to achieve optimal performance from its products.

According to Nike: “The quest for acceleration and speed has long been the north star for athletes across sport, and in order to excel in the game of football [Ed: at least in the US], the mastery of these skills is seen in the 40-yard dash. In a version built to master the 40, the Nike Vapor Laser Talon [boot] weighs a mere 5.6 oz. and is specifically designed for optimal traction on football turf and helping athletes maintain their “drive stance” longer,” — all enabled by the SLS 3D printing process. This goes some way to highlight the positive developments with materials for 3D printing, which for years were the weak point in the technology spectrum. There are no specs on the material used for this app, but it has to have flexural strength to withstand the very obvious stresses it will be subjected to. 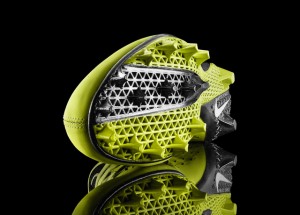 To develop this specific product Nike designers worked with elite trainers within Nike SPARQ as well as long time partner and gold medal sprinter Michael Johnson to understand how he and his team at Michael Johnson Performance train football athletes for the 40.

According to MJP Performance Director, Lance Walker, an athlete’s “Zero Step” is a pivotal point that can make or break an athlete’s 40 time. In the moments before that first step hits the turf, his propulsion and acceleration speed are determined. At that point, it’s all about geometry.

“Nike’s new 3D printed plate is contoured to allow football athletes to maintain their drive position longer and more efficiently, helping them accelerate faster through the critical first 10 yards of the 40,” said Johnson. “Translated to the game of football, mastering the Zero Step can mean the difference between a defensive lineman sacking the quarterback or getting blocked.”

So, I think we can take it as read that the new cleats (boots) will only be worn by the sport’s top athletes, not the common garden variety that you and I could go and buy from Sports Direct or JJB Sports. This development is not about volume manufacturing, it’s about increased performance for the super-few. However – for companies like Nike the investment payoff comes from the branding and being associated with the right teams!