Makerbot Partners With Nokia to Demonstrate the Possibilities of 3D Printing

When Nokia released 3D printing files for its Lumia 820 phone last month, it started a snowball effect that saw 3D printing services jumping all over the files with various outcomes. In yet another development on this front the mobile telecommunications OEM has teamed up directly with 3D Printer OEM Makerbot to create free downloadable 3D printing files to allow those interested in 3D printing to custom make their own phone case for the latest Nokia Lumia smartphones. Notice that’s a plural — the files for the newly announced Nokia Lumia 520 are now also available. And apparently, for anyone with their own Replicator 2 Desktop 3D Printer, the phone case(s) can be printed ‘in about an hour.’ 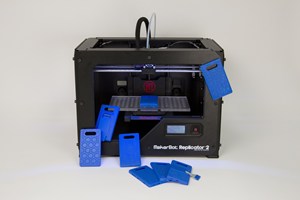 Nokia and MakerBot have just launched the Nokia 3D printing community project today. The 3D printing Development Kit (3DK) provides a 3D template and case specs for printing shell covers for the Lumia 820 and the 520. Using the 3DK anyone with a Rep 2 can print their own shell. The aim behind this initiative is, according to Nokia and Makerbot, to demonstrate the exciting possibilities for 3D printing and the project will be highlighted at this year’s Mobile World Congress in Barcelona, this week (starts today).

“Nokia provided the Lumia 820 specs, and Makerbot optimized them for printing the case on a MakerBot Replicator 2 Desktop 3D Printer. It’s a really cool shell that fits great,” noted Bre Pettis, CEO of MakerBot. “You can print in Nokia PLA blue, translucent white, or in any of the other numerous PLA colors. The design has a cool imprint and an oversized Nokia logo on the back.” The Nokia Lumia 3D printing files are available on Thingiverse and will also be optimized for customization through the MakerBot Customizer app.

Nokia is the first major phone company to release 3D templates for its hardware that can be printed on a 3D printer. It not only allows Nokia Lumia owners to personalize their phones, but brings Nokia into a whole new spectrum of innovation in the mobile phone category.

“Nokia’s design DNA is all about self-expression so getting involved in this community project is a natural extension of that philosophy,” said John Kneeland, a Nokia Community & Developer Marketing Manager. “3D printing is in an exciting development phase and we’re keen to help people explore this new technology.”