Growing at a CAGR of roughly 25%, the 3D printing market will be worth $17.2 billion by 2020, according to a new study published by leading market consultancy company AT Kearney, and reported by Consultancy.uk. The study, titled “3D Printing: A Manufacturing Revolution”, confirms 3D printing adoption is booming, and will continue to do so, at an industrial level.

To those who have been following the 3D printing industry closely, this many not come as news. Companies like Wohlers Associates and Gartner have long been estimating similar growth rates for the years to come. The real news is that more and more large consultancy firms are getting involved and interested in this market, which they predominantly see as vital for their customers in many fields. 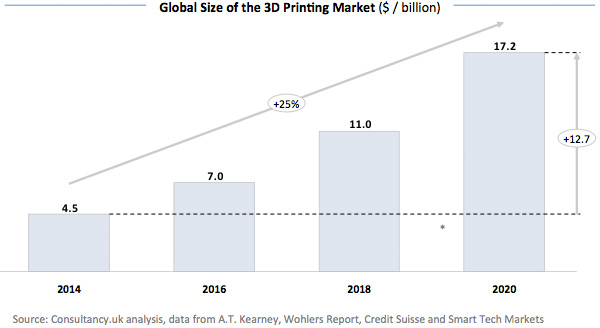 In particular, says the study by AT Kearney, those operating in the jewelry and energy sectors are relying on the technology. The analysis takes under consideration the market for hardware, supplies and services for the upcoming year. It starts from the current $4.5 billion figure, recently confirmed by the Wohlers Report 2015 as well, and outlines Aerospace (including Defense) accounting for 18%, Industrial (including Construction) at a similar 18% position, followed by Healthcare at around 16%. The Automotive and Jewellery sectors both represent a 12% market share, with the Energy sector at 5%. Other smaller sectors make up the remaining 20%.

AT Kearney sees Jewellery growing at 30% – 35% over the next 15 years, followed by Energy growing at 25% – 30% CAGR. The slowest growing sectors are Aerospace, Automotive and Industrial, where 3D printing adoption will grow by 20% – 25%. This, however, is still a very significant rate for these more consolidated segments of additive manufacturing. 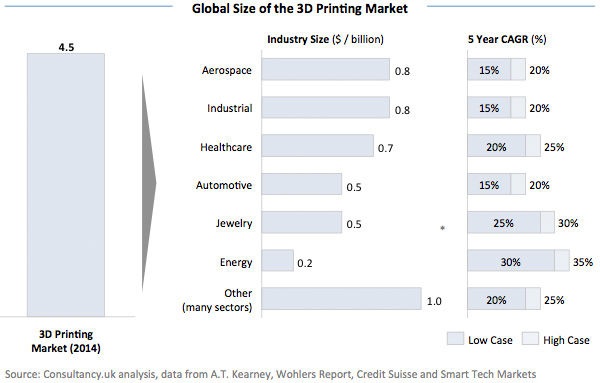 For the consultancy firm, it is no longer a matter of “if” 3D printing will become an integral part of the productive chain, but “when”. The fact that more and more large, traditional firms are opening up to additive manufacturing is likely to produce a cascade effect where the continued growth of the industry becomes a self fulfilling prophecy. One that is more than welcome, especially at a time when traditional market dynamics are proving more and more inefficient and unsustainable.