Never miss another Pokemon with this sniper sight

A 3D printed case can turn your iPhone into a Pokemon sniper rifle that simply does not miss.

Unless you’ve been living in a cave, you already know about Pokemon Go. This is a craze that has swept the world and children of all ages spend their free time stalking mythical creatures. Actually catching the Pokemon, though, has given people problems.

Throwing a Pokeball is a skill

There is a technique to throwing out the Pokeball and if you’ve found a rare Pokemon then you just don’t want that to be the time that you slice your shot off to the side like a bad golfer. So bright spark John Cleaver has come up with the Pokeball Aimer, which makes it almost impossible to get your shot wrong.

It slips over the iPhone and all you have to do is line up the Pokemon and let fly. It keeps your finger straight with a clearly defined track and as long as the Pokemon is in your sights, it’s harder to miss it than it is to catch them all. 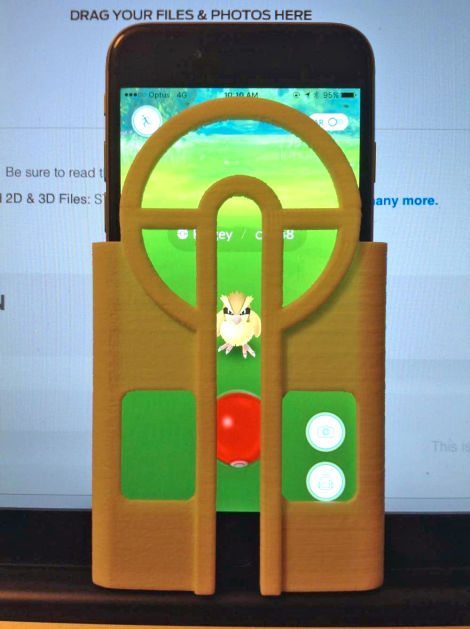 Other phones should be on the way

It’s just for the iPhone 6 right now, but Cleaver has promised to adapt the design for other phones if the demand is there. Seeing how popular Pokemon Go has become, we think it will be.

It broke the App store record for downloads in its first week and the records just keep on tumbling. The relatively simple use of augmented reality is a dazzling insight into what’s coming and the games will get even more advanced when Google Tango and other systems like it are fully integrated into the next generation of phones.

The reaction to Pokemon Go will alert everyone to the potential of these games and even the developers that weren’t interested in augmented reality will be now. Engagement is also simply massive and players are spending more time on Pokemon Go than on Facebook and other forms of social media that are now the benchmarks for time spent online.

That has helped the makers net $35 million in revenue so far and they have barely scratched the surface of the game’s potential. Big name advertisers are getting interested and even small businesses like pizza parlours are setting lures to bring in the Pokemon and the chasers to boost their turnover.

We can only imagine what is coming next, but we know it’s going to be spectacular.

Get the sniper rifle design online

Cleaver put the design online, on MyMiniFactory, so you can download and print your own Pokemon sniper rifle and see your strike rate go through the roof. Some users have noted that it will stop you throwing a curveball, but then this is really for beginners that need a helping hand and experienced Pokemon handlers will eventually master the art of throwing out the Pokeball on their own.

Is it cheating? Some people think so, but then if you’re tired of your Pokeballs skewing off to the side then this might be the competitive advantage you’ve been looking for.