If a MakerBot Replicator 3D printer can be used in pharmacological research labs for advances studies on how to administer cancer fighting drugs, then it should be no surprise that the Object 500 Connex3 multi-material and multicolor PolyJet 3D printer from Stratasys can be used for futuristic biomanfacturing projects, such as Neri Oxman’s newest Mushtari wearable, saturated with real, living organisms.

The MIT professor and founder of the Mediated Matter design research group at MIT’s Media Lab has rightfully been enjoying a celebrity-like status in the 3D printing industry.  This was most recently evidenced when Oxman presented her Mushtari project at TED2015 in Vancouver, unveiling what is described as the world’s first “3D printed photosynthetic wearable, embedded with living matter”. Even if you read 3DPI often and are no longer surprised by just about anything, this concept might be a little out there. 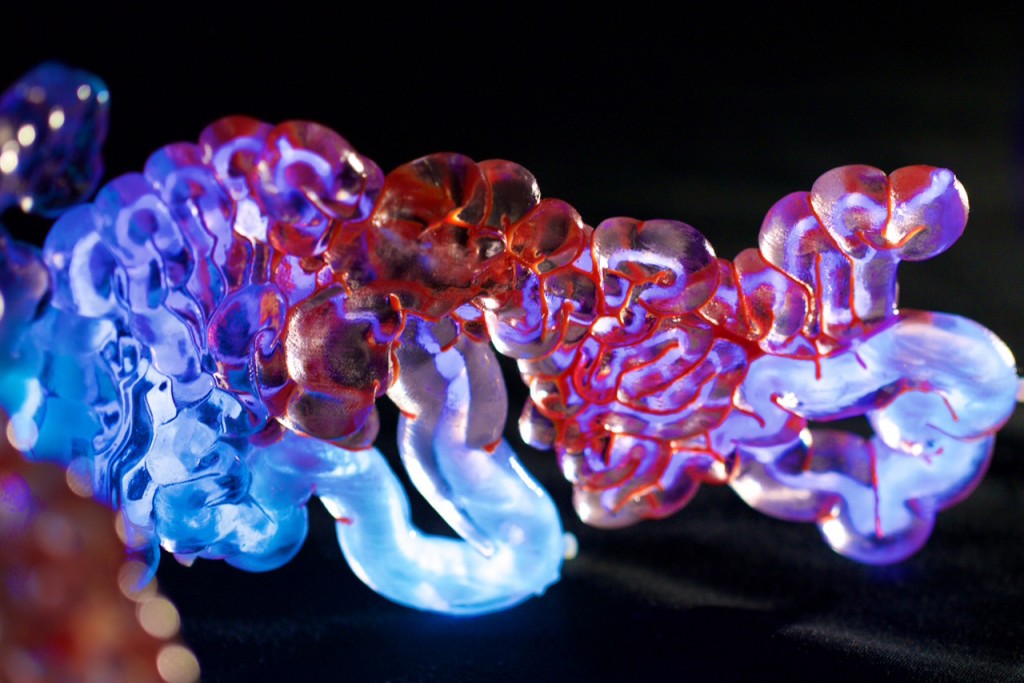 In fact, the idea is quite out there: Mushtari is a continuation of a piece from Oxman’s “Wanderers: An Astrobiological Exploration“, part of ‘The Sixth Element’ design collection, curated by Stratasys for EuroMold 2014.  Wanders saw the designer and her research partners (which include members of the Mediated Matter research group, the Laboratory of Prof. Pamela Silver at Harvard Medical School, and Christopher Bader & Dominik Kolb from Deskriptiv) develop concepts of wearables capable of augmenting human capabilities and making life possible on inhospitable planets.  The next step for the professor was to introduce living matter.

“We live in a special time, alongside the latest advances in computational design, materials engineering, synthetic biology, and additive manufacturing,” said Oxman, who was among the first to describe 3D printing as a radical “paradigm shift” several years ago. “This is the first time that 3D printing technology has been used to produce a photosynthetic wearable piece with hollow internal channels designed to house microorganisms,” she explained. 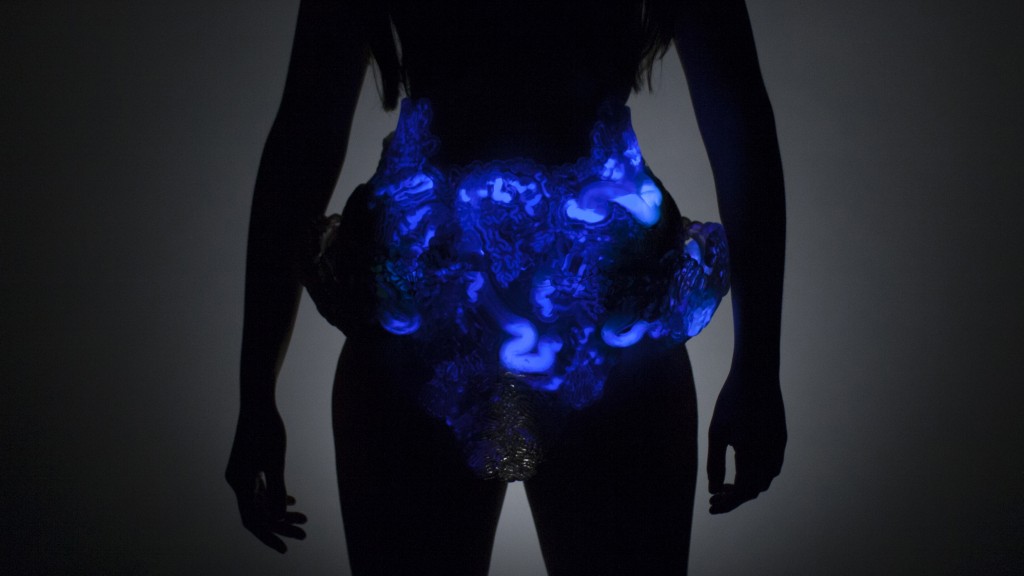 Inspired by the human gastrointestinal tract, Mushtari (which means “huge” or “giant” in Arabic) is designed to host synthetic microorganisms – a co-culture of photosynthetic cyanobacteria and E. coli bacteria – that can fluoresce bright colors in darkness and produce sugar or biofuels when exposed to the sun. The underlying concept is that such functions will, in the near future, augment the wearer by scanning our skins, repairing damaged tissue, and sustaining our bodies in ways that are inconceivable today.

Imagining exactly how those microorganisms might aid us is a job for designers and artists such as Professor Oxman, with whom Stratasys has built a fertile collaboration, benefiting both parties involved and the industry (additive and bio manufacturing) as a whole.

“We push each other to the edges of expression and technological capability,” said Naomi Kaempfer, Creative Director Art Fashion Design at Stratasys. “3D printing Mushtari is a wonderful example of how far this collaboration can bring us. The fluid channels in the wearable stretch to around 58 meters, with an inner channel diameter ranging from 1 mm to 2.5 cm, frequently turning sharply in new directions.”

Kaempfer explained that “clearing the support material out from such a long, narrow and complex structure to create the hollow channels for living matter presented a significant challenge. Stratasys’ R&D team,” she pointed out, “went beyond the boundaries of our existing technology, formulating a dedicated improved support structure to allow a smooth, effective process in support of Professor Oxman’s vision.” 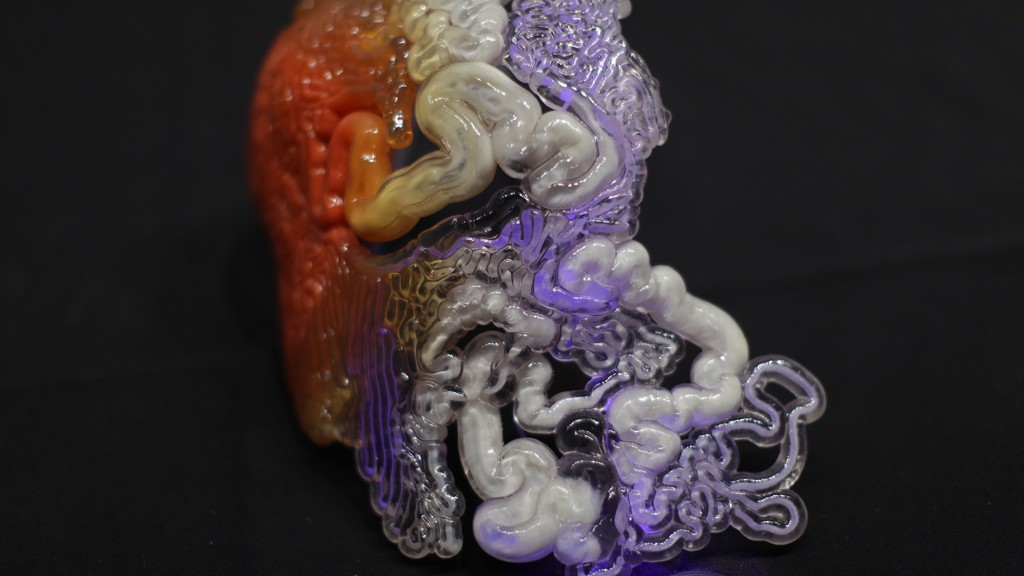 The capabilities of the Object Connex3 are still largely unexplored, as traditional industries struggle to figure out exactly how to fully exploit multi-material, multi-density, and multi-color digital manufacturing. Experiments such as this and previous ones carried out by Professor Oxman – which include the Gemini lounge chair and the Mythologies of the Not Yet Exhibit at Pompidou in Paris – push the limits of technology.

In this case, Oxman and her research partner Will Patrick created a a large fluid network that varied in transparency from opaque to clear, thus enabling varying levels of transparency and translucency to be designed into surface areas where photosynthesis was desired. Channels and pockets were then implemented to enhance the flow and functionality of the cells. This can only be achieved using multi-material 3D printing with high spatial resolution for manufacturing.

“In the end, it is clear that the incorporation of synthetic biology in 3D printed products for wearable microbiomes will enable the transition from designs that are inspired by Nature, to designs made with and by Nature, to, possibly designing Nature herself,” says Neri Oxman as she reflects on the future. Artificially creating nature through generative processes is what real computer aided manufacturing is ultimately about.