Cardiac-based surgeries are no walk in the park, even for the world’s top surgeons and doctors. Oftentimes, surgical plans have been mapped out on a generic model of the human heart, which has been inefficient due to the differences in shape and function that these patients’ hearts have. That is why researchers from MIT are working with the Boston Children’s hospital to take MRI scans and create detailed models of each patient’s heart, which will ultimately allow surgeons to plan their cardiac operation accordingly before ever physically cutting the patient open.

This type of technology was available in the past, but has been impractical up until this point. Previous 3D printable heart models were created by manually mapping out boundaries shown on an MRI, but the scan produces over 200 cross sections within the heart, a modeling process that takes up to 10 hours to complete. But this newest project, led by MIT’s electrical engineering professor Polina Golland and MIT graduate student Danielle Pace, along with cardiologist Andrew Powell (who is leading the clinical work within the hospital), has implemented algorithms into the scanning process that help cut down the time needed to make the 3D model. The algorithm works by identifying the boundaries of just a few cross sections within the heart and allowing the program to produce the rest of the model automatically. By manually scanning a few boundaries and letting the algorithmic generation take care of the rest of 3D modeling, the digital model is created in just an hour (down from the 10 hours it previously took). 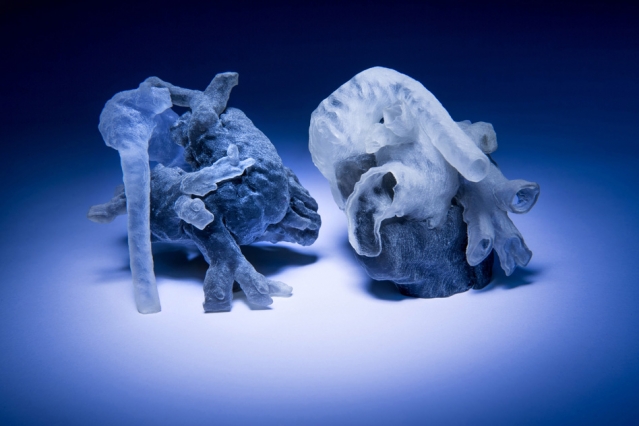 Pace and Golland’s new 3D modeling process will undergo a clinical study this Fall, where 10 patients at the Boston Children’s Hospital will have their MRIs transformed into a 3D digital model (and possibly a 3D printed model, too). Using these 3D models, surgeons will attempt to plan out a ‘virtual surgery’, hoping that having access to a 3D model of a given patient’s heart will improve the outcome of the actual surgery. Although the experiment hasn’t been thoroughly tested as of yet, both MIT and the Boston Children’s Hospital think that this new modeling process has an abundance of potential promise. One of the hospital’s cardiac surgeons involved with the experiment, Sitaram Emani, strongly believes that this new rapid 3D modeling algorithm will help with procedures. “We have used this type of model in a few patients, and in fact performed ‘virtual surgery’ on the heart to simulate real conditions,” Emani said to MIT News. “Doing this really helped with the real surgery in terms of reducing the amount of time spent examining the heart and performing the repair.”

Pace and Golland hope that their algorithmic-based modeling process will help offer surgeons a more intuitive way to prepare for cardiac surgery, and will describe their system in October at the International Conference on Medical Image Computing and Computer Assisted Intervention. Hoping to implement scientific innovation into the medical industry, this team of highly-esteemed researchers and surgeons are working to make intensive cardiac surgeries a procedure that can be better prepared for, and thus, better taken care of too.