What some Makers are discovering is that, in building 3D printers, some of the components need not be built at all.  In fact, there is plenty of discarded material that, while considered refuse, would be perfectly suitable for constructing a RepRap. Just take a look at W. Afate out of Togo for an example. Instructables user gmdownes found that the part of his Prusa Mendel V2 that could most easily be made from upcycled materials was the frame.  All you really need is a rigid structure and, in a modern world made up of so many boxes, it wasn’t hard for gmdownes to find a suitable box.  With a simple milk carton crate, gmdownes had himself the perfect frame for his MilkRap: 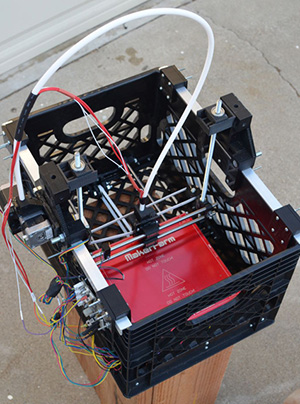 I either saw or remembered seeing piles of milk crates sitting behind a convenience store getting dirty and abused, or milk crates being used as shelving in a college dorm, or as a  step stool in a mechanics garage, etc. It struck me that milk crates are everywhere you look and are also built to be very strong. As it turns out, the interior dimensions of a rectangular milk crate is big enough to insert the working parts of a Prusa Mendel and achieve the same build area in the X and Y direction and……… get even more buildable area in the Z direction!!!

The ingenious Instructables user discovered that not only did the milk crate make for a strong, pre-manufactured, and portable frame, but that it also allowed for a larger print volume.  Without the cross support necessary in a Prusa Mendel V2, thanks to the crate’s rigidity, he was able to expand his Z-axis height and, with a couple of modifications, his X-axis space to almost double his build volume from 287 in3 to 542 in3.

So, after you’ve got your milk crate frame, you’ve just got to download and print a few custom parts designed specifically for the MilkRap, drill holes into your crate, and begin assembling.  Many of the parts, like threaded rods, motors, and electronics, are part of any RepRap design and gmdownes gives a complete list of the parts that he’s used in his design for anyone out there wishing to build their own.  gmdownes insists that it’s possible to extend the Z-axis indefinitely, though you may need to rely on some added support structures to maintain stability.  I’ve included a gallery of some of the images from his build to show just how similar the MilkRap is to any other RepRap, but with a simpler frame:

What I think is really great about this project is that it favors sustainability and a DIY attitude to improve upon a design, rather than overly complex technological showmanship[1].  The implications of such a solution are profound, hinting that, to save the planet from environmental destruction and to push human progress forward, we need only to simplify and make use of what’s around us and that the future will not look like the glossy white walls promised by Apple and eluded to in 2001: A Space Odyssey, but more like Tank Girl or Mad Max with, if we can trust the structural integrity of Universe, a utopian twist.  Or, if the future is determined by gmdownes himself, maybe it will look more like Bill and Ted. 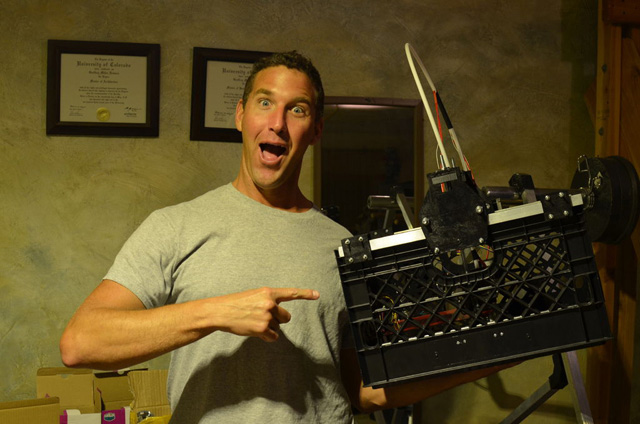 [1] Now, if only gmdownes could do the same for the Form1.