Having woken up early this morning I made a concerted effort to get to Hall 11 of the Frankfurt Messe for Day 2 of Euromold as early as possible. My main motivation was to get in ahead of the hoards of people that swamped the exhibition throughout the day in order to get to two companies that I couldn’t get close to yesterday due to the crowds of potential clients sourcing information. Happy to say it worked. I got onto the Renishaw stand with ease before 9am to say hi to my long-term friend Steve Crownshaw — always a pleasure. Then I got chatting with Robin Weston, Renishaw’s marketing manager to find out what was new. Machine wise, they have active metal machines, but in terms of what’s coming, it’s all going on behind the scenes — Renishaw is placing a great deal of emphasis on developing the selective laser melting platform it acquired when it bought MTT a couple of years ago into a wholistic manufacturing process. What that means is that they are working on an end to end scaleable  and fully stable manufacturing process solution for their customers that is not just about the additive manufacturing process itself — it includes that of course, but will ultimately include monitoring and measuring and quite a lot more besides. But I’m not allowed to go into detail on that.

As an aside, I‘ll warn you now, that emerged as a trend today, lots of “off the record” conversations. Probably an equal split between new developments (processes and apps) and lambasting. Fascinating, to say the least.

Back to Renishaw, what they did show was the first iteration of a new application — a metal 3D printed bicycle frame — for Empire Cycles. This is actually an ongoing project, that originated from the optimization of one part of the frame. In fact the whole frame has now been 3D printed but it is now believed that further optimization can be achieved — maximizing one of the key benefits of the technology for the whole bike. 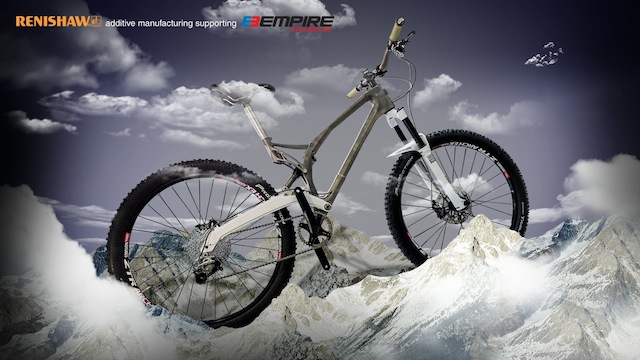 I then homed in on my second early morning target — Arburg. The FreeFormer 3D printer was announced almost two months ago now during the K Show in Dusseldorf. Noone was expecting it, and it caused quite a stir. And well it might. I spent quite some time with Dr Oliver Kessling this morning, the Department Manager for Plastic Freeforming. This machine is working now, producing some good parts, probably on a par with the mid range FDM machines. But while others have disputed it (with me and in general) that is where I believe the similarity with the FDM process ends. For a start, the dual extrusion head set up permits the easy and seamless printing of two different materials. Beyond that, there are two significant USPs that set this machine apart, namely the materials and the cleanness of the process. Bear in mind this is a 3D printer processing plastics — thermoplastics in standard granulate form that can be sourced from any supplier. What’s more the plastics can be colour-matched to any brand using traditional masterbatch processes without affecting the printing process. Despite being a 3D printer of plastics, this is being pitched as a clean machine — with no pneumatic system, water cooling or active extraction. It’s going to be very interesting to see just how much this market entrant disrupts the status quo. Realistically, it won’t happen quickly. It will take some time to fully embed. Oliver told me that despite the huge interest, which is gratifying, Arburg will be placing the first units with manufacturing customers in Germany during Q2 next year to allow for servicing, support and refinements. From there, the plan is to roll them out further afield. 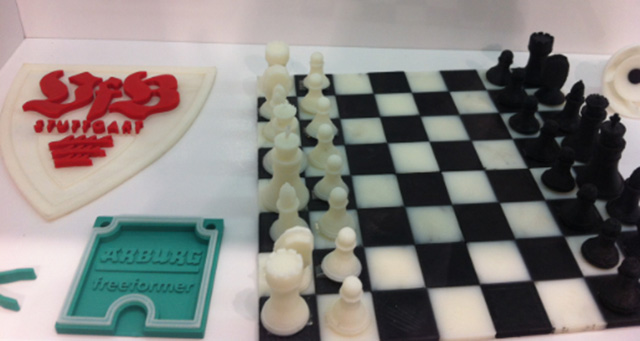 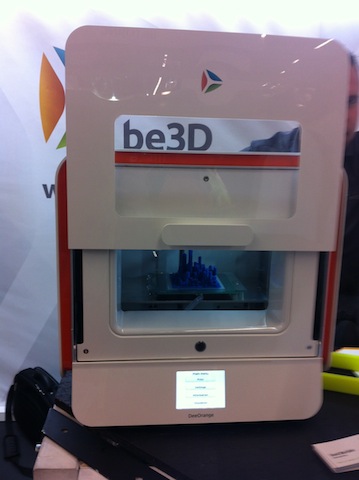 Before my first scheduled interview today with SLM Solutions I managed to stop and find out more about the J Scan from egs. This is a new 3D scanner that uses structured light technology. The first dental version of this scanner was launched earlier in the year, while Euromold saw a second product dedicated to jewellery and small intricate products. As I pulled away from this stand I spotted another 3D printer I hadn’t seen before — the DeeOrange.

Indeed this is another 3D printer produced locally in the Czech Republic by Be3D that was launched at the beginning of this year, not dissimilar to the Portuguese BeeVeryCreative. What was new at Euromold, suggesting the company is doing ok, is the DeeRed — a professional and significantly larger version of the platform, priced at €15k.

I then spent the next hour or so interviewing Dr Markus Rechlin, the new CEO of SLM solutions, ably accompanied by the lovely Stefan Ritt. It’s all recorded and transcription will take place after Euromold (did I mention I bought a dictaphone last week, because I’m fed up of not being able to read my own writing from note taking during interviews? Well, I did. Not a good idea to keep dropping it though!). Stay tuned some interesting things discussed — not least the history of the SLM process. 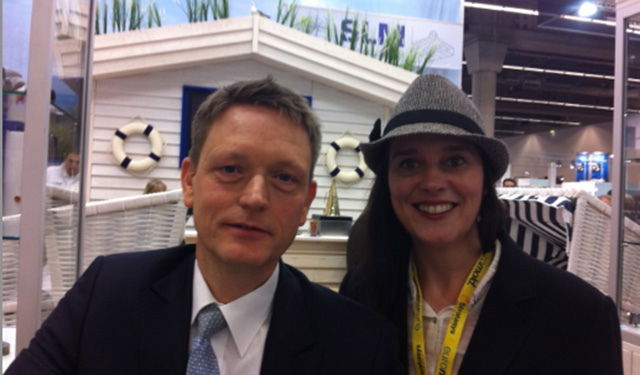 Then it was on to the PolyShape stand to find out more about the mysterious email I had from Lars Ryberg of Arcam on Monday last. Turns out Arcam was launching its new, larger EBM platform the Q20 — once again it’s about going bigger, and faster, all while achieving a higher resolution of parts. Talking to Isak Elfstom, Arcam’s Vice President R&D, some serious engineering and tech developments have gone into this machine to achieve some impressive results. I say impressive because the reason we were at the Poly-Shape stand was because Poly-Shape has already placed an order for the Q20, which is scheduled to be delivered in February to the manufacturing service provider. The Q20 will sit alongside the vast Concept Laser platform and the SLM 500 platform that Poly-Shape already utilizes to fulfill metal manufacturing applications for its global clients. 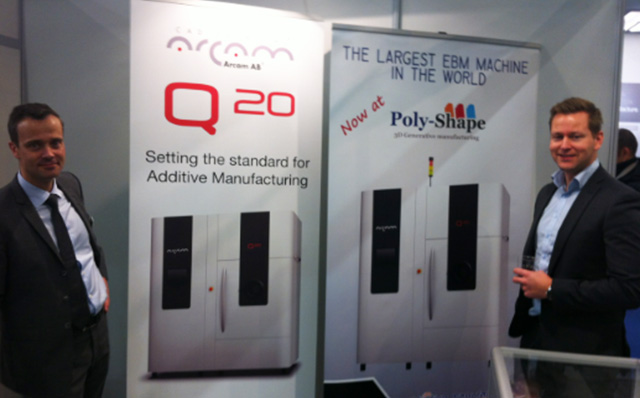 And then, although I did lots of walking, the rest of the day was more relaxed, spent, as it was, gossiping networking!

I finally got to meet some wonderful 3D printing people in the flesh! People that for a long time now I have regularly networked with in the digital realm. Really, I love twitter/facebook/linked in, and they are so very useful and enjoyable, but nothing beats face-to-face, looking someone in the eye and seeing them smile. Jochen Hanselmann (@DscheyH) Bram de Zwart of 3D Hubs and Deepak Mehta (@deeeep). I could happily have sat chatting to these guys all day — insights from and the knowledge of these people is phenomenal and inspiring. Particularly Deepak’s stories about his 13 year old son’s adventures and opinions of 3D printing. Expect to hear only great things in the year’s ahead — he’s a prince at the moment, I would not be at all surprised if he is crowned king at some point in the future. 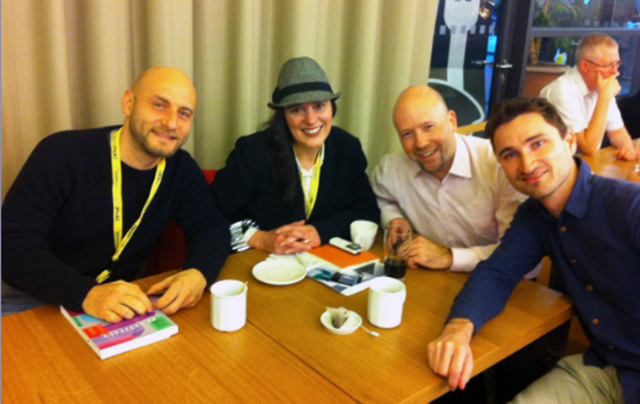 Then I went to meet the latest addition to the 3DPI writing team — Davide Sher. Things are only going to get better!!

I also got a chance to speak with Florian Horsch. I can’t overstate how lovely this guy is and it was an absolute privilege to spend time with him. Florian’s new book (currently only available in hardcopy in German— although e-versions in both German and English are imminent) has just been published by Hanser. He insisted on me taking a copy despite my atrocious German, which stretches to “Danka”!! But it’s inscribed, so how could I possible refuse? This guy’s talent and expertise are a given — the Delta Tower 3D printer and the applications coming off it, as well as the aforementioned book are testament to that. But leaving those things aside for a second, Florian’s approach to 3D printing and the market(s) around it is right up there with the best I have EVER come across. His instincts tend towards the open source community and to that end he is extremely proactive and giving, but even while he allows his ideology to guide him he is also a pragmatist and appreciates there has to be some commercial value in what he does that permits him to make a “decent living.” Nothing more, nothing less. For me, he has the balance just right. Total respect.

From then on it was a combination of planned, semi-planned and completely coincidental conversations. Absolutely fantastic — and unexpected — to see Dan Johns (previously of Airbus and then the Bloodhound project). Dan is now CTO for GKN and he is on an AM mission. The rest was off the record, but a lot more to come from him. Met the new AMUG vice president, Bret Bordner, as well as past president Gary Rabinivitz. Then as the day drew to a close the hoards of people constantly populating the digifab space in the entrance to Hall 11 finally thinned and I got chance to drop by iGo3D, who had a new announcement — Innofil3D, which they will be supplying and marketing via the online and bricks ‘n’ mortar stores. Also caught up with the Kuhling brothers who have been inundated with enquiries, doing extremely well and reporting good growth.

My final pit-stop was to speak with Avi Reichental having promised to do so yesterday when speaking with Cathy Lewis. His partiality for nomenclature around 3D printing I simultaneously appreciate and find amusing. The latest is 3D Printing 2.0. I do think he has a point, namely that we are at the end of the beginning (30 years in) and heading into the next phase. His other point, to me at least, was that if we carry on only using industry jargon, we’re likely to ‘scare the crap’ out of the consumer market (the end goal). Not sure I’m wholly persuaded by that one, but neither is it invalid – new tech and new jargon go hand in hand, but then people do need encouragement to engage. Also, the 3D printed drums were produced at Avi’s behest. It’s been a personal aim of his for the last couple of years and having tried a number of avenues that turned in to dead ends, it was only after meeting up with Olaf Diegel in Singapore at the Inside 3D printing event, that his dream finally came to fruition — within a few weeks!

I’m looking forward to tomorrow, it will be a little slower than the last two days as I am attending much of the Wohlers conference taking place during the day. And you know what that means — more Twitter time!! But I am also due to meet two of my favourite 3D printing girlies who are due in to Euromold for the day — Vanessa Palsenberg (Materialise) and Lisa Henshaw (Fourth Day PR). There may be some more gossip and maybe even some giggling — I hope so anyway!!