Deep down we all know it: of all the things that 3D printing can, and will, do, one of the first industries where the mass public will come to grips with its full potential for customization is toys. And cars. And toy cars. So the Modarri, a little “Mod” and a little “Ferrari”, is the perfect example. 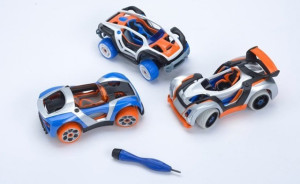 It is – or, actually, it will be – since it is still a Kickstarter project in its infancy, a finger powered toy car. That means that it will work like those miniature finger skateboards that kids use to do amazing tricks using just two fingers. With a finger in the driving seat and one in the back, the Modarri will be able to do figure eights, drive in circles or spin, kick, jump and pop wheelies. Since 3D printing is perfect for making miniature clones of anything, including oneself, a miniature acrobatic car is certainly a fine potential application of the technology.

3D printing is also great for prototyping and modifying car parts. The three different base Modarri models (Street S1, Dirt X1 and Track T1) will be very “Mod-ifiable”. They will have real steering and suspensions and the included hex tool will allow anyone to easily take them apart in seconds. You’ll be able to swap parts, paint them, and yes — this is where 3D printing really comes through — design and make your own.

Just pay a quick visit to the website, www.modarri.com, choose custom materials and colours and order the part you desire. You’ll be able to substitute broken parts and even download the CAD files to design each part from scratch. Of course Social Media will play a big part as far as the bragging rights for the best design are concerned: after all kids (and grown ups) have been doing the same thing, virtually, with video games for quite some time now: isn’t it time to “get physical”?

If you think so you might want to contribute to get Thoughtfulll Toys, the company behind the Modarri project, to their 80,000 dollars funding goal. If reached, the Modarri will likely be launched at the next New York Toy Fair in February 2014.