3D printing is more delicious than ever. With more than 1,000 Kickstarter backers, PancakeBot is the world’s first 3D pancake printer. 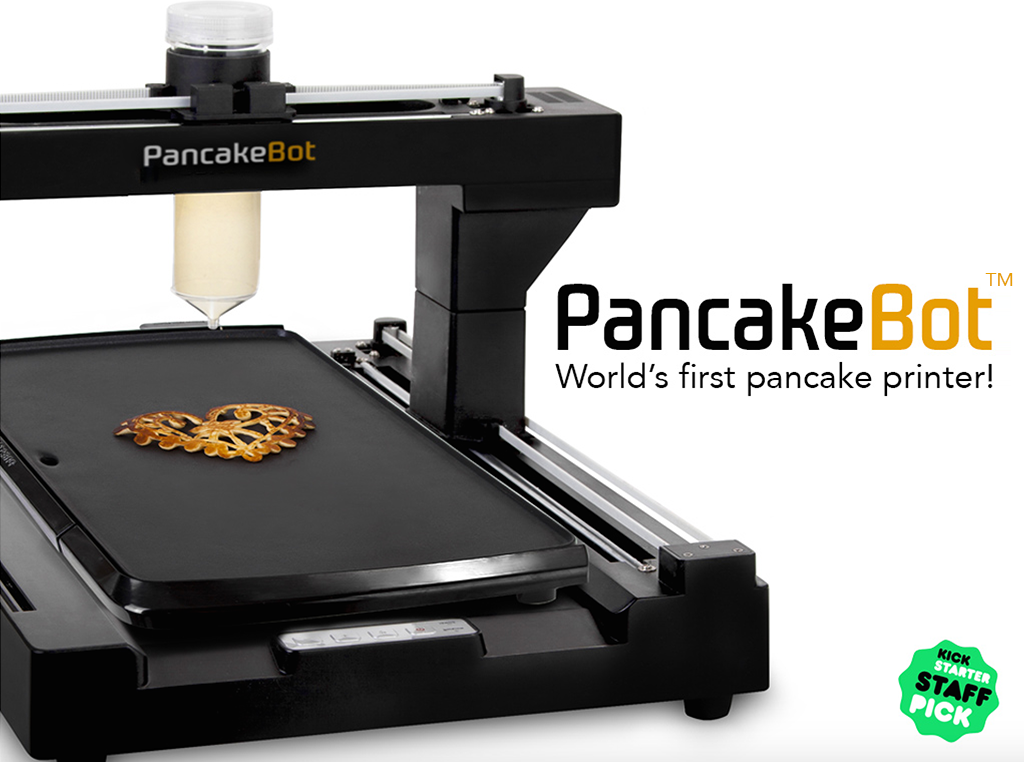 “It’s a project I did for my kids to get them inspired. It’s a family project,” Miguel Valenzuela said about his invention. Valenzuela is a civil engineer, inventor and father living in Norway.

Launched in 2013, PancakeBot won’t hit stores until mid 2015, but Kickstarter backers can get their own for half the anticipated retail price by pledging $149 dollars.

PancakeBot was first prototyped as a LEGO model before Valenzuela made it into the current machine. He explains, “I’ve always wanted to dabble with 3D printing, especially since it was coming online with Makerbot. I learned how to program with LEGO code, pretty much spent six months making a pancake machine out of LEGOs. We posted the video on YouTube and then it went viral. It was all made out of LEGOs except for the ketchup bottle”

The idea originated with a question from Valenzuela’s daughter, as he was reading an article in Make Magazine about prototyping with LEGO, Valenzuela said. “My daughter Lily asked, ‘What are you doing, dad?’ and I said I was reading about a guy who made a pancake stamping machine out of LEGOs. Her eyes opened up really big, and she turned to Maya, her sister, and yelled, ‘Papa’s going to build a pancake machine out of LEGOs!’”

Valenzeula began bringing his PancakeBot LEGO prototype to Maker Faires including one at The White House. After partnering with “product innovation company” StoreBound, he began a Kickstarter campaign in order to reach a wider audience and bring the project to stores later this year.  PancakeBot, which comes with pre-loaded designs and an SD card for custom designs, lets users create pancakes in any pattern they can dream of.

And, yes, then you pour syrup on it and eat it.

I spoke with Valenzuela, who revealed more secrets about his bot.

Lucy Vernasco: How long does the process take?

Miguel Valenzuela: It depends on the size of the pancake, of course. For a simple one, it can trace the outline of something in 45 seconds to a couple of minutes, and then it needs to come back to fill. You can do the fill by hand, or you can do the fill with PancakeBot. You’re looking at three to four minutes for a decent-sized pancake with a custom design and logo on it. 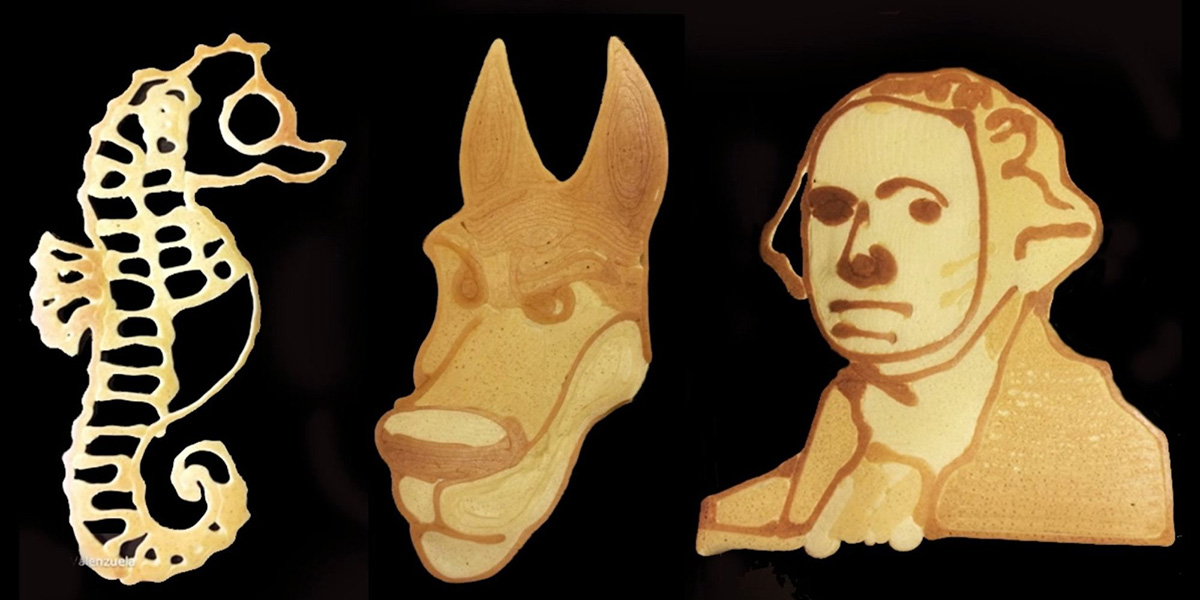 LV: How does PancakeBot work?

MV: The way it works is that you import the image for the background into the software. Then, you have a window where you trace over the background. You trace lines. There are no curves, just lines. If you want to draw a circle, you draw a bunch of small lines. Once you draw your dark lines, you go back and you click a [15 second delay] into it. That allows the brown stuff to cook and get browner. Then you come back and do the fill. The fill fills it in with a lighter batter. Then you give it a flip and you have your image revealed to you. Every time you flip the pancake you don’t know exactly what you’re going to get, because you don’t know how long it’s cooked. The cool thing is the reveal. Like ‘ooh, look at that, it came out perfect.’

You can print layers, but it’s very limited in the amount of layers it’ll print. The main thing is that pancake batter is in this liquid form, so it’s not like taking an apple and making it into liquid form and squirting it out. So, there’s a natal progression of going from pancake batter to pancake. That’s what’s really cool about this. For stuff that has the same viscosity as pancake batter and you can cook it, the sky’s the limit on that. We use 3D printing technology and the idea of food and cooking. It’s the only printer out there that actually cooks food while it’s being made. We went from LEGO to this.

LV: How do you hope people use Pancake Bot?

MV: Number one, I hope people will make pancakes out of it. I don’t want it to end there. I want people to look at what we’ve created here as a tool for learning, a tool for exploration, and a tool for inspiring kids to look at technology in a different way. Now what we’re doing is we’re putting a computer system and machine into the kitchen and you can tell it what to do. You’re the artist now. We’re looking into allowing the user to hack it. They can upload their own programs to it, and draw out custom shapes. It would be nice to see it at places like Disney Land, resorts, hotels.

LV: Do you ever get tired of pancakes? 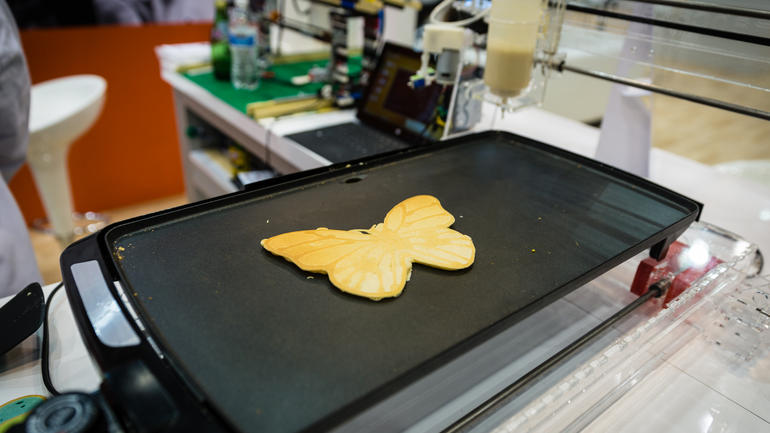 LV: Have your kids been inspired from you invention?

MV: Totally! Now, my kids are inventing stuff and making things. They’re playing with robotics and [are] interested in programming. The kids look at things differently now. They say, “Dad, can you build a robot for this?” They’re seeing now that technology can be used on a daily basis.

This project would not have been possible without the Maker community, because this is one of the reasons we decided to do it, is to inspire kids to get involved with technology. The Maker community has been very awesome in helping us out. 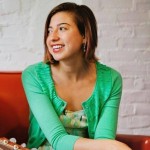 Lucy Vernasco is a freelance health and technology writer whose work has appeared on The Daily Beast, Bitch Media and Ms. Magazine. Follow her @lucevern.