The Polar 3D Printer: It's Neither Freezin' Nor Cartesian

Cincinnati, Ohio-based Polar 3D has a very slim, minimalist 3D printer.  At first glance, it doesn’t really seem like anything unusual.  But Polar 3D claims that this is the first personal 3D printer designed to print based on polar coordinates, rather than Cartesian coordinates. 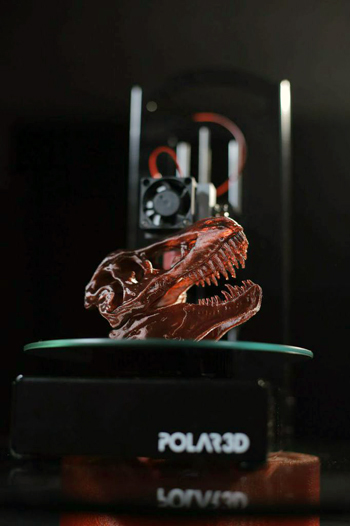 To say that it relies on polar coordinates means that their machine’s extruder does not move along an X or Y axis.  Rather, it only moves up and down on the Z-axis and the build plate, which is actually a mirror, spins instead.  Actually, the extruder does move about four inches along what would be the y-axis, but most consumers might not care about these sorts of details. They care about print quality, speed, and build volume.

But, the Polar 3D prints surprisingly large prints for its diminutive stature.  And, despite the machine’s unique build process, it is capable of achieving layer thicknesses that match other desktop FDM/FFF machines on the market.  Check out the specs:

It also features a built-in 1080P wide-angle HD camera that allows for remote viewing of print jobs. See it in action in the promo video below:

While the start-up has been beta testing their printers over this past year and their fabricators are now in six universities and ten secondary schools in the country, the company made a more official debut at CES 2015, where they introduced three of the company’s prime directives:

The Polar 3D printer has a price of $799 for individuals and $599 for students.  To learn more about this unique fabricator, visit the company’s website, or watch the video below.