In an attempt to profit off of the emerging Maker movement, Motorola has developed the MAKEwithMOTO ad campaign, leading to an outcome with a double-edged sword.

The MAKEwithMOTO campaign has a techie-filled van equipped with 3D systems 3D Printers, and a host of hacking tools driving across the United States and visiting college campuses and Maker Faires, like the flagship Faire in San Francisco, to encourage local young people to “turn hardware/software unlocked versions of Motorola’s latest smartphones into their dream device.”  They’ve already been to about half of the places on their trip, but they’ll also be hitting up all of the following places:

The hacked devices have, so far, been pretty neat.  For instance, at their MAKEaTHON at CalTech in Pasadena, CA, one team of students designed an Android app, named Talking Hands, and constructed a sensor-laced glove that allows a potential Motorola user to text via sign language. Another team developed a lost sock finding app called “Find My Socks”.  According to the MAKEwithMOTO site, “the team created tiny ultrasonic emitters which could be attached to keys, wallets and even socks.” Watching these smart students, engineers from CalTech and designers from Art Center College, affix Arduinos to the exposed backs of phones does bring a joy to your heart, knowing that human beings have the potential to plunge into creativity and return with some truly awesome ideas.  Check out the video of the CalTech MAKEaTHON below: 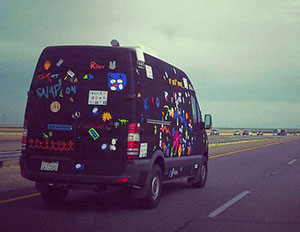 At the same time, though, it is clearly a marketing gimmick, not unlike the Red Bull Creation Challenge, that co-opts a really cool thing and makes it into a commercial thing reminiscent of MTV’s co-optation of grunge, hip hop, and pretty much anything MTV can get its hands on.  With their tagline “openness, irreverence, and awe” and YouTube videos that prefer musical montages over the delivery of useful information, Motorola sounds like a 39-year-old trying to look cool to a 19-year-old.

Still, it’s refreshing to see programming and mechanical engineering becoming the new hip trend.  Whereas hipsterism represented feigned intelligence lacking emotional depth, Makerism at least carries with it practical skills and know-how that could inspire young people to seek self-direction and drive.  And I’m sure that the members of the MAKEwithMOTO team and the people that they interact with are actually having a lot of fun inventing new apps and devices, regardless of phone company that they serve.