The 3D ecosystem is just beginning to take shape and, even though VR technology and 360 cameras have yet to saturate the mainstream, one company thinks that it’s about time to send that tech to space.  Today, SpaceVR kicked off a crowdfunding campaign to launch a 3D 360 camera to the International Space Station as a means of bringing outer space to the virtual space.  And, best of all, part of the camera  on the ISS itself.

On their Kickstarter campaign page, SpaceVR boldly proclaims: “Only 536 people have ever been to space; at SpaceVR we ask, what about the other 7 billion?” And, while it may not be possible to send everyone one of us to space in the immediate future, SpaceVR believes that, if they can send their Overview One 3D 360° camera to the ISS, they’ll at least be able to recreate the experience for us virtually via VR headsets like the Samsung GearVR, Google Cardboard, or Oculus Rift. What’s even more exciting is that the Overview One will be partially 3D printed aboard the ISS.

To pull this off, SpaceVR has partnered with Made In Space, whose Zero G 3D printer is currently churning out prints on the ISS, as well as NanoRacks, a firm geared towards sending payloads to space.  With help from NASA scientists and space engineers, the startup has designed the camera with the goal of printing its casing on the Zero G printer and sending the rest via Nanoracks later this year. Then, an ISS astronaut will assemble the device in space!

Once it’s aboard the ISS, anyone will be able to see space from the perspective of an ISS resident, starting with footage from the station’s Cupola module, which offers a large window view of the Earth.  All you’ll need is a VR helmet to experience the famous Overview Effect, described by astronauts. Edgar Mitchell, an astronaut on Apollo 14, explains the feeling in this way: “You develop an instant global consciousness, a people orientation, an intense dissatisfaction with the state of the world, and a compulsion to do something about it. From out there on the moon, international politics look so petty. You want to grab a politician by the scruff of the neck and drag him a quarter of a million miles out and say, ‘Look at that, you son of a bitch.’”

This is just one small step for SpaceVR, whose giant leap will be to, first, provide VR live-streaming from the ISS.  Then, in 2017, they hope to get another camera to the Moon! After that, an asteroid in 2022, followed by a remote controllable cube-sat VR camera.  Finally, in 2026, the Red Planet!

If you’re as enthusiastic about this project as I am, you can share it on social media with the hashtag #BeAnAstronaut or back the campaign and receive limited edition posters, VR access, and more  (complete rewards listed below). 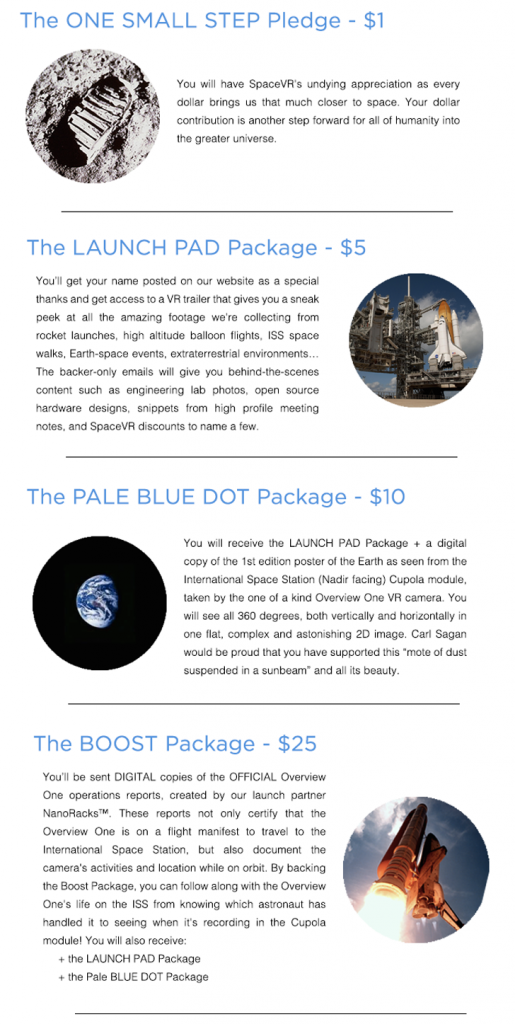