Kay Perry is no doubt one of the most popular singers in the world, at the moment.  At least, if you ask my 7-year-old niece.  But, if you ask Forbes, she’s worth at least $40 million (almost six times as much as Barack Obama).  The 2014 Prismatic World Tour earned $153 million, according to Pollstar.  And, she’s been the face of Covergirl and Pop Chips.  If the singer songwriter were to, say, use 3D printing in her tour, that technology would be introduced to the 1,407,972 fans attending her concerts.  Though not necessarily the reason for supplying the pop star with 3D printed props, Perry’s success provides ample motivation for Stratasys and Legacy Effects to 3D print the headgear for the luminescent mohawks featured in icon’s Prismatic World Tour.

Throughout the opening number of Perry’s current tour, the singer’s backup dancers tout beautifully vibrant mohawks made possible with Stratasys technology and Hollywood FX company Legacy Effects’ impressive design skills.  The headgear is inspired by the plumes worn by Roman centurions, but, implementing 21st Century LED magic, the mohawks shift colors at their peaks. 3D printing was used specifically to form the helmets themselves, along with the fixtures built for propping up the LED mohawks.  This allowed for the ability to tailor each piece to its wearer, giving every backup dancer a personalized helmet. 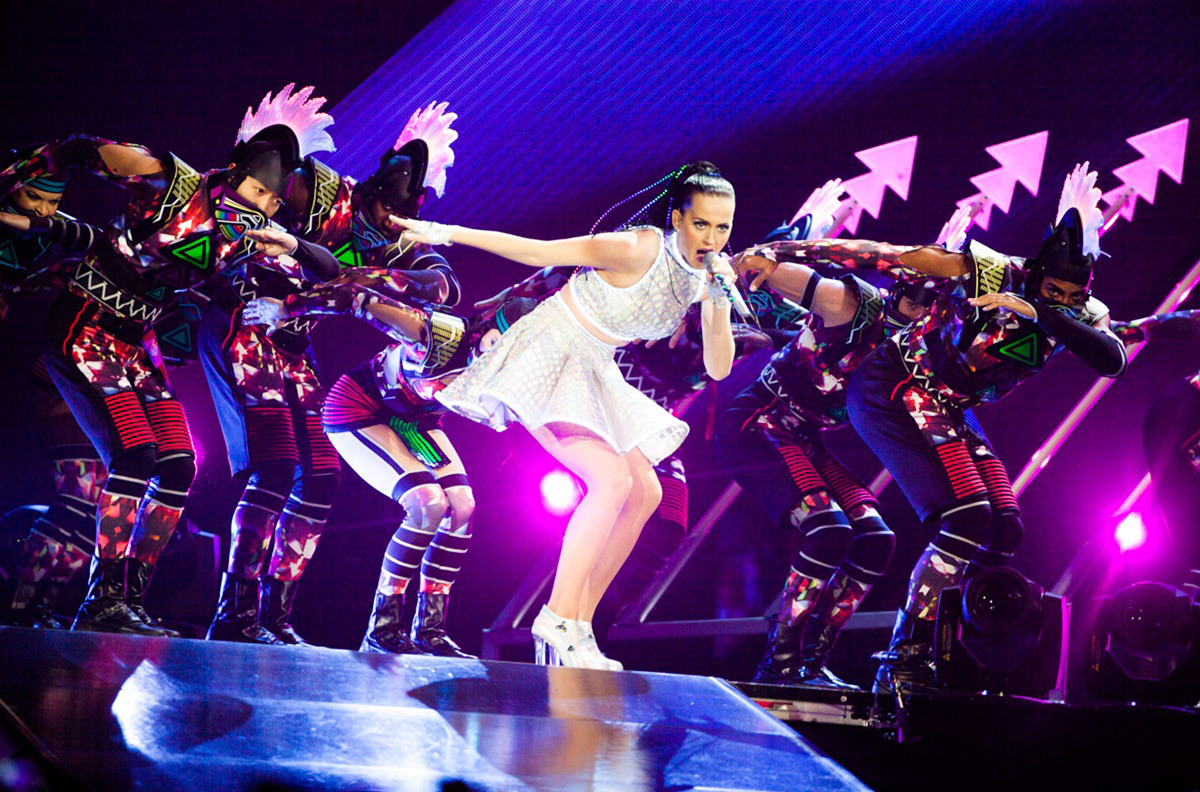 Jason Lopes, Lead Systems Engineer at Legacy Effects, elaborates, “When Katy Perry’s art assistant gave us the brief with such a short turnaround time, we knew instantly that creating something so complex and visually striking, with the need for durability, could only be achieved with 3D printing. Traditionally, it’s virtually impossible and very costly to produce such complex personalized pieces by hand, taking into consideration the time to work out the programming of the lighting elements. With Stratasys 3D printing technology, we were able to develop fully-illuminated pieces with a lightning fast turnaround of under a week. For developing one-off props for the music industry, this is revolutionary.” 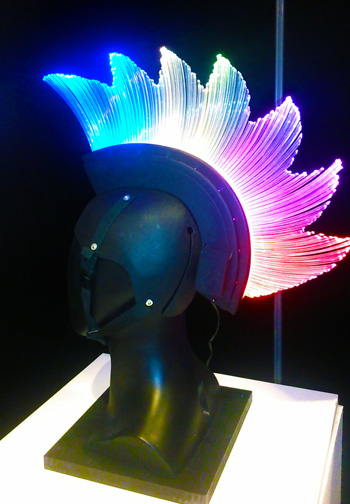 In order to craft the headpieces, Legacy Effects 3D printed their outer crests in durable ABS-M30, necessary to hold the entire piece together.  For the inset of the mohawks, the firm took advantage of PolyJet 3D printing, using Stratasys’ VeroGray material.  Lopes explains, “We wanted to amplify the bright colors of the mohawks to complement the dance routine and lighting throughout the performance and we knew that PolyJet’s ability to house a sheet of acrylic inside would ensure that the contrast in colors was emphasized regardless of the spectators’ position in the arena.”

Lopes adds, “This is hugely exciting for us as Katy is such a high profile client, but it also represents how 3D printing is enabling us to meet the complex demands of projects like these immediately and providing our clients results within a day. To see 3D printed end-use parts in action during a live concert performance is something else!”

Gilad Gans, President of North American Operations for Stratasys, gives his take on the project, “We are seeing more and more of our customers using 3D printing beyond just a prototyping tool, but as a way to directly manufacture some of the most complex parts as final products. In the case of Katy Perry’s head pieces, the ability to 3D print personalized one-off parts, customized to each dancer, is a perfect example of how the future of manufacturing is moving towards mass customization.”

The mohawks are set to be worn throughout the year-long world tour as the dancers perform alongside Perry during her opening number for the catchy and famous single “Roar”. You can see the mohawks twinkle on the heads of their dancers in the video below.  To see them live, you’ll have to find someone selling tickets outside of one of her sold-out shows.