Few fashion designers have experimented as intensively with new ways to introduce 3D printing and digital manufacturing techniques in haute couture clothing design and style as Iris Van Herpen. Over the past few years, often coinciding with Paris Fashion Week, this has brought us amazing experimental creations such as the Voltage, Wilderness Embodied, and Magnetic Motion collections, displaying new approaches to 3D printing growing in many different creative directions.

At the latest Paris Fashion Week, in an effort to keep pushing the limits of the imagination and of what digital manufacturing can achieve in the fashion world, Van Herpen presented the concept of a gown that is sown onto a person in real time, starting from the center and expanding in all directions creating a circle. This theme is what gave the name to the collection: Quaquaversal, Latin for “going in all directions from the center”. 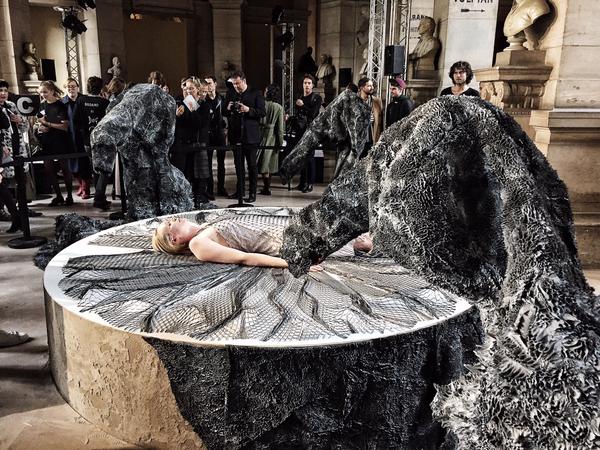 The actress who lent herself to be the subject of the Quaquaversal Show was Gwendoline Christie, who plays Brienne of Tarth in HBO’s hit Game of Thrones series and will also play Captain Phasma in the upcoming Star Wars: Episode VII film. Unlike recent collections, where 3D printing played a primary role as the manufacturing process for the dresses and accessories, in Quaquaversal, Herpen also made intensive use of other digital manufacturing technologies, including both laser cutting and CNC milling.

This approach also comes through in the many other items in the collection that were shown off on the runaway. The artistic installation with the Quaquaversal concept certainly did not go unnoticed. As Christie lay on it, three sculptural forms created by artist Jolan van der Wiel – which were somewhat reminiscent of “spectral robotic arms” – interlaced, printed, and cut the gown that spread around the actress in all directions. “Van Herpen’s work reveals the secret structures of our existence giving us a multidimensional experience of what it is to be alive, it is an investigation into the past, present and future in all its primal and mythological forms,” Christie stated.

Much like other creations by Iris Van Herpen, this collection was also inspired by natural forms. Specifically, in this case, the living tree bridges in India. “The beautiful potential of plants and other organisms to form living architecture inspired me to make a collection that is tangled like a maze around the body,” she said on her website. “Inspiration came from the way plants and their roots grow, and how roots have been used to grow living bridges in the forests of India. This tradition of growing bridges inspired me to re-envision my process of making a garment,” Van Herpen explained. 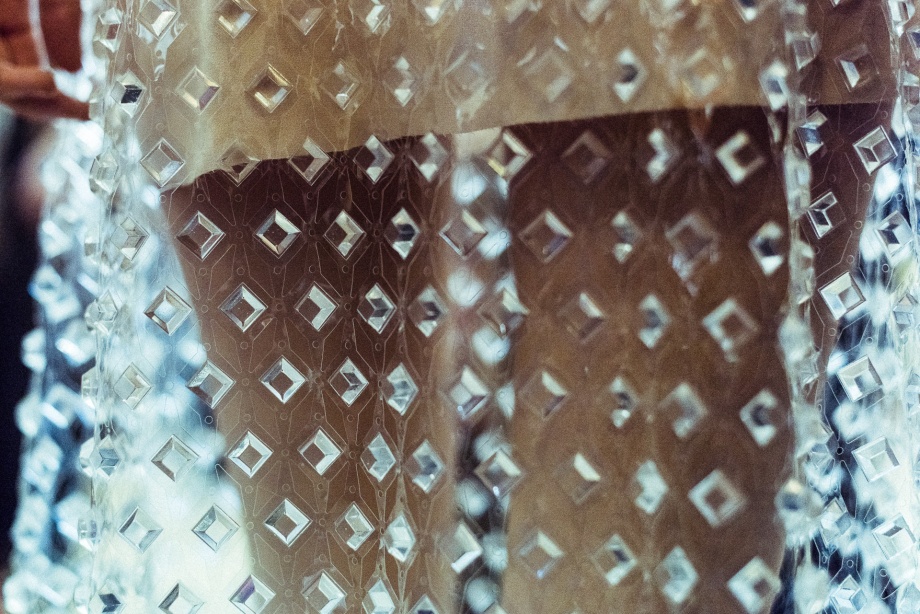 That of imitating natural lines and processes in manufacturing is one of the great new possibilities of digital manufacturing and 3D printing, in particular. It all starts with an idea and then grows in all different directions, most quaquaversally.