Getting a Taste of XYZprinting's New 3D Printing Treats in NYC

Since being founded in 2013 under the corporate umbrella of the Taiwanese-based Kinpo Group, XYZprinting has acted as one of the highest-selling manufacturers of consumer 3D printers upon the international stage of 3D printing technology. Already acting as a global leader in the production of printers, hard-drives, and calculators, the Kinpo Group created XYZprinting as their first independently functioning company in order to explore the potential of 3D printing technology without any limits or restraints. 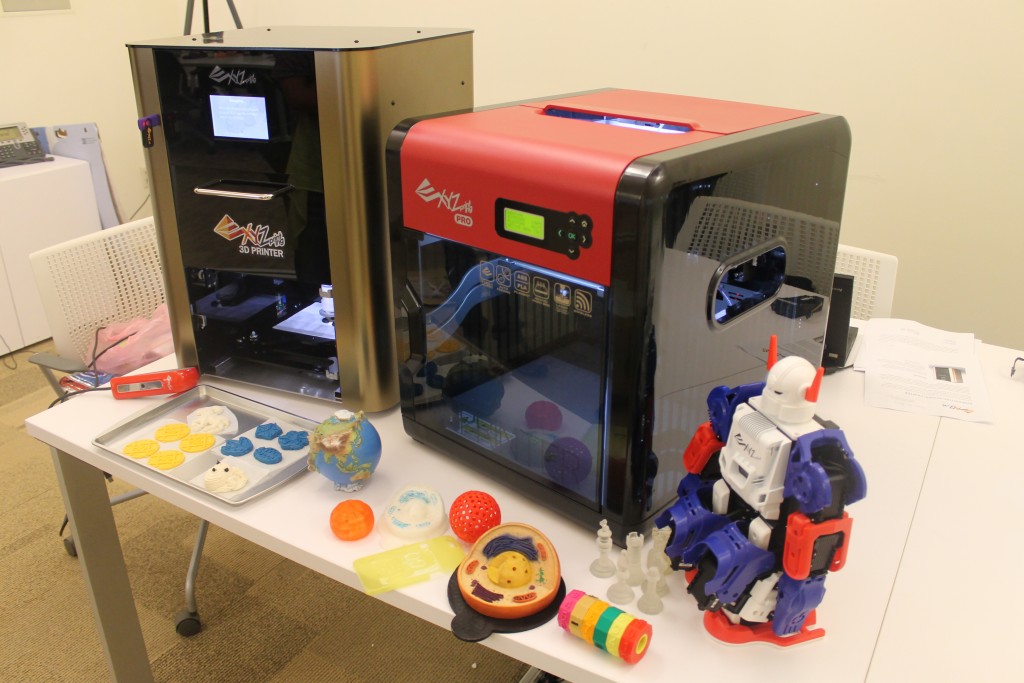 Specializing in producing affordable and accessible 3D printers, XYZprinting is constantly improving upon their 3D printing tech product lines, attempting to make 3D printing an exciting and useable tool for those with any level of experience. I had the opportunity to check out some of XYZprinting’s newest products at their demo in New York City earlier this month, where I sat down with Phair Tsai, the Business Development Manager at XYZprinting, to talk about their current (and future) plans to expand upon their product line while they attempt to also enter a more wide-ranging consumer market.

“Starting with 3D printing products, our aim is to lower the barrier between emerging technology and the mass market,” Tsai explained to me. “We’re trying to provide these new technologies as affordable and approachable as possible for users.”

This is precisely what XYZprinting aimed for with their earlier da Vinci products, a balanced combination between quality functioning and simplistic use, allowing the everyday consumer the opportunity to become acquainted with this emerging technology. The company is constantly taking customer feedback and improving their product design and functions, taking the da Vinci 1.0 to the 1.0a, which was then remodeled as the 2.0a, and finally as the da Vinci AiO, which is an all-in-one 3D printer and scanner. These 3D printing products were ideal for those who weren’t experts in the additive manufacturing field, yet still wanted to implement 3D printing into their various hobbies, small business models, and classrooms.

“We’re targeting schools, home use, and small- and mid-sized businesses because a lot of small companies and entrepreneurs want to try out their own designs,” Tsai says. “Previously they’d have to work with a workshop or factory overseas, but, now, with 3D printing technology, it’s so much easier to do so on their own.” 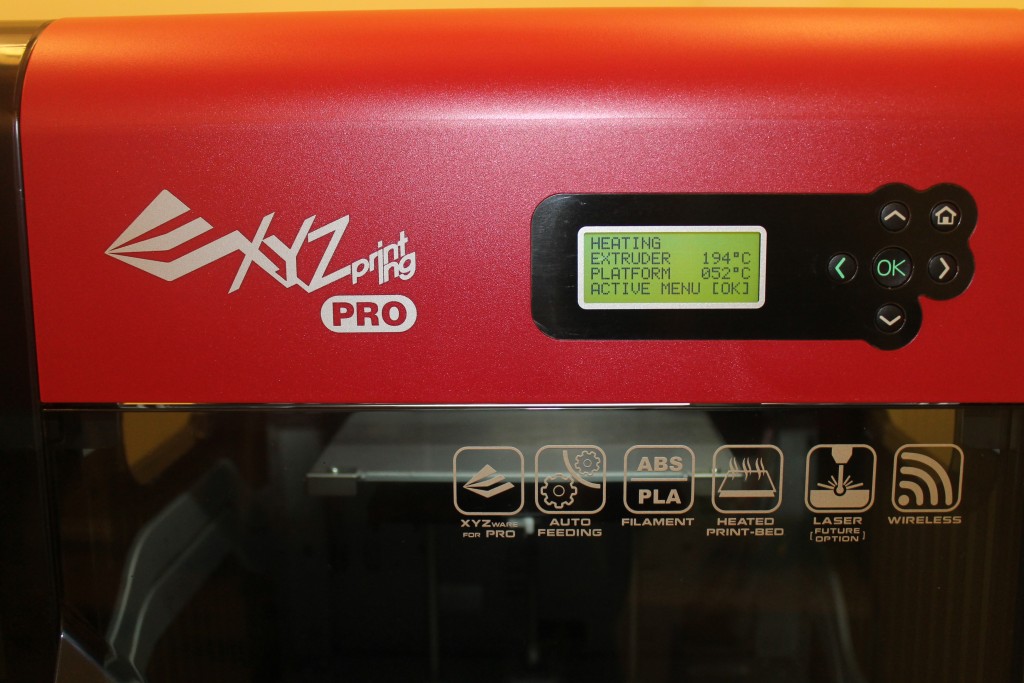 But, now, XYZprinting is approaching the next level from unexperienced consumers to prosumers, those who want more independent 3D printing capabilities than previous da Vinci models allow for. I was fortunate enough to arrive just as the XYZprinting team was setting up the da Vinci Pro for the first time in New York City, which has the first auto-loading open filament system of all the da Vinci printer products. XYZprinting’s (slightly controversial) proprietary filaments were, originally, the only materials allowed for use on their printers because the company states that it wanted to ensure quality functioning with their products. But calls from the Maker community to allow for third party filaments within their printers was recognized by the XYZprinting engineering team, and is a major selling point of the Pro model. But one characteristic that the team did not change on their more recent prosumer products is the sleek and easy-to-use design, following suit with LCD touch screens, clear printer enclosures, and an altogether modern and aesthetically pleasing design.

“It seemed very intuitive to us to have a sleek design because our consumers who are investing in our 3D printers care about the exterior and the appeal of the printer,” Tsai explained. “All of our da Vinci printers have a unified look, size, and shape, which also helps us to keep cost and complications down, and offer better quality.” 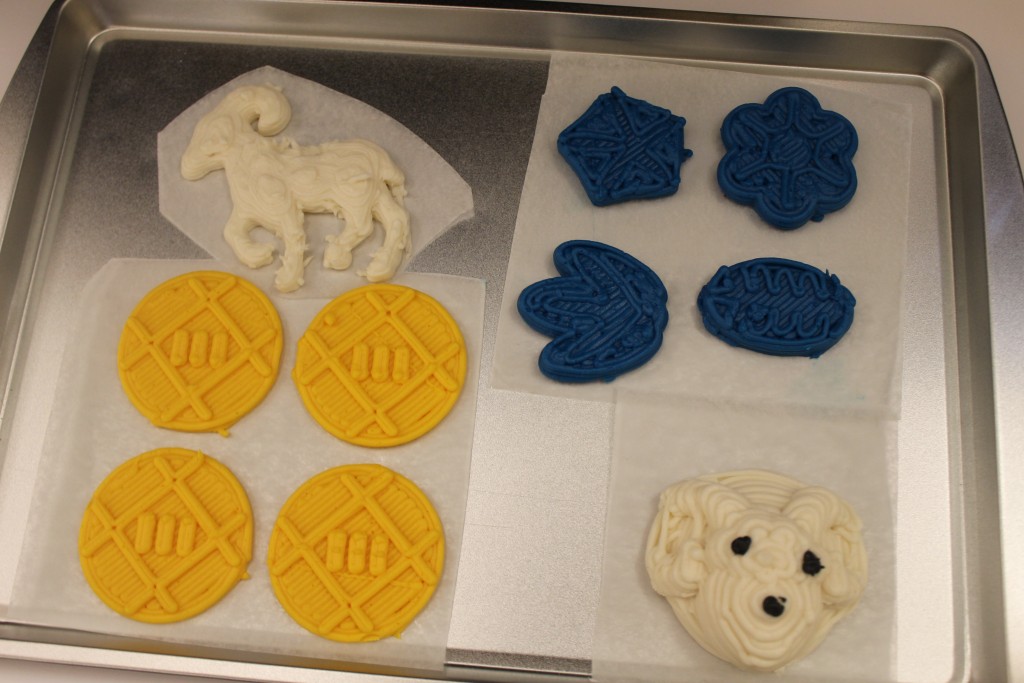 The da Vinci Pro also includes an aluminum print bed, which is the most durable and highest quality print bed used within the da Vinci product line thus far. It also comes equipped with an improved calibration system, WI-FI connectivity, a one-year warranty, and will cost $699. Another advanced product that XYZprinting is gearing towards the prosumer is the Nobel 1.0,  a stereolithography printer geared towards more tech-savvy engineers and students. Although the Nobel 1.0 laser printer was not displayed at the demo, I got a first-hand look at some extremely intricate and finely detailed prints from the SLA machine, which is reasonably priced at $1,499.

“Engineering students love the Nobel because it’s so affordable for the precision that can be achieved,” said Tsai. “They’re basically spending the same money that would get them an FDM printer from our competitor as they do on our SLA printer.”  An in-depth look at how 3DPI’s Mark Lee handled the machine can be found in our review here. 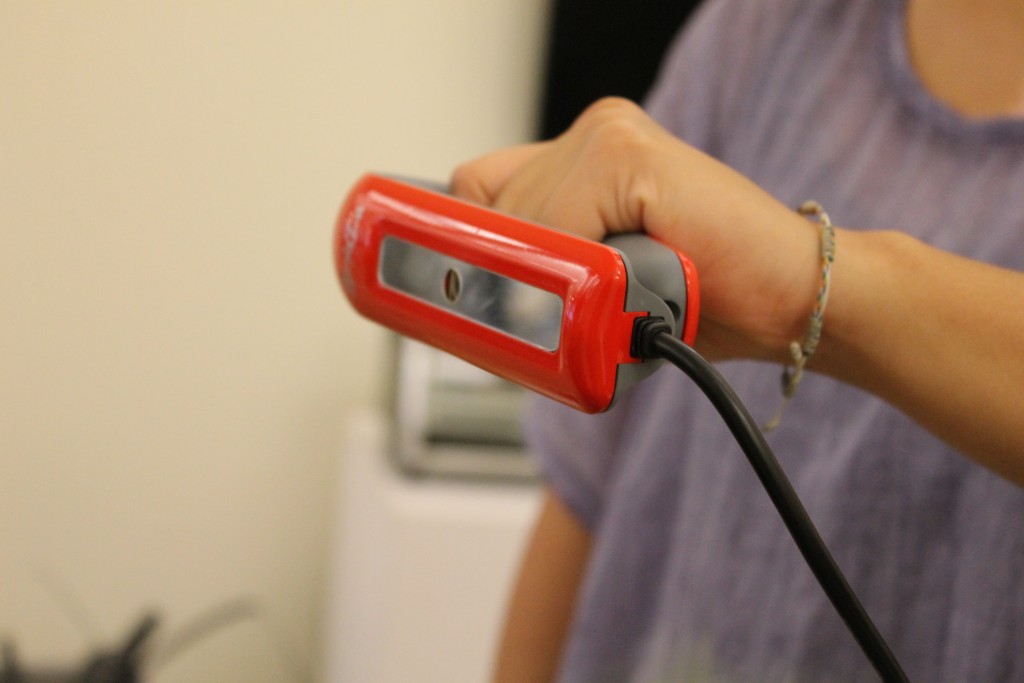 Other than the da Vinci Pro printer and the laser-printed objects displayed during the XYZprinting demo, I had the chance to get myself fully scanned with their new 3D scanner, which functions as both a handheld and desktop scanning device. The 3D scanner will be one of the most affordable and versatile products of its kind on the 3D technology market, priced at just $199 and capable of high-speed and finely-detailed monochromatic 3D scans of any sized or shaped object, directly into the company’s specialized software with Intel’s RealSense 3D sensor.

The team also unveiled the advanced remote controlled XYZrobot, which is able to do everything from walking to working out. This intriguing toy robot will come available fully assembled or in a DIY robotics kit, and will have 3D printable part files available online in order to modify or replace components. “[With] this humanoid robot here, for example, we provide 3D cosmetic parts so that people can not only assemble the robot themselves, but they can also customize it with 3D printed parts,” Tsai explained. Lastly, I got a little taste (literally) of their food printer, which has not been released to consumers just yet, but has been used to produce appetizing 3D prints from cookies to an entire pizza.

In what turned out to be an informative and hands-on demo, I could definitely see the shift that XYZprinting is making from the unexperienced consumer market to slightly more professionally capable machines. Their da Vinci Pro, 3D Scanner, and XYZrobot are the newest products to join the XYZprinting family, with further plans to release a food printer, bioprinter, and textile printer in the forthcoming year or two. “We will be demonstrating a lot of these new things at CES 2016,” said Tsai. “We will still be focusing on making regular 3D printers, but more geared towards higher-grade and commercial business uses.” CES 2016 will be XYZprinting’s platform to display many of these newly developed products to the public. If you happen to be around one of the CES event cities later this year/earlier next year, you, too, can get a hands-on experience of XYZprinting’s latest 3D printing, scanning, and robotic innovations.