The Gramohorn II[1] is a piece of technology from the 1870s updated for 2013. Free of wires or electronics, this 3D printed smartphone speaker reframes the analog technology of yesteryear as superior to its circuitry-inundated, woofer-loaded successors. The only catch is that you can only use it if you’ve got an HTC One (and some cash to spend). 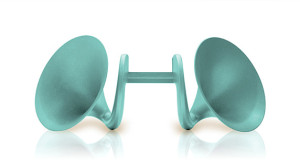 The Gramahorn II 3D printed acoustic speaker is a beautiful piece of functional art that you can attach to your HTC One, if you own one, as a means of projecting your .mp3s without the need for tangled cords or nearby outlets. The technology behind it is advertised in such a way as to suggest that the lack of electronic components enhances, rather than detracts from the device: “Sound emitted from the phone’s speakers is channelled and amplified, increasing volume by up to 50% without the need for power or cables. Acting as resonance chambers, lower frequencies and bass notes are also enhanced to produce deeper, fuller and ‘better’ music.” The Gramahorn II can be purchased in two customisable varieties: a plaster speaker that is spray-painted in a wide range of colours or a steel sintered version available in a silver, gold or bronze finish.  According to HTC, the plaster option is limited to a run of 100 pieces, while there will only ever be 10 copies of the metal Gramahorn II in production. 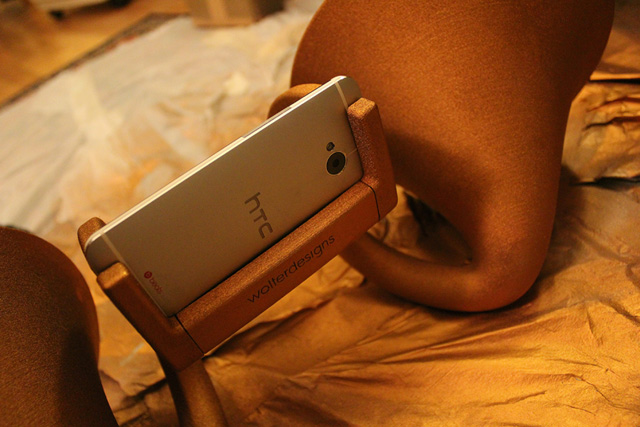 Developed by Chelsea College of Art & Design graduate, Justin Wolter, the analog device uses additive manufacturing to embrace uniqueness, by customising each 3D printed, metal speaker with a specific number (1-10) and destroying the original object file upon printing.  Simultaneously the project interrogates the philosophical and social ramifications of copying made possible by 3D printing — quite a sophisticated project to be sponsored by HTC. Wolter explains the implications of 3D printing on perceptions of uniqueness: 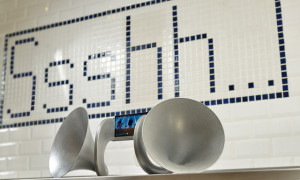 The wake of the industrial and digital revolutions have had a huge psychological impact on the way objects are perceived in society. The very ability to reproduce and disseminate ‘copies’, whether physical or digital, has destroyed the once unquestionable and absolute singularity of an object and along with it, the values ingrained within. With cultural theorists having once predicting art’s democratisation and class disassociation as a result of reproducibility, the truth is that today’s situation is far from this utopian-esque vision, having instead developed into a complex and sometimes paradoxical relationship between art, design and the commercial world.

Time-honoured concepts intrinsic to art, such as ‘uniqueness’, ‘originality’, ‘authenticity’ and ‘historical testimony’ start to buckle in today’s creative scene, with instances of artists acting as designers as well as designs acting as art. With many artists removing themselves from the fabrication process, it would seem that the importance and involvement of the original creator counts for very little in regards to an object’s ‘historical testimony’. Moreover, with so many designer products and labels capitalising on notions of ‘authenticity’ and ‘originality’, despite being knowingly mass-produced, it would also seem that the very values that were once intrinsic to an object’s singular physicality are now independent of the object itself and instead exists in society’s shared understanding and knowledge of this illusion.

The prices, depending on your view surrounding the value of art, are somewhat terrifying, with the plaster version running at £999 and the sintered metal piece going up to £4999.  But, then again, I’m sort of a Plebeian. I suppose that that’s the value of individuality as manufactured in a single, intricate piece.

If you don’t own an HTC One, can’t afford well-designed artwork with which to blast “What Does the Fox Say?”, or just don’t buy into Wolter’s take on art today, you might be able to find a printable speaker on Thingiverse for free.  Albeit, the sound of Norweigan parody-pop is much better resonating through plaster or metal than ABS.