GrabCAD, the online CAD repository and community, seems to be quite fond of challenging people to show off their skills in various ways with different types of (joint) ventures, whilst simultaneously also building a strong communal and interactive brand foundation for itself. From designing a 3D printer to future vehicles, GrabCAD has partnered up with several of the big names in 3D printing hardware when creating these competitions. However, even though MakerBot and Ultimaker are well known brands, the newest company to join forces with GrabCAD, General Electric, is in a different league in every way.

The topic of the newest challenge is a hot one, no matter how you look at it – the potential of applying 3D printing tech in the aerospace industry has been in the headlines alot recently, especially for its resource-saving abilities, considering both the operating companies and the environment. From the OEM perspective, the benefits of 3D printing are unambiguous – different parts and components can be designed and manufactured to be optimized both for weight and performance (and sometimes durability), which has rarely been the case with traditional manufacturing methods. GE, the conglomerate juggernaut, has been among the best known companies to publicly show interest in 3D printing in this sector, most recently with their efforts for jet engines. For this most recent challenge, GE and GrabCAD are crowdsourcing new ideas and concepts specifically for jet engine brackets. 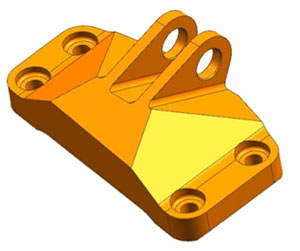 The loading brackets are needed to support the engines without losing their physical shape or other qualities, therefore the durability has been the number one feature of the design process of these parts to date. Other engine brackets naturally have the same requirements, which also offer a company like GE substantial weight (and money) saving potential, if additive manufacturing could be applied as stated above. Therefore, in order for GE to actually benefit from this particular competition, there are limits to what the entrants could and should produce. So if you’re already creating a novel futuristic bracket design in your head, be sure to apply some restrictions to it before creating the actual CAD file: the parts should be designed for a current jet engine and the spec list is a long and detailed one, which for the sake of you, the readers, is why it isn’t gone through here. Instead, for those interested it can be downloaded or viewed from this link.

The competition itself is divided into two phases. At the first stage, the jury, consisting of GE and GrabCAD experts will narrow down the designs that actually meet the (strict) requirements from the entrants, then put them through a set of simulations to map out their performance with the setting shown in the image below. 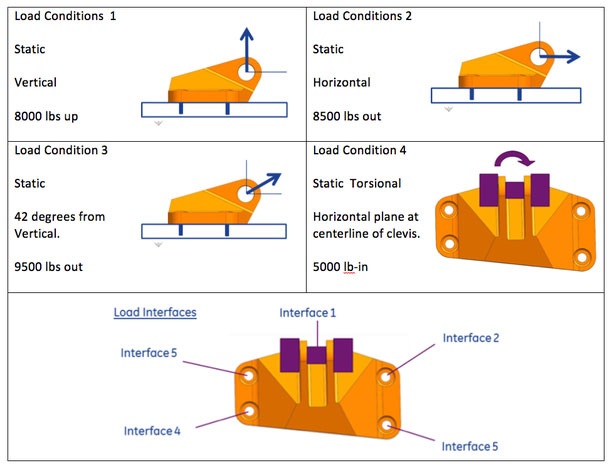 After this the panel chooses the ten designs which the judges deem show the most potential and perform the best under the test conditions. These finalists will each be awarded $1,000. After this, the second phase goes beyond virtual simulation with the top-ten finalists having their designs 3D printed and tested in real world scenarios (although with the wheels still on ground). The winner of the second phase will receive $7,000, in addition to the impressive reference in the respective designer’s CV.

Timing-wise the competition is already open, with the designs for the first phase needed to be submitted by July 26th at the latest. If you’re skilled enough to pass through the first phase, the second part of the challenge will be conducted from August 15th to November 15th, so we’ll be presenting the winners here on 3DPI before the end of the year. The full set of rules can be found here.