As the amount of available 3D printing materials continue to expand, wood-based filaments have become the apple of the Maker community’s eye. Including smartphone accessories and beyond, the mixture of wood into PLA produces objects that look (and sometimes even smell) reminiscent of the Birch tree in your childhood backyard. Personally, I’ve only experimented with eSUN wood filament, thus far, but I can’t help but get myself caught up in the ‘woodfill’ hype as well, especially upon recently discovering the variety that one particular filament company has to offer.

While some filament companies have been releasing their own versions of wood-based filament here and there, Netherlands-based Formfutura has been steadily producing a whole line of them. Last year, the filament company released three variants of their EasyWood filament, in Coconut, Olive, and Ebony varieties. Due to the apparent success of these three wood-based filaments, Formfutura has just released four new variants of wood-based PLA to the EasyWood line, bringing their total selection to seven different wood types. 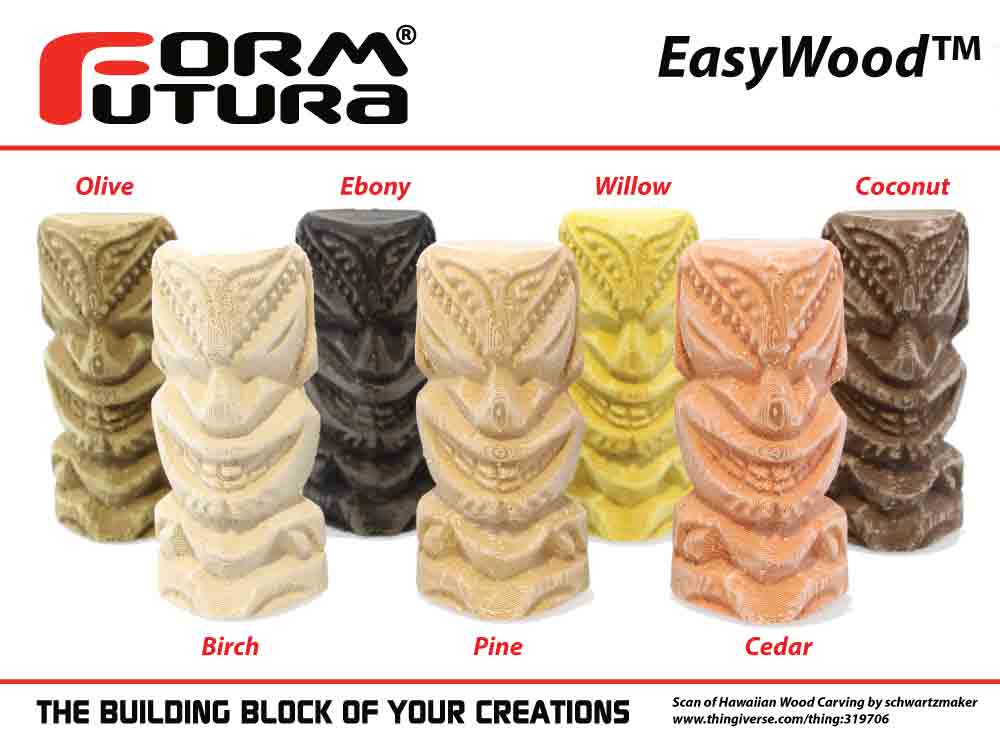 These four new variants are EasyWood Birch, EasyWood Pine, EasyWood Cedar, and EasyWood Willow, each of them are composed in their own unique blend of wood. They use a mixture of 40% ground wood particles and print-friendly binding polymers, resulting in wood-based filament that Formfutura feels is the real deal. They have engineered their EasyWood filament line to be modifiable in tint and color through temperature variation, even allowing users to create a tree ring effect within your prints. The EasyWood filaments are also receptive to a light sanding, which is recommended for an even more realistic wood finish.

The EasyWood filaments are available in both 2.85mm and 1.75mm, each of the seven blends cost €32,95 (about $36.30 USD). Formfutura has a whole slew of different 3D printing materials, but they seem to be set on riding upon the wood-based filament wave, offering more variants than any other filament company on the 3D printing material market. Their expansion of the EasyWood filament line proves, if anything, that wood-based filaments are in demand, and just may shake out to be more than a filament trend.