According to market research firm Gartner, 3D printing in the medical sector is climbing towards a peak of hypeability and nothing could be more hype-worthy than the regeneration of nerves after an injury.  A team of researchers from the University of Minnesota, Virginia Tech, University of Maryland, Princeton University, and Johns Hopkins University have created a first-of-its-kind 3D printed guide that helps restore sensory and motor functions to damaged nerves, a affliction suffered by more than 200,000 people worldwide due to disease and injury.

The Mayo Clinic suggests that, due to the complexity of nerve regeneration, nerve damage can be permanent; however, according to a study published in the journal of Advanced Functional Materials, there may be a 3D printed solution.  The multidisciplinary team was able to 3D print custom silicone guides infused with biochemical cues that proved to effectively regrow nerve tissue in lab rats.  To create the guide, the team first 3D scanned a rat’s sciatic nerve, resulting in a 3D model with which to create a guide specifically for the rat. 3D printed on a custom-built machine, the silicone guide was saturated with chemical cues (colored red and green in the video above) to trigger motor and sensory nerve growth.  After the guide was surgically implanted into the cut ends of the rat’s nerve, the rat was able to regain its normal walking ability just 10 to 12 weeks later. 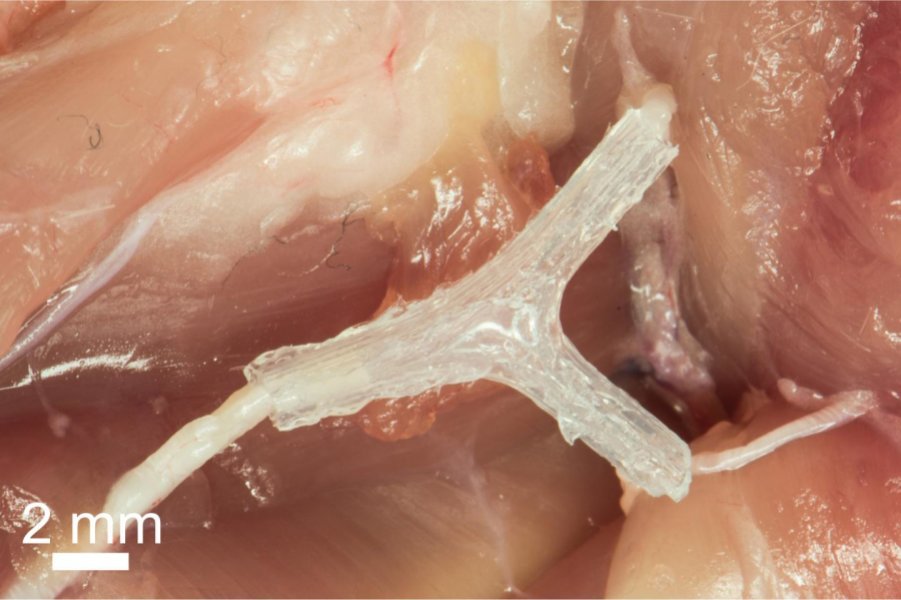 While nerve regeneration has been demonstrated with straight-line nerves, this was the first time that more complicated shape was regrown.  With an accurate 3D scan and the subsequent 3D printed guide, the sciatic nerve’s Y-shape was regrown over the course of just a few months.  Michael McAlpine, lead researcher and mechanical engineering professor at the University of Minnesota, said of the study, “This represents an important proof of concept of the 3D printing of custom nerve guides for the regeneration of complex nerve injuries. Someday we hope that we could have a 3D scanner and printer right at the hospital to create custom nerve guides right on site to restore nerve function.”

To bring this technology to humans, McAlpine suggests an entire library of scanned nerves from individuals, living and deceased, could be created to create guides for patients.  The professor says, “The exciting next step would be to implant these guides in humans rather than rats.” When there will be a Thingiverse, Youmagine, or MyMiniFactory for 3D printable nerves remains to be seen, but, when it arrives, you may never have to hear your uncle complain about his sciatica ever again.