The world is a complex system of biodiversity, individual components interacting, giving and taking from one another. As we begin to truly understand this concept, we can begin to harness the power of living in symbiosis with our environment. Take seaweed, for instance. Researchers at the University of Wollongong (UOW) in Australia have been exploring the use of seaweed in 3D printed medical implants.

Dr. Pia Winberg of UOW’s Shoalhaven Marine & Freshwater Centre has been looking into the industrial applications of seaweed through her spin-off company, Venus Shell Systems Pty Ltd. One such application is the use of seaweed gels in tissue engineering and medical implants, with the seaweed extract simultaneously acting as a support structure and defending against bacteria, viruses and fungi. Winberg explains: “These gels are highly cell compatible and even stimulate the health and development of human stem cells, so in the instance of looking for new polymer materials for medical implants, seaweeds are a key candidate for the source of such materials.” 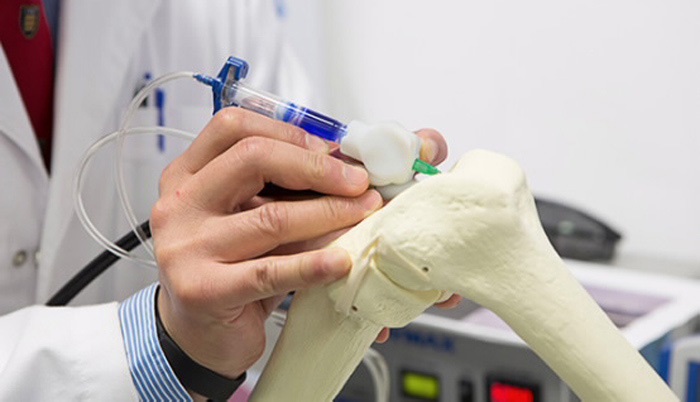 Dr. Winberg’s team has begun collaborating with the lead division of UOW’s Australian Research Council Centre of Excellence for Electromaterials Science (ACES), the Intelligent Polymer Research Institute (IPRI), to employ the use of seaweed in a range of medical projects, including the FFF BioPen that we covered in December. As you might recall, the pen extrudes biomaterial at precise locations for the purpose of tissue regrowth. In order to extrude stem cells and growth factors for transplantation to an injury site, a protective outer material must surround the biomatter. In the case of the BioPen project, that material was an ulvan gel, extracted from seaweed.

Ulvans, Dr. Winberg hypothesized, may serve other medical purposes as well. For instance, the seaweed gel might be harnessed to inhibit sugar-releasing enzymes in the stomach to reduce metabolic and diabetic stress. It’s also possible that ulvans could act as an anticoagulant or for dermatological purposes to reduce skin tumours and improve skin elasticity. Winberg also suggests that antiviral, anti-inflammatory, and antibacterial medicines could rely on the seaweed extract in the not so distant future.

Through her collaboration with IPRI, Dr. Winberg and her colleagues will research the potential for the compatibility of seaweed cells in 3D printed implants, having seen its efficacy in prior tissue regeneration projects. The director of IPRI, Professor Gordon Wallace, argued that the “ability to tailor the source of biopolymer supply enables highly effective integration into emerging fabrication techniques such as 3D printing and fibre spinning.”

Because such byproducts result from the farming of plant life, Winberg points out the positive impact seaweed cultivation has on the environment. The plant, in digesting carbon and nitrogen from the ocean, produces oxygen that may reduce the acidity of the ocean. According to Dr. Winberg: “Our seaweed production systems actually strip concentrated CO2 directly from industrial sources – thus increasing the rate of biological carbon uptake and shifting carbon to the biosphere instead of the atmosphere. We will also take waste streams of nitrogen from clean industry sources, which would otherwise be lost in the catchment.”

And, perhaps recognizing the need for a symbiotic relationship with their surroundings, the doctor elaborates, “As with all systems introduced by people, you need to have good local management practices. For example we use local species not introduced ones. We need to design systems that look after and improve the local environment. That is the opportunity that seaweed industries in Australia can provide.” Now, let’s all go to the beach and get our symbiosis on!