The 3D printing industry is full of confrontation and opposites. Depending on the stance, it can either be considered environmentally sustainable or a waste of limited natural resources; a true democratization of design or an easy way to achieve cheap knock-offs; a world full of interesting content or filled with PLA junk destined for landfill, but regardless of your position or perspective on these issues, the IP rights issue — always lurking — is the one that seems to get the blood pumping the most. FabSecure is a serious take on this matter with the intent to create a secure streaming-based cloud service with a licensing model, where the rights of the designers/IP holders would be fully protected and guaranteed.

Fabulonia is the company behind this solution, and is a name that might ring a bell, as we covered the company’s original concept, showcased at the Barcelona Mobile World Congress earlier this year here.

What FabSecure basically does is take Fabulonia’s previously introduced inclusive, copyright-secure journey of a 3D model to the next level and up a physical notch. The initial model raised some concerns due to its correlation to the painful and seemingly never-ending bumpy paradigm shift the music industry has been trying to cope with – digitalization and the related war of rights and dollars. That was and is a dilemma that the recording industry (and the artists) still haven’t really been able to solve. But do the same mistakes necessarily have to be made again with 3D printing or could the solution provided by FabSecure – labelled by some as the Spotify for 3D designs (1) – prevent an evolution similar to the music industry?

Here’s an illustration of how it actually works: 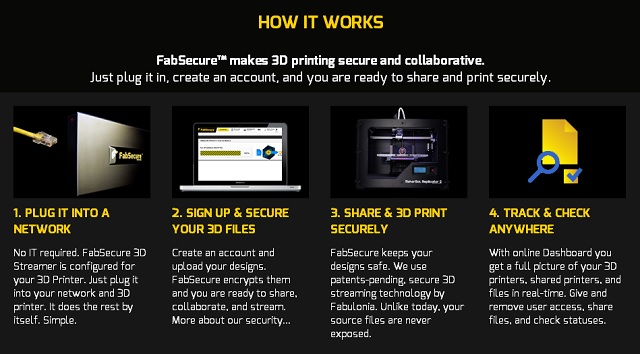 The Spotify reference isn’t actually that far off in some ways – the basic idea of FabSecure is to provide a secure platform for companies – or individual aspiring designers – who either don’t have the resources or the will to create a solution to store and distribute 3D designs via their own channels. Distribution in this case is done by streaming as opposed to ‘full’ downloading, which is handled by FabSecure’s patent-pending solution.

The CEO of Fabulonia, Kimmo Isbjörnssund, believes that this service is the solution for any organization willing to allocate their resources but without the worry about technical aspects of 3D model storing and sharing: ”Fabulonia provides the whole 3D printing business solution for storing, licensing, distributing and selling 3D designs online and streaming them to a 3D printer. It turns 3D originals into new revenue streams, using FabSecure streaming servers, and embedded 3D printer security software. Companies can even create their own 3D printers with embedded copyright security. What’s great about this is that it provides alternatives, not restrictions. FabSecure technology preserves the creative freedom of consumers, as well as how they use their printers. It provides them with an easy and legal way to purchase and make originals. Old, hacked, and unpopular DRM schemes are no longer the only way to monetize your copyrighted content.” 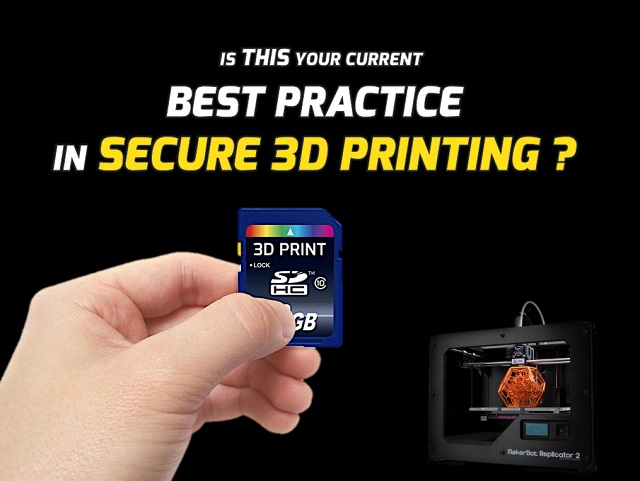 As security is obviously a fundamental aspect of why the service even exists in the first place, the FabSecure system includes several steps to ensure that this product promise is also delivered to the users. At its core, the basic patent-pending securing method mentioned earlier is called Multidivision Encryption, which is implemented into the service to guarantee that the files can not be accessed by rights holders. Furthermore, the connection between the user (uploader or streamer) and the servers located in Germany is only open during the uploading/encrypted streaming process as opposed to an always active open solution.

Fabulonia has apparently done its homework — market research and user studies on the target group issue with FabSecure — with their potential clientele being offered three different solutions: a starter package with no monthly fees and the basic set-up, pro with more cloud space and control for a monthly fee and the enterprise targeted for companies seriously committed to the cause.

The streaming itself requires an external device, simple enough! However, and it’s a big one, this device is specifically listed as being compatible with Makerbot 3D printer platforms, so that’s the Replicator 2 and 2X.  I haven’t got access to the most recent market share figures, but focusing on Replicator 2s an 2Xs definitely seems more like a strategical (joint) marketing effort rather than something based on quantitative potential to me – though some config magic on other RepRap-derivatives or other 3D printers could probably clear the compatibility issues – if there’s a will, there’s a maker way.

But does it all sound a bit confusing? At least to me it does and I’ll explain why: The FabSecure service can’t really be separated and taken out of the wider context – that of the company Fabulonia themselves. To me it seems like they have created the aforementioned patent-pending system for secure storing and streaming of (3D) files, which is at the core of their whole offering. But from there it gets a bit blurry and it looks a bit like Fabulonia is currently mainly experimenting and probing the evolving 3DP market to map out where they could actually go with their developing portfolio, using the obviously value-adding secure streaming aspect as their core angle. Based on their public material, there are several options and routes in which way they could go and focus on, the following spring to my mind:

1)     offering a secure solution for a company to store their own designs such as prototypes and print them out at their office with their 3D printer – internally (secured from internal IP threats such as USB sticks as well as external digital security breaches, targeting large companies)

3)     operating a market platform where 3D models could be bought and printed via an external professional 3DP partner with professional equipment (e.g. Shapeways), focus again on the security

4)     e-commerce platform where buyers would directly purchase the objects in physical form from the sellers with a 3D printer (SME´s, freelancers etc.), with Fabulonia providing the secure commercial platform, maintaining and streaming of the files

5)     selling their cloud/streaming hardware and platform for resellers i.e. devices and services – type of company model

The options for the company are many, but one thing is certain if the encryption tech itself is as waterproof as Fabulonia states,  there shouldn’t be any problems regarding monetizing issues. However, unfortunately there’s no such thing as 100% secure if a physical or digital object is stored somewhere. Therefore the current reality will probably continue in the future, probably not changing much for better or worse. If something succeeds, it will be copied in some way, scanned and reproduced, digital files stolen etc. – jealousy and selfishness are two natural resources that are not diminishing on this earth and which are not protected by intellectual rights.

What do you readers think about Fabulonia’s take on the issue of securing companies’/designers’ IP rights, could this be at least a starting point for something beneficial to everyone involved in the 3DP world? I remain to be convinced that this is an all-embracing solution, but I do think studying IP law will provide aspiring lawyers with a lucrative job in the future, although resulting in few answers.