On Saturday, July 13, Fabneo launched as a high-end boutique for 3D-printed items. With a heavy emphasis on design, the online marketplace currently sells 3D printed jewellery, lighting, fashion and other objects created by well-known 3D printing artists, Fabneo plans to release their own collections in the future.

The site launched with such 3D printing designers as Nervous System, Dario Scapitta Design, Joshua Harker and unellenu who have already made splashes in the additive manufacturing world with an array of complex, beautiful and often desirable objects – all of which have been featured on 3DPI at some point. unellenu, for instance, has released a line of fractal jewellery. 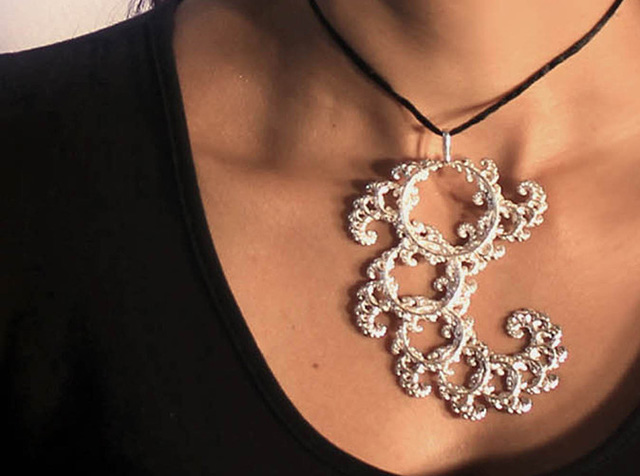 Joshua Harker, is famous for his 3D-printed skull collection, Crania Anatomica Filigre, which raised over $77k on Kickstarter.

Dario Scapitta is another jewellery designer that produces sleek necklaces, bracelets and collars. 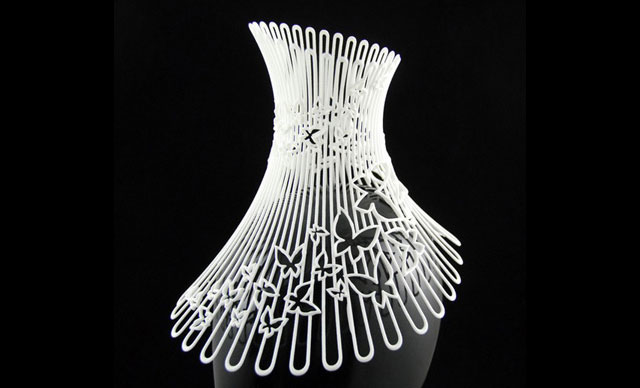 And Nervous System is a “generative design studio” that creates jewellery, art and home goods using mathematical formulae based on principles found in nature. Here’s a video describing their work in a bit more detail:

You might think of Fabneo as sort of the opposite of Shapeways. Instead of a place where anyone can go to sell their 3D-printed wares, it is a highly curated boutique for goods that are keenly designed and may be a bit more expensive. As the company’s founder, Ralph Schechterle, puts it:

Shapeways has a much broader focus covering everything from very cheap plastic toys to very expensive and large models like lamps or silver jewellery. We focus just on high quality designs within specific categories like jewellery, lighting, fashion, etc. We want to provide a curated shopping experience, offering just the best designs from the most talented and well-known 3D designers and artists around the globe. And all of our products are in the middle to higher price category.

Shapeways has a different target group focusing mostly on people in the tech/maker/DIY community; we target mainly design-savvy people. We are also more focused on our target group, because the people who will buy cheap DIY stuff for $5 probably won’t buy a silver pendant for $400. Our marketing will focus on people that want to buy something that’s a great designed product; they do not necessarily know much about 3D printing. In this way we think we can increase the awareness of 3D printing and reach a broader audience compared with other 3D printing marketplaces.

I think the most in common we do have with Freedom of Creation (now Freshfiber) and mgx by Materialise. However, I don’t see them as direct competitors, we may work with them together in the future and have some of their products on our site as well.

Ralph also gave me a brief description of his background and the background of Fabneo as a whole, saying:

I studied Business, Economics and Chinese culture in Hamburg and was long interested in entrepreneurship. I did a few smaller projects and now Fabneo is my first real company. I’m working with two co-founders, who are experienced entrepreneurs in Berlin. Their backgrounds are in computer science and design, so we basically have every needed skill “in-house”.

The boutique will begin with these designers, but plans on selling goods by other well-know 3D printing artists, hopefully, including a number of the ones listed on their Facebook page. They also plan on releasing their own designs, soon, as Ralph explains:

We will have exclusive collections in the near future that you will not find anywhere else. However we will start with collections of designers that are relatively well-known on the 3D printing scene and have already existing products. We will be a design studio (like Nervous System) but sell products from many other designers/design studios and artists as well.

So, if you’re selling your fashion forward concepts on Shapeways, remember to look your best! There may be a scout in your midst, perusing your goods to sell at his 3D-printing boutique.