The 3D printing space race is heating up, both in space and back here on Earth.  The US has sent a 3D printer to the International Space Station, with Europe and China proposing similar plans, but, space agencies across the globe are also working to improve their manufacturing equipment Earthside.  NASA’s Jet Propulsion Laboratory is already applying advanced 3D printing technology to develop multimaterial metallic components and, today, Trinity College Dublin has just received a big fat check from the European Space Agency to do the same with a new additive manufacturing process.  According to The Irish Times, Trinity received a €500,000 award to develop a new cold spraying technology for 3D printing metal components.

The new cold spraying technique is capable of 3D printing complex metal parts at room temperature. Without the need for heat to bond layers together, metal parts be printed without heat-based distortion and damage. In addition to the ability to 3D print complex parts as single units, cold spraying would make it easier to meld metals with different properties, similar to processes achieved by NASA’s Jet Propulsion Laboratory. Project lead Professor Rocco Lupoi, explains, “One part of a component may have one characteristic while another part of the same component has another. You can make any shape and you can mix materials in it and can make it any way you want.”

Lupoi adds that cold spray 3D printing doesn’t pollute or use toxic materials.  Instead, helium gas carries metallic particles at 2,462 km/h, twice the speed of sound.  The professor elaborates, “Engineering components usually start with a large piece of metal and this is reduced to the size and shape you need. Cold spray works like a painting machine, applying layer after layer to build up a shape, but done in a matter of seconds… You accelerate the gases to supersonic velocity and if you inject particles into the gas they will also reach supersonic speeds. The particles are moving fast enough to penetrate into the surface and bond in a quick way so you can build up say five millimetres of material in a mater of seconds, 1,000 times faster than other techniques.” 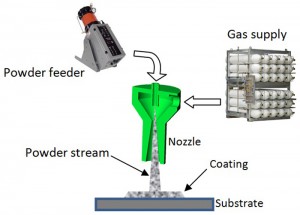 Though the technology has actually been around for the past decade or so, to create metallic coatings, it has typically been too expensive to 3D print complete objects, due to the price of helium.  Without the high spray speed allowed by helium, metallic layers can’t bond together, Lupoi explains, “If you want very high speeds you need helium because it is a very light gas. But the cost of helium is very dear so while the process is relatively simple to do it can be very expensive as well.”

On top of the cost, cold spraying as  3D printing technology is still in its infancy and, so, lacks the precision needed for the high-standard space industry.  He continues, “The technique allows you to make 3D metal parts but a complex one might cost €1 million. The concepts being brought forth in this project will specifically target these technological bottlenecks.”

To bring down the cost and increase the quality of cold spraying, Prof. Lupoi will work alongside other Trinity professors, as well as ESA staff.  The professor concludes, “It is a challenging project but there is a detailed technical plan approved by ESA that will address all of these issues in a four-year period.”