I spent an informative 24 hours at Develop3DLive 2013 – the very successful second edition of the product design and development event held at the Warwick Arts Centre hosted by the X3D Media team — and hospitable they all were too. I didn’t sleep a great deal in that 24 hour time frame but I did learn a lot — both in the formal presentations, of which there were (too?) many across the day, and in the informal networking opportunities afforded to delegates, sponsors, speakers and exhibitors, particularly on Monday evening at the bar.

In terms of the conference sessions the D3D team had brought together a phenomenal line up of speakers running in parallel across four streams covering an array of topics and issues — whatever your angle within product design, engineering and manufacturing, you were covered. Highlights for me were found in the well-represented 3D printing streams and keynotes. Obviously!

Ping Fu, in her now established role of Chief Strategy Officer for 3D Systems, kicked off the whole event (without competition) looking at Digital Reality. Ping, who has a well-documented penchant for 3D printed shoes and usually sports at least one pair of them at events like this, had ditched them this time around in favour of a 3D printed cream shawl that she wore to great effect as she delivered her talk. She covered all the bases, and stressed how 3D printing is making significant impact across key markets in industry as well as within the maker community. Two notable slides really stood out – the one denoting Invisalign, the dental brace company that is producing 64,000 custom products per day on 3D printers and the custom foosball table. There was also a focus on the developments around being able to capture large 3D data to preserve historical artefacts for the future in the digital world. Mount Rushmore for example. Geomagic is the solution she presented here. Ping rounded up by stressing, and stressing again that “Innovation is imagination applied.”

Following the first keynote session the conference split into its four streams and I headed off, with many, many others to room 4 for the 3D printing session. It was over-subscribed with standing room only as the first presentation, from Develop3D’s Editor-in-Chief, Al Dean got underway. Over the years Al has made his feelings on 3D printing quite clear, he does not suffer fools gladly. But in the last 12 months, he’s put his money where his mouth is and has got hands-on with the technology. Delegates got some great insight into Al’s shed, the home of his UP 3D printer, and entry level system, where he has been printing out “endless streams of tat” as he called it. Following a request from his dad, though, Al became fascinated with the idea of a ‘3D photocopier’ and has being trying out basic 3D scanning and 3D printing, with moderate success — and plenty of burnt fingers. As was expected, by me at least, this was a hype-busting presentation but he closed with a bit of an anomaly that kind of sums up where we are with 3D printing today: 3D printing needs to make sense for your business, but it is fun to try it, even if it doesn’t!

In fact, ‘hype-busting’ was the tone of the entire session, but it was all done very well.

Phil Reeves, a vastly experienced and well-connected individual in the 3D printing world, gave an interestingly titled presentation called “Jam to-morrow — The realities of 3D printing today.” Asking if the hype around 3D printing was justified. He pretty much shouted down the much-vaunted claims that 3D printing is “bigger than the internet” and the other gem “you can print anything.” However, based on in-depth research and some mathematics that was well beyond me, he did point to a time in a decade or two when these claims could be much closer to the truth. Phil’s work as the lead at the 3D printing consultancy firm Econolyst, is taking him and his team far, wide and deep into research for all manner of global companies looking at the potential of 3D printing. Phil’s core message was that the world is changing and it is changing fast — the future of 3D printing is fundamentally aligned with these changes and you ignore it now at your peril.

The session was rounded up by a presentation from Lisa Harouni – it was really nice to see Lisa back on the 3DP advocacy circuit. She has had her head down in recent months, together with the Digital Forming team, as they have brought the UCODO platform to commercialization. I caught up with her briefly, and it was great to see that none of her passion for the tech has been diluted.

I also managed to catch great presentations by Jurgen Laudus of Materialise, Carl Bass of Autodesk and Gian Paolo Bassi of Solidworks. Much to my chagrin I missed Tom Lawton, Gustavo Fontana & Brad Peebler in the name of 3D printing. But, I look forward to the videos of the presentations going live online so that I can play catch up on the content, having been regaled as to their worthiness to do so. And so my only request to the Develop3D team is that they consider 2 streams over 2 days for 2014 instead of 4 streams over 1 day!

It wasn’t just the conference that had grown significantly from last year, Develop3D Live also presented visitors with a bigger exhibition. 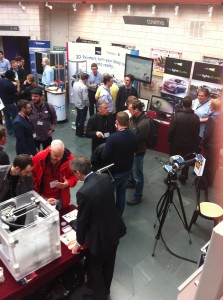 A dominant proportion of exhibitors were demonstrating software but there was a fair share of 3D printers on site. What I did notice in particular was that 3D Systems and Voxeljet were the only OEMs there, other 3DP companies were represented by resellers: ES Tech was there with some lovely parts printed on the Concept Laser systems, the jewellery piece below was designed by Willow Rolfe. 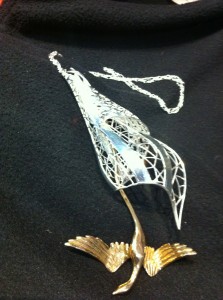 Two 3D Systems resellers were also present – EMCO (with a Zprinter) and Concurrent Design Group (not to be confused with either Concurrent Engineering or Concurrent Systems) with a CubeX and Cube. ITEC 3D covered Mcor and then Laser Lines, Tritech 3D and SYS Systems all represented Stratasys covering the Dimension, Fortus and Connex ranges with lots and lots of parts.

It was also really great to see the guys from Malcolm Nicholls with a wide range of 3D printed models, their speciality, many of them were demo parts and functional but some of them were really rather spectacular showing the intricacy that high end 3D printing is capable of producing. They reported a very good day with lots of interesting leads. 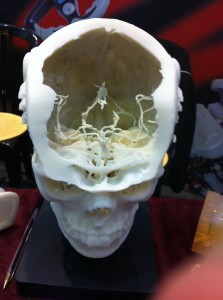 I was delighted to get the chance to catch up with others more informally. Richard Horne and Kevin Quigley were my seated companions during the 3D printing conference session. I also managed to grab time with Gustavo Fontana, who has some fascinating stuff going on (more of that in a subsequent post). Gossip was flowing plentifully along with the alcohol at the networking reception on Monday night. Probably best I don’t go into that here but I laughed a lot.

In all, a great day of information gathering and networking and I have to say that the whole event had a really special buzz about it. Visitor numbers were high and everyone I spoke to through the day seemed to be taking away something new and that is really what events like this are all about.