The Brookhaven National Labs Office of Educational Programs (OEP) purchased three 3D printers last year, as news stories of various institutions adopting the emerging technology began to multiply. Hearing about museums like the Smithsonian acquiring them, Bernadette Uzzi, who supervises the kindergarten through to grade 12 educational programs at the Lab, was intrigued. “We wanted to remain on the cutting edge for our student programs, and 3D printers connect nicely to science at Brookhaven Lab. Schools are beginning to look at these printers for technology classes.” She added that engineering is a “core element of the Next Generation Science Standards, developed by the National Research Council in partnership with science and educational organizations.” 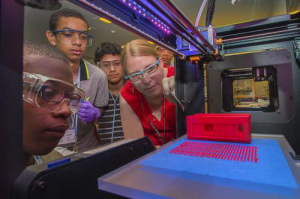 OEP had a maglev contest earlier this year, where students designed magnetically levitated cars, and 3D printed them to test out their designs. During another engineering program, Boy Scouts created neckerchief slides, key chains, tent stakes and sporks!  At Sci-Ed 2014, a professional development day for teachers, one workshop was dedicated to 3D printing.  Two common barriers to schools adopting 3D printers is expense and inexperience on the part of teachers and administrators. 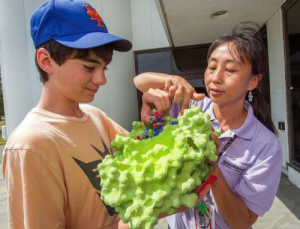 After the class, Uzzi quoted a satisfied teacher: “Getting to use the technology really made it seem more accessible and easy to incorporate into my classroom.” Alexei Soares, a biophysicist with NSLS-II, was invited to speak at the Sci-Ed workshop on 3D printing.  He brought some 3D printed trays he’d designed as part of a new technique for protein crystallization. “He explained how 3D printing enables him to conduct his research,” said Uzzi.

It’s also in high demand by scientists and engineers building beamlines for the National Synchrotron Light Source II (NSLS-II).  NSLS-II will enable the study of material properties and functions with nanoscale resolution and exquisite sensitivity by providing world-leading capabilities for X-ray imaging and high-resolution energy analysis.

“They use it to test their ideas before committing to final designs,” said mechanical designer Leo Reffi, who manages all of the print jobs at Brookhaven.

Reffi, who joined the Lab in 2008 with design experience on 3D printers, said, “After getting a few jobs printed on the outside and evaluating our needs for about a year, the design group acquired the printer in June 2012. Now it’s pretty much running all the time.” In between print jobs, he provides design support for NSLS-II beamlines IXS and CHX.

Now, everyone around the lab uses them, highlighting the versatility of the printers to provide unique and useful solutions based on a person’s previous experience and field of expertise.  Instrumentation Division uses them for work on the Large Synoptic Survey Telescope and Central Fabrication Services has added one to their making arsenal.

On the Lab’s industrial printer, using professional software, Reffi makes fixtures, parts used as place holders, large-scale parts built in sections that have to be assembled, and various R&D components.

When he gets a job, it often comes in the form of a quick sketch. His job is to clarify by asking questions: Is the piece heavy? Is it solid? How is it going to be used? Is it just for demonstration? Is it part of a longer R&D project? Also, the printer’s working envelope is 8″ x 8″ x 12″, so when Reffi needs to make something larger, he has to do it in pieces and create a design solution that doesn’t sacrifice the structural integrity of the project.

“Some jobs are quick and easy. Some are not. It all depends on the project,” said Reffi. I always give my input. If I can save someone time and money on a job, that’s good.”