As 3D printing tries to make its way into mainstream manufacturing, there are still some kinks to be worked out.  For aerospace companies, like Boeing, 3D printed parts need to meet a strict set of requirements before they can be incorporated into the death-defying world of air travel.  The process of building an object up layer by layer in additive manufacturing leaves room for structural errors, as not all layers will have the same strength, stiffness, and all-around structural properties.  When it comes to laser sintering nylon, one might see microscopic divots and craters spread throughout different layers.

One way to try to get around this problem, in the case of laser-sintered nylon, is by reinforcing the material being printed with something like carbon fiber or fiber glass.  And, though this may add a stronger element to the nylon that makes up the overall part, it doesn’t eliminate the overall problem of layer uniformity.  Each layer will have some strong carbon fiber, but it still won’t necessarily be the same as the layer above and below.  Another solution might be advanced sensors and software for continual feedback to the 3D printer to ensure that the laser operates just so to maintain uniformity, but all of those sensors, the programming, and the computer power cost a good deal and require a lot of research. 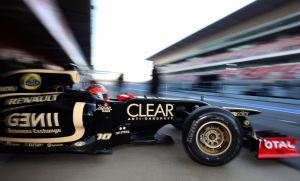 Boeing, in trying to tackle this conundrum, has teamed up with the Lotus F1 racing crew and, together, they’ve found a novel solution.  As the video below outlines, when it comes to constructing jumbo airplanes, Boeing doesn’t necessarily have the quick turn around skills to prototype parts and test them in the real world.  F1 racers, on the other hand, are ideal for such scenarios because they test their parts every week.

The Lotus F1 team set about 3D printing parts that were reinforced “in all directions”, with carbon fibers that were evenly distributed throughout a part.  Using recycled carbon fiber from Boeing’s production, the F1 team was able to spread carbon fiber through laser-sintered parts by 3D printing them with two sizes of particles, large and small.  The process, described in bureaucratic detail in a patent filed by Boeing, involves fusing the larger particles so that the smaller particles fall into open crevices, filling them in and fusing, to create a part with no microscopic holes of any kind.  It’s still difficult for me to wrap my head around the patent application (as happens when I read any patent application), but it sounds as though this process ensures that the carbon fibers are randomly distributed throughout the parts so that reinforcement is uniform throughout.

What’s most interesting about this project is not that an aerospace company and an automotive team worked together to create a mutually beneficial solution to a common problem, but that, instead of using sophisticated sensors and programs, they relied on material science.  In other words, even for high tech companies, new technology isn’t always the answer.  Sometimes you’ve just got to work with the material that you’ve got.