ArchDaily, a blog devoted to architecture news, has stepped up to endorse additive manufacturing as a technology with the potential to change the shape of architecture in the 21st Century. To spread the good word about 3D printing, they teamed up  with Gigabot, the 2 ft3 mega printer, and Sketchfab, a free online service for embedding and sharing 3D models, and announced a contest that aims to help increase the architectural presence in 3D model repositories.

In September, readers of the blog were invited to explore ArchDaily’s AD Classics, a series of posts profiling various landmark building designs, and create CAD files of their favourite pieces. They were then instructed to upload their files via Sketchfab so that they could be embedded on the ArchDaily site.  Submissions are now closed, but, from now until October 17th 11:59PM EST, anyone can vote for the People’s Choice Award. Additionally, ArchDaily and Gigabot will pick their own winner of the contest. Both winners will receive a 3D-printed version of their model printed on Gigabot’s giant platform.

The following model for the Lotus Temple, displayed via Sketchfab, was designed by someone named Elijah Wood:

The contest clearly demonstrates the use that large format 3D printers have for architects and designers, outside the actual construction of buildings. With the use of such a machine, it’s possible to quickly transform CAD models into physical models for use in presentation and planning. You know how, whenever you take a guided tour of some famous building, there’s a diorama located in the lobby?  Now, making such dioramas will be that much easier! 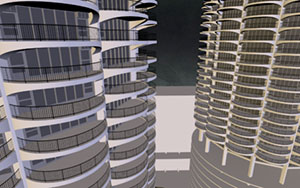 I’m a little disappointed because no one out there made a 3D model of Buckminster Fuller’s Dymaxion House or even anything by Frank Lloyd Wright (two of the few architects I know anything about).  I’ll have to vote for the Marina City model because it’s located in the city that raised me (the building itself is located in Chicago, not the model. The model exists in the ether of the internet).  Who did you end up voting for?