The idea of a mobile 3D printing service is not new, but when Amazon has recently filed a patent application for the practice, which, in fact, goes far beyond the concept of a van housing a 3D printer driving to a location and printing out an order, people pay attention.  The corporation has previously banked on the success of 3D printing by opening up the site to 3D printing retailers and giving them their own dedicated department.  Always hoping to improve its ability to deliver products as quickly as possible, often at the sake of its working conditions, the company wants to be a complete provider for 3D printing services, too, this time through third-party suppliers, including mobile printing trucks. 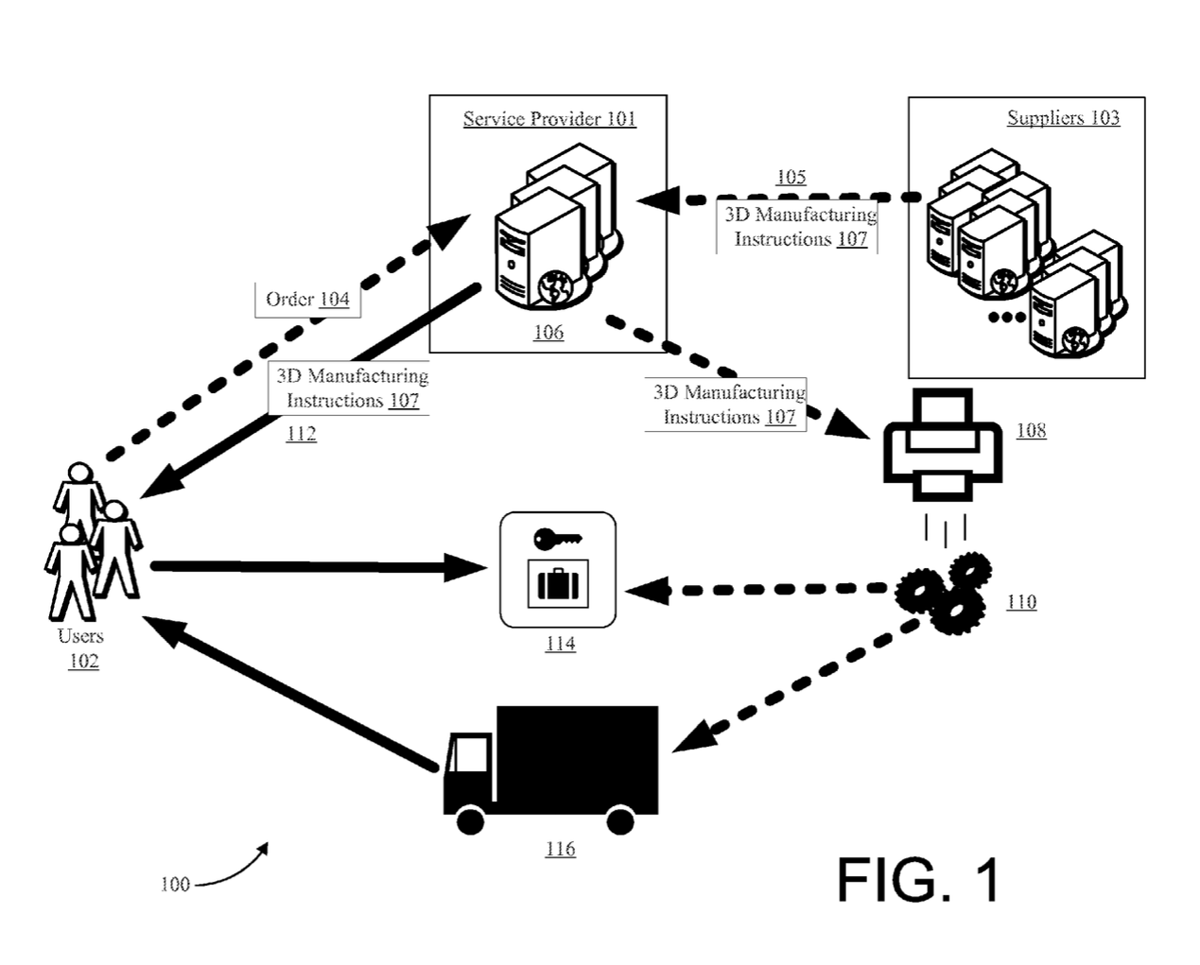 On February 19th, a patent application (.PDF) filed by the corporation was published, detailing the delivery of 3D printed items to Amazon customers. Though the patent does describe the ability for 3D printing service providers to print customer orders on a mobile truck, Amazon’s sights are set on a much broader business model, competing with existing 3D printing service providers, like Shapeways, Sculpteo, or i.materialise; 3D printing marketplaces, like MyMiniFactory or 3dagogo; and even distributed 3D printing networks, like 3D Hubs or makexyz.  One paragraph of the patent application reads (I’ve deleted all of the numerical annotations for easier readability):

In other words, Amazon is attempting to patent a method for purchasing a 3D printable or 3D printed item that can either be printed by a customer’s own printer (a 3D printable file, as sold on shops like MyMiniFactory or 3dagogo), or printed by the service provider and delivered through the mail, stored at a pick-up location, or printed on a truck en route to the customer’s location.

Recently, Virginia-based 3D printing service printapart3d (which has just launched a Kickstarter campaign) was able to sell its own digital wares on Amazon. The firm is now selling printable .stl files for utilitarian items like bolts, screws, nuts, washers, and fasteners on flash drives and memory cards. printapart3d suggests that Amazon will continue to make digital media available throughout the year, paving the way for their own “Retail Renderables”.  Amazon’s patent application reinforces printapart3d’s beliefs, describing a world in which the files themselves would be sold, along with the ability to 3D print them using a variety of 3D printing technologies.  An equally utilitarian hypothetical described in the applications places Amazon at the heart of a world in which service providers and original equipment manufacturers work together to produce replacement parts for customers, all through the e-retail giant (cleaned up for readability):

An illustrative example of the operation of the system depicted in FIG. 1 follows. A faucet handle breaks off while a person is cleaning up after dinner, making adjustment of the water pressure/temperature difficult. The user utilizes his or her smartphone to access an electronic marketplace network page (provided by the computer systems of a service provider in this example). The user locates the replacement faucet handle on the network page, and places an order for the faucet handle, requesting remote pick-up. Upon completing the order, the user departs for the pick-up location indicated by the website. Meanwhile, the computer systems retrieve a digital 3D model of the faucet handle from a database maintained by the original vendor of the faucet (i.e., interact with a supplier to obtain 3D manufacturing instructions). The computer systems then convert the 3D model into printing instructions for a 3D printer (i.e., the 3D manufacturing instructions for the 3D manufacturing apparatus). The printing instructions are used to produce the faucet handle as a MOD item by a 3D printer located at a storage facility while the user is en route. The MOD item is picked up by the user and immediately installed to replace the broken faucet handle, thereby quickly resolving the faucet issue.

As the world’s largest retailer, this may be an intimidating prospect for the aforementioned companies, though it’s possible that service providers like Shapeways will simply operate through Amazon.  For the rest of us, it may be a frightening prospect, given the e-giant’s previous track record of disrespect for its own employees.  Hopefully, another e-retailer will step up to compete with Amazon, so that more benevolent business practices can triumph.