Coming off of the heels of the North Carolina State’s multi-million dollar 3D printing lab, which made headlines by fabricating prostheses for animals, is another story about a US college helping wildlife with additive manufacturing. Only, Auburn University’s College of Veterinary Medicine in Alabama only needs a Makerbot to help our furry friends.

Thanks to the first technology grant from the college’s Information and Instructional Technology Committee, the Radiology Department was able to acquire a Makerbot and begin replicating.  According to Dr. Don Sorjonen, Professor Emeritus of Neurology and Neurosurgery, the machine was used to model a cervical transplant for a small dog, saying:

In this particular case, a 1.4 kilogram Yorkshire terrier had an instability of the first and second cervical vertebrae. The joint was unstable and not aligned properly. Because of this dog’s small size, we did not have the proper implants to repair her instability. With the physical model of this dog vertebrae produced by the 3D printer, we could accurately measure the cervical vertebrae and order special plates and screws suited for this dog’s repair. Being able to craft a surgical remedy before surgery that functioned in surgery was very beneficial. If we did not have the special-ordered plates and screws afforded by measuring the vertebrae from the 3D printer model, the surgical outcome was less likely to be successful.

In addition to the transplant prototype for the Yorkie, the college has also utilized the 3D printer for surgical prep and education by creating before and after prints for a complex eye fracture surgery performed on a horse. 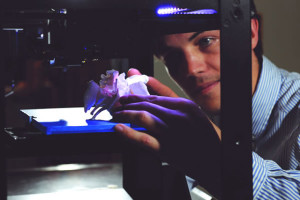 Thanks to a computer we were able to create a 3D model on a screen, but allowing this model to be printed gives us an excellent tool for communicating with our colleagues and clients. The 3D printer allows the surgeons to evaluate more approaches to solve a problem preoperatively and may help them in deciding which solution is optimal for the patient. By having a prototype in their hand, surgeons can narrow their choice of surgical implants ahead of time. As the model can be sterilized, they can even be used during surgery as quick reference.

The Director of Information and Instruction Technology, responsible for the grant, believes that, not only will the printer be utilized by the surgical department of the college, but could be used in other areas, as well.