While in Taiwan, I had the opportunity to see the headquarters of the biggest consumer 3D printer company in the world, XYZprinting.  Seeing the New Kinpo Group subsidiary first-hand gave me the opportunity to learn a great deal about how the XYZ brand was able to explode overnight (covered in a separate post), but I was also able to catch wind of some exciting news ahead of CES 2016.  Among the many products that XYZprinting has brought to CES this year are a new, sub-$300 3D printer, a desktop FDM machine capable of mixing colors, and a full-color, binder jet 3D printer. On top of that, this year’s show demonstrates that the Taiwanese brand is expanding well beyond the realm of 3D printing tech.

Today, at CES Unveiled’s pre-show event, XYZprinting showed off eight different 3D printer models, as well as new wearable devices, robotics, and more.  About the technology, CEO of XYZprinting and New Kinpo Group, Simon Shen, said, “XYZprinting has been assertive in breaking down the technology barriers in the consumer 3D printing market, by introducing easy-to-use devices that deliver innovative experiences to consumers at cost-effective prices. At this year’s CES, we are making an aggressive push in the B2B market, by introducing new products and devices to our product ecosystem within and beyond the 3D printing ideology, while continuing the successes we’ve experienced with our accessible 3D printers.” 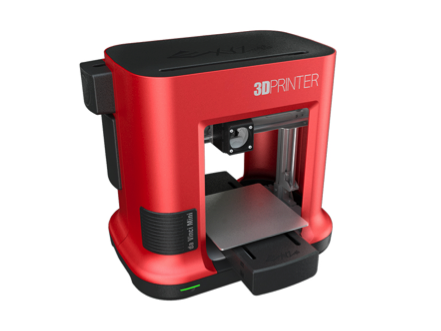 The new 3D printing products that the company will release in 2016 make it seem as though XYZprinting will, like last year, be the company to sell the largest number of consumer 3D printers this year, if only due to the price points alone. The new da Vinci Mini is even more affordable than the Jr. at $269, but has even greater functionality.  With the Jr.’s compact build volume of 5.9”x 5.9”x5.9″, the Mini is upgraded with Wi-Fi and USB ports, meaning that customers get even more for even less by purchasing the Mini.

XYZ has also expanded its machines’ capabilities.  The da Vinci Junior 1.0 3-in-1 will have 3D scanning, 3D printing, laser engraving, and Wi-Fi all in one single device and at a price of $549.  And auto-calibration ensures that the extruder and printbed achieve the correct distance for printing. The da Vinci Junior 2.0 Mix adds the ability to blend two colors through a single, dual-extruding nozzle to create prints that gradually change colors.  At $499, this machine rivals the color-mixing abilities of the yet unseen CubePro C from 3D Systems and the latest material mixing module for the ZMorph desktop fabricator. 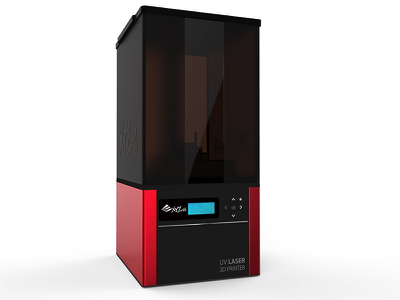 Also at CES, XYZprinting is showing off its Professional line of 3D printing systems, which includes the Nobel 1.0 Advanced (1.0 A), an upgrade to its previous stereolithography printer with improved resolution.  With a price of $1,699, the Nobel 1.0 A has X/Y-axis print resolution of 0.13mm and a Z-axis resolution up to 0.025mm. For advanced FDM users, the company has also brought along the da Vinci 1.0 Pro 3-in-1, which, in addition to Wi-Fi connectivity, features 3D scanning and an optional laser engraver add-on for engraving wood, leather, cardboard, and other materials. The $899 Pro is also open to non-proprietary filaments. 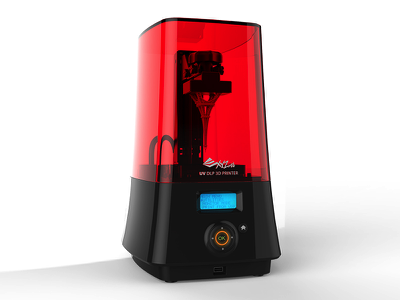 As interesting as the company’s other machines are, it’s their entrance into commercial systems that really intrigues me.  On display the company is introducing their first DLP machine, the Nobel DLP.  Priced at around $1,999, this is one of the brand’s most precise and fastest systems, capable of printing with an X/Y-axis resolution of 50 microns (0.05mm) and a layer thickness (Z-axis resolution) of up to 25 microns (0.025mm), one third the size of the average human hair. Available with the Nobel DLP are castable and standard resins. 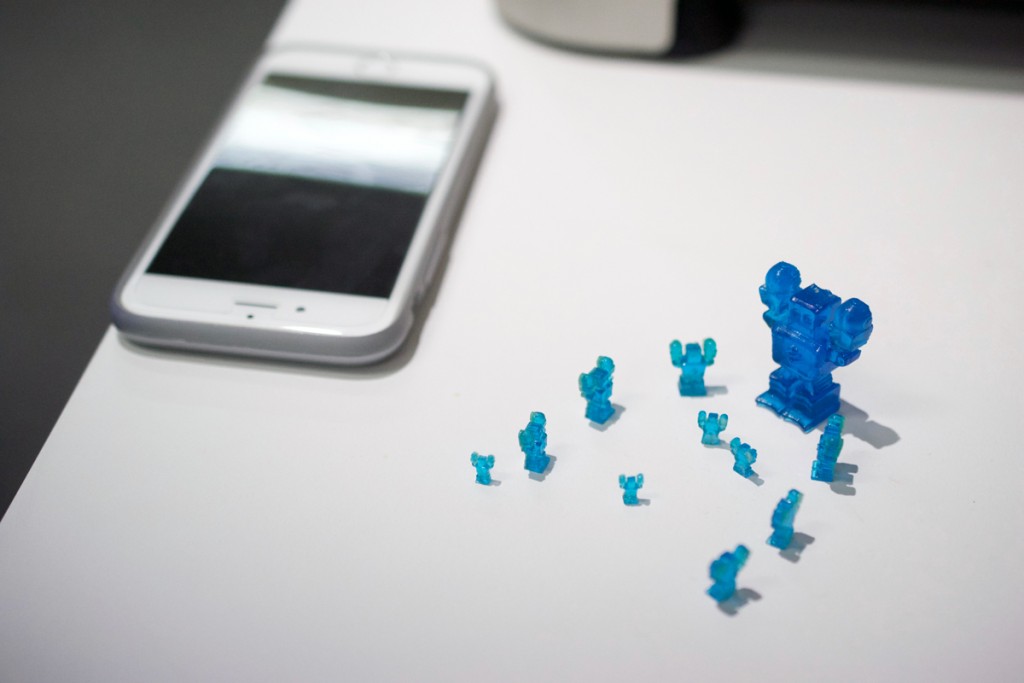 Getting further into the commercial space, XYZ is also displaying their 3D JET system, which uses inkjet technology to print photopolymer resins.  Available in 2017, the 3D JET can produce large objects with a build area of 300mm x 150mm at resolutions as high as 13 microns. While we await the types of resins that can be printed with the 3D JET, to know if it as robust as Objet’s multicolor, multimaterial technology, the company does say that it “supports high-hardness/rigidity and high-stress resin.” 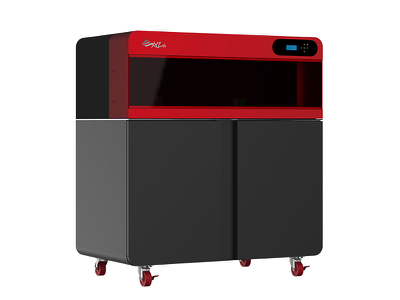 And, on top of all of these technologies, XYZprinting has also introduced a full-color binder jet 3D printer it calls the 3PP0A. A lot of the details regarding the 3PP0A are still under wraps, but the printer is meant to be an affordable binder jetting machine that can deliver full-color parts faster than other binder jetting technologies. With a build volume of 8.7” x 8.7”x 7.8”, resolution of 1600 x 1600 dpi, and 100 micron layer thickness, this new system is officially capable of 3D printing objects at 66 mm/hr, which is roughly three times the speed of the ProJet 60X.

To supplement these technologies, XYZprinting is also showcasing software, accessories, and more.  As their first 3D modeling app, the company is unveiling XYZmaker, a simple TinkerCAD-like software that will allow beginners, including students, to 3D model for 3D printing with ease.  The program will be released for Windows in Q1, 2016 and for Android and iOS in the second half of this year. This software complements the company’s online curriculum exchange program, XYZ STEAM, which includes discounted printers and online curricula for teachers and students. Additionally, the company has its $49 3D Pen and $299 Nobel Post Curing Machine on display. The curing machine is designed to be a quick-hardening and energy efficient UV chamber, with an LED lamp that cycles around printed objects every 30 seconds. 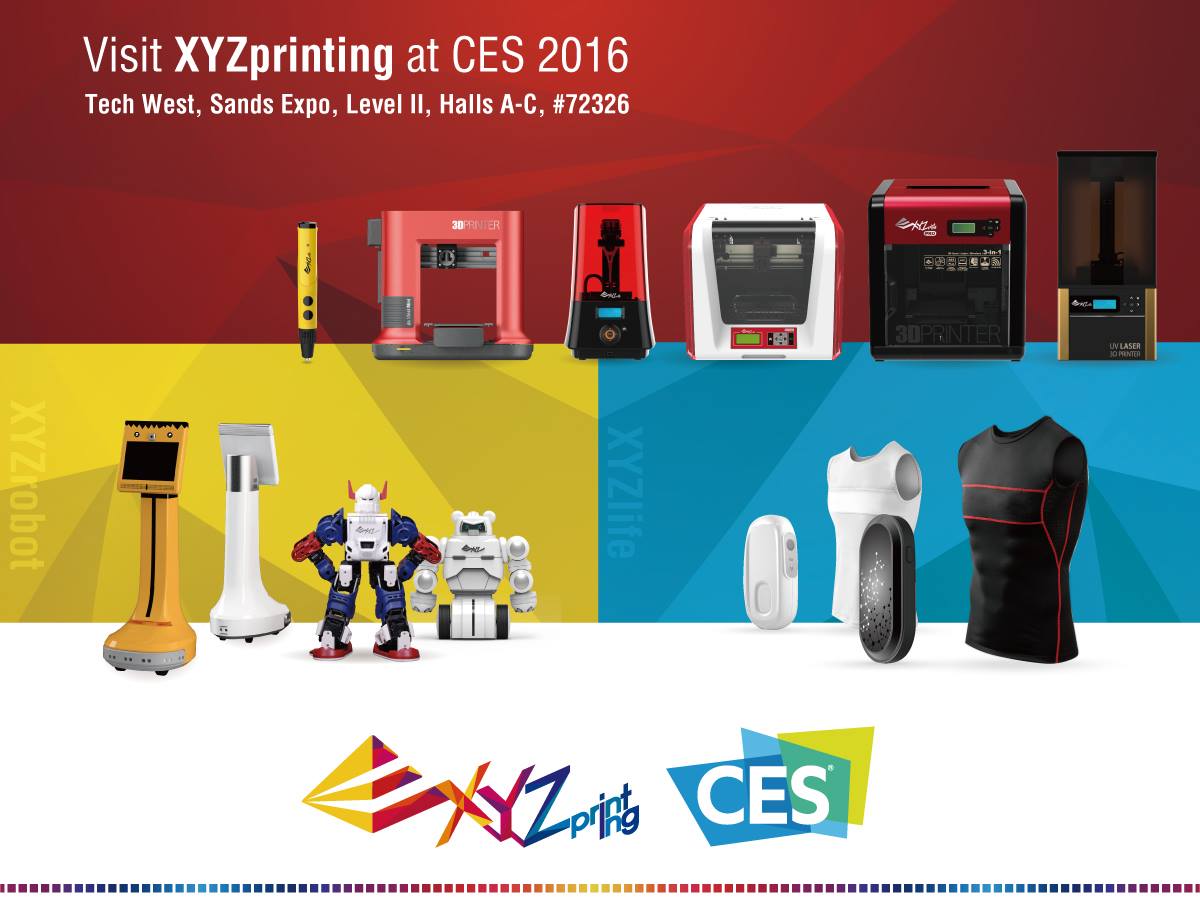 XYZprinting is also exhibiting their expansion beyond 3D printing with new products from their XYZlife and XYZrobot lines.  As a part of XYZlife, the BC1 is a continuous ECG monitor that can be put into consumer clothing or used as a wireless patch, providing heart rate data without being limited to time or place.  In terms of robotics, XYZ will unveil Bolide, its Humanoid Robot Line for DIY engineering learning, and their Smart Service Robot, which features auto-navigation, mapping, and surveillance. In addition to telepresence capabilities, this robot can guide people from phones or tablets using Android OS.  Right now, these robots are already undergoing pilot programs at Taiwanese home improvement chain B&Q.

XYZ’s huge range of products, both inside and outside of 3D printing, are made possible in part because of the company’s leadership under Simon Shen and in part because of Kinpo’s 40-year history as a manufacturer.  To learn more about how Shen made both Kinpo and 3D printing history, pushing New Kinpo Group to develop branded products, and how XYZprinting was able to leverage this manufacturing history, stay tuned for an article on my visit to XYZ HQ in Taipei.