So we’re all used to printing our objects from a build plate upwards, but what about printing from 5 different axes? This method of Additive Manufacturing is proving to have some pretty useful strengths, including strength in the literal sense.

William Yerazunis, Ph.D., Senior Principal Research Scientist of Mitsubishi Electric Research Labs (MERL) has been experimenting with this technology to look at making 3D printed parts stronger. The aim for this project was to make printed parts strong in the areas where they need strength.

Conventional 3D printing creates objects in horizontal layers, and these layer create weak points. if there is a force pushing in the opposite direction of the direction these layers have been printed, such as up and through a part, it forces these layers apart. 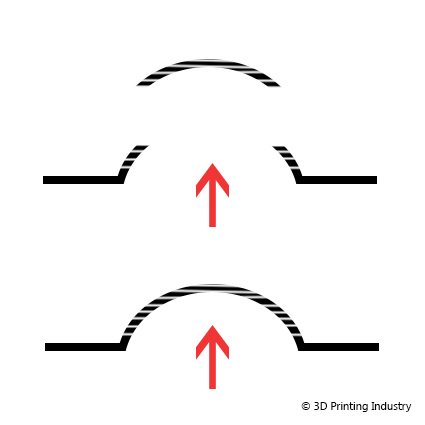 Printing at various directions, named 5D printing, is said to make printed parts three to five times stronger than conventional 3D printed parts. The print plate moves as well as the printer head as it prints, so the printing path follows the shape of the part rather than being printed in a straight layer.

To test this, Yerazunis printed two parts using the same CAD model, same plastic from the same spool, and on the same machine. The only difference between the two were that one was printed conventionally, whilst the other was printed using the 5 axis printing technique, which ended up using 25% plastic.

The two parts were then each put under an increasing amount of pressure from the underside, and the point at which they broke was recorded.

The conventionally 3D printed part broke at 0.1 mega pascals, whereas the 5D printed parts broke at 3.7 mega pascals. This is a very significant result, and could mean this alternate method of 3D printing could be incredibly useful in various applications where the strength of parts is an important feature. It could also mean that these applications could save material and therefore material costs whilst benefiting from a great increase in strength in comparison to conventional 3D printing techniques.

However, this method requires more thought and preparation before printing. This test was also only run on plastic parts, so it is yet to be said if this is the same for other print materials.

Yerazunis says, “5D printing does require a lot of analysis and it does require knowing how the part will be used. But when you can make a part that’s five times stronger, that really changes how you think about 3D printed parts.”