What does 3DHubs slowdown tell us about 3D Printing?

3DHubs is an online platform that connects owners of 3D Printers with anyone looking to get objects 3D Printed. The company started its operation in 2013, and since end 2013, it has published data on the number of 3D Printers available on its platform. To be listed on the platform makers need only to declare having a 3D Printer. 3DHubs does not verify the information, hence the total number of actual machines available is certainly much lower than the 29,500 declared at end April 2016. From my discussion with the company I expect  the number of actual 3D Printers available on 3D Hubs to be under 15,000.

3DHubs has published every month since end 2013 the number of printers declared to be available on its platform. The company has included a linear graph of this number of 3D Printers.

At end April 2015 the linear graph was as below: 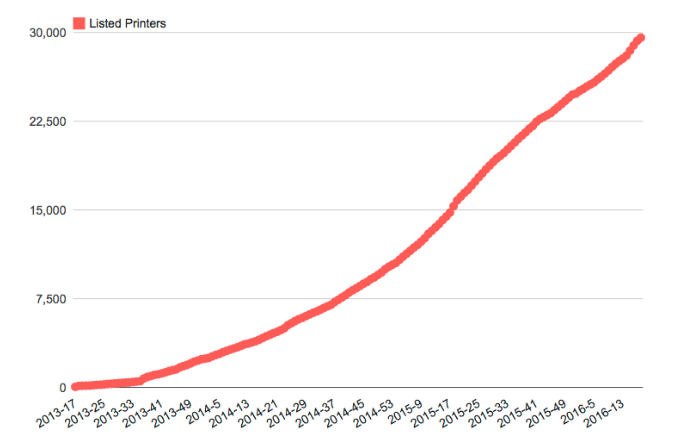 The company has relied on this graph to support its claim of exceptional growth since inception. It would have been more appropriate to replace the linear graph by a logarithmic graph. Replotting the data on a logarithmic scale graph provide the result below: 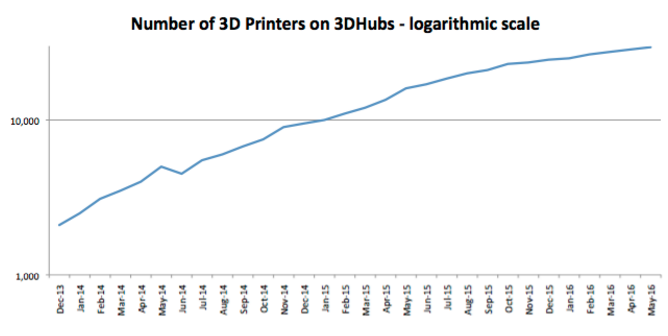 Actual number of 3D Printers available might in fact be decreasing

I would like to stress another point that support the clear slowdown in the number of 3D Printers available on the 3DHubs. By construction the company only adds the new printers that are declared by the makers and never subtract the printers that are no more in use by the makers. Obviously there are many reasons (maintenance, out of use, sale,…) why some machines should not anymore be available. Assuming a 2% monthly rate of 3D Printers leaving the platform (a very conservative 2% churn rate), the total of number of machines will be just under 23,000 instead of the 29,500 indicated by the company. With the adjustment, the growth of the number of machines declared available would have been nearly null since the beginning of 2016.

What does the significant slowdown tell us about 3D Printing?

As expected when the platform opened, 3D printers owner were very eager to list their machine(s) with the hope to turn it into a cash machine. And therefore the number of machines available grow very fast. This initial phase (the “exciting phase” – “the discovery phase” , the first 18 first months) has been been driven by makers who acquired their printer believing that it could easily print everything and anything. The following phase (since mid-2015) consist essentially of makers that acquire their machine for a special purpose. These new customers are generally professional. They are more reluctant to use their machine for some extra USD.

The desktop 3D Printing market is maturing. Customers are more educated on the capabilities of the machines. Customers have a clearer idea on how a 3D Printer can add value for their business. These customers don’t see much value to list their machine on a platform for some extra dollar. They prefer using it for their own project. This natural evolution will limit the growth of platform such as 3DHubs and will favor more targeted professional platforms, B to B platforms.