My friend Anna enjoys having a laugh dressing up for social occasions. During the daytime she can be found looking like a highly professional respectable citizen. Then, after the day’s work is done she turns into her alter-ego, which can be found wearing anything from attractive casual wear to parodies of some of societies most outlandish garb. One of her wilder accessories is her spiky rave-cap-type-thing. When I saw the intense new 3D printed LED Spike Hoodie by Stego Flex, I couldn’t help but think of her cool but crazy cap.

Anna is fine with 3DPI fame, she has already appeared in a UK national newspaper (not for her cap) and tells Members of Parliament off for not doing enough about ecological issues in her spare time. She’s also remarkably patient with me talking about 3D printing endlessly: Generally smiling and nodding… ensuring my Facebook mail about 3D printing at least looks to have been read… occasionally ensuring I’m parted from my computer to preserve my sanity… all the kindly things that good friends do for us 3D printing journalists.

Back to the LED spiked hoodie: The spikes are hollow and designed to be 3D printed in Ninjaflex filament. The STL files come in three different sizes, innovatively named large, medium and small. Each spike includes two sewable tabs for easily attaching to your hoodie or costume. It only takes about 10-15 minutes to 3D print each spike, which isn’t bad.

Adafruit has the designs for 3D printing and instructions for the circuit, all of which is fairly straight forward for an experienced maker. I would suggest that this is probably not first project stuff for newbies, but for those fresh into the world of making at home it is worth a look for range of applicable skills inherent to the making process. Crafting wearables using 3D printing, electronics and basic fashion skills has a lot of potential, and there is certainly a lot of lateral thinking going on around applications for the trinity of making areas. It looks like good fun. 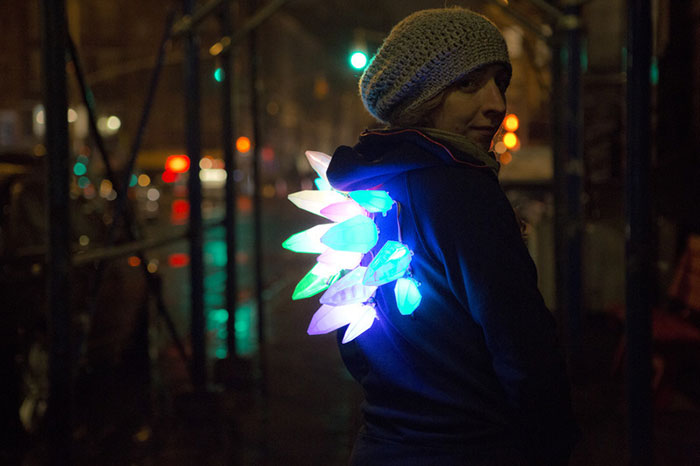 However, as interesting as wearable tech can be, and as fun as the 3D printable LED spikes are, I’m guessing that Anna will be far more likely to be seen making tongue-in-cheek party parodies in her cap than the wearables. Like the vast majority of people Anna has a lot to be getting on with and not much time for such projects, and in Anna’s case, things that actually make a difference. When I asked her about this she said:

‘You just asked if you could write about the cap.’

Er. Um. Er. Which is fair enough of course. Still, I’m sure someone will end up wearing the LED spikes. Sonic The Hedgehog / Mario Bowser gaming parties for the kids. Teenagers using hallucinogenic substances. Cats fighting armadillos. Viruses. That sort of thing.