How MakerBot, Thingiverse and OpenSCAD want to change every-Thing – Davide Sher talks to Bre in Milan

Here on 3DPI Bre Pettis, MakerBot’s CEO, does not really need an introduction because, for one thing we’ve interviewed him before and for another he’s probably the most famous 3D printing personality in the industry, and certainly has the most recognisable face. He is also one of the great advocates for this technology sector and represents one of the most dominant 3D printing brands. As one of the original founders of MakerBot, the leading consumer / desktop-based (or, as I like to call them, personal) 3D printers, which has, in turn, become the most important financial bet for Stratasys he is a busy man. The world’s second largest industrial 3D printer producer bet $400 million that Pettis is right, that MakerBot machines are going to change the face of personal manufacturing and the way the entire world “thinks about things.” We sure hope so, because we had a chance to meet him during Milan Design Week, where he came to see how 3D printing is changing the world of design. He came to visit us during our Synthesis exhibit and I had the chance to ask him about his plans in the near future for MakerBot and Thingiverse, which is rapidly shaping up to be a multi-million monthly user social network.

Davide Sher: How are the new MakerBot Replicators coming along?

Bre Pettis: We just launched our fifth generation Replicator for the prosumer area but this time we are focusing more on the consumer, with the Replicator Mini, and trying to target the higher end industrial side with the Z18. I think design professionals will appreciate the new Replicator, a machine they can just keep on their desk, while consumers will like the possibility of carrying around the Mini with relative ease. The Z18 offers serious capabilities at an accessible price point so I think the game is on.

Davide Sher: MakerBot just signed a new agreement for its first official distributor in Italy, Energy Group. What is going to change?

Bre Pettis: What it means is that now there will be someone local that will help both us and our customers. For an American company it is sometime difficult to do business overseas, as people order a product but are not fully aware of import duties that affect the final prices. Having an official distributor on the territory will streamline the entire process and give us support in terms of customer and technical assistance. 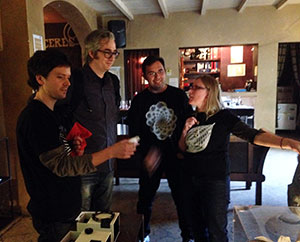 Davide Sher:  Is it correct to say that you now represent Stratasys’ consumer business?

Bre Pettis: Yes in a way it is correct and it is a little bit ironic: we started MakerBot in 2007 because we could not afford Stratasys’ 3D printers, and now we are part of the family.

Davide Sher:  Does MakerBot ever intend to explore other technologies along with FDM?

Bre Pettis: Technologies such as stereolithograpy (SL) and laser sintering make sense on the industrial side but our goal is to produce machines that consumers can use right in their living room, that can sit on their desks and do not release odours and chemicals. SL is an awesome technology and the XFab by DWS [DS: the new prosumer SL 3D printer we were presenting during the Synthesis event] is a hot machine but we want machines that are fully accessible, even to kids. There are going to be a lot of different 3D printers on the market and there is room for everyone. What I love to see is people and companies inventing new things, not just imitate and follow.

Davide Sher:  Let’s move on to Thingiverse. Is it really going to be the “Thingiverse of the world” and how do you intend to organize its growing amount of content?

Bre Pettis: There are definitely some issues we need to solve. We started Thingiverse as a place where people could share their digital designs of things. We knew people could download music, television, books… and we wanted people to download things. In the beginning we had a laser cutter: we mostly published laser cut designs and everyone who participated was incredibly creative. Now it is different: we have millions of viewers every month and tens of thousands of designs every month,  so there are a few things that happened.

For example, recently it was the first month that there were more things collected than created. So there were more people that organized things rather than users creating new things. People are contributing to organize the website’s database and that is a positive development.

One of the biggest challenges is – I must admit – that I am starting to fail at going through every single new upload. Up until a year ago I would look at every new thing on Thingiverse every day. It would take me about 20-40 minutes but now there are so many new things uploaded everyday that often I just do not have that extra hour I would need to look at everything.

So we have implemented certain algorithms that allow the cooler objects to show up more but it is a bit like Twitter. In the beginning you could “hear” everyone on it. Now it is just too huge.

Davide Sher:  Are you going to further develop the social aspect of it?

Bre Pettis: We have to. Otherwise you will just not be able to see what is cool. We have to help each other find the best objects to print or it will be like drinking straight from the hose… too much guzzling. Our biggest challenge is to make it so that everyone can find the things that interest him or her. We want to implement features that will allow users to follow specific designers and have their creations show up automatically in their feed. Also we want to add features for following and contributing to discussions. These are awesome challenges and we love to work on them.

Davide Sher:  How many people work on Thingiverse exactly?

Bre Pettis: Developers can do amazing things but finding good web developers is not easy. Right now the team is in the order of a few tens of people. Everyne works on everything: the team collaborates on the design, on the apps. Everyone involved is a Thingiverse power user so when we launch something we try to make it the best it can possibly be.

I would love to be able to grow the development team into the hundreds, but Thingiverse is tricky because we do not make any money on it, we just spend on it and what we get in return is a lot of excitement because there are literally tons of objects being downloaded all the time. For us it is a “labour of love”.

Davide Sher: That brings us to the “big” question. Is there an ethic to what can be uploaded or do you just try to give as much freedom as possible?

Bre Pettis: We want Thingiverse to survive so from day one we were DMA compliant. Basically we work like YouTube: if somebody complains we take it down. There is a very specific way in which they have to formulate their request and we only take it down if the precise legal format is followed. At this point the original person who uploaded it can do the same to claim ownership of the design and ask for it to be reposted. So we have to put it back online and after that any further request has to be handled by a court. It is a very standard procedure.

Davide Sher: What do you think of OpenSCAD as a 3D modelling software?

Bre Pettis: The “father” of OpenSCAD is Marius Kintel, a Scandinavian who lived in Austria and is now in Toronto. He is one of the smartest people in the world and a wonderful person. When he took over the OpenSCAD project he rewrote every single line to optimize it and we customized Thingiverse on top of it. In fact we are great friends: he worked with me on building my first 3D printer. Now as MakerBot we are supporting OpenSCAD development: for programmers and web developers it is the ultimate 3D modelling tool – open solid CAD modelling – and adding customizers on top of it it makes it so that you can program a Christmas tree and give amateur end users the tools to change it and personalize it through sliders. The relationship between us and OpenSCAD is a friendship that is going to last a long time.

Davide Sher: Thanks so much for talking with us Bre, we appreciate your time.