Not on the Poop Deck: US Navy to Give 3D Printing Its Sea Legs

The Navy looks to add 3D printing to its aircraft carriers. These behemoths of the sea currently carry functional military cities in the bowels and on deck of the ships, so in a move to modernity and capability, 3D printing has become a must-have. While excited by the possibilities offered by what would surely be 3D printing at the highest standard and innovation, performance aboard a vessel on the high seas remains a hypothetical challenge. However, like any challenge brought to the US Military, the issue will be addressed with tactical calculations.

As additive manufacturing continues to astound users with printing potential, risks and rewards receive new measures as the Navy works to assure safe and highly functional application of 3D printing aboard their ships. “There are significant safety concerns,” Lt. Ben Kohlman of the Chief of Naval Operations’ Rapid Innovation Cell said on Tuesday during a presentation at Sea Air Space 2014. “The powder that’s used in the aluminium or titanium is highly flammable.”

Apart from conflagration, space, a prized commodity aboard Navy vessels, must be designated for a 3D printing station conducive to function and spatial relations. “Right now, 3D printing is done at shops on land – not a ‘dynamic environment’ like a ship at sea,” Coast Guard Commander Tyson Weinert said. “They can’t be subjected to the pitch, the roll, the yaw [of a ship], so now you’ve got those forces acting on a printer. What is the tolerance for that, how will the printer itself react to those other forces? You can try to manage the center of gravity as best you can, try and get the safest spot with the minimal amount of movement, but what is the trade off? What is on the ship already … versus where will the printers have to go? So that is a whole design process in itself.” 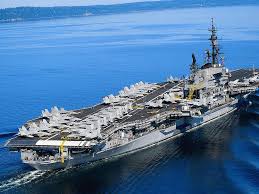 It is possible to imagine pupils dilating and heartbeats quickening in Annapolis as talk of 3D printing bone cartilage and soft organ tissue is tossed around with news that even high school students can print and compose flying drones. The Navy is sure to find a way to secure 3D printing aboard their ships able to find a space. As with many innovations, we might soon benefit from the advances in software and manufacturing accompanying military-grade use of innovation and technology. It might pass through a few steps and a couple years, but the fallout will trickle into civilian life. Interestingly, what has enticed and quickened the Navy’s adoption of 3D printing at sea is the proliferation of 3D printing, so this may be a case when, at first at least, the technology trickles to the Navy and it will form to their needs as it has in so many other sectors.