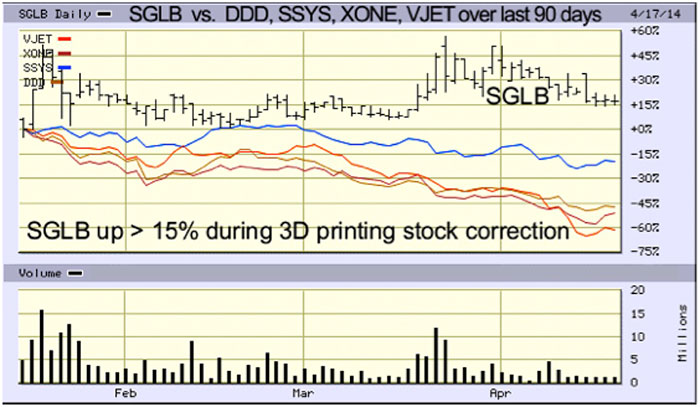 I believe the positive trend for shares in Sigma Labs will intensify over the next 3-6 months for reasons I’ll explain in this article.

The rapidly-evolving technologies utilized in additive manufacturing are now moving the industry towards true manufacturing capabilities in what many are calling “The Next Industrial Revolution.”

However, 3D printing of high value, complex metal components used in the aerospace, automotive, medical and defense industries requires assurance that quality parts are being produced. This critical need is directly addressed by PrintRite3D®, Sigma Labs’ proprietary and patented hardware/software solution that quickly assesses the quality of a part during 3D printing by using real-time data as opposed to waiting for costly post-process inspection (see PDF presentation).

Part inspection and qualification is a key focus for America Makes, (the National Additive Manufacturing Innovation Institute), with Sigma Labs now playing an intregral role.  In January, Sigma Labs was chosen by America Makes as part of a team established  “For the development of a commercially available, platform-independent Quality Assurance technology for high-volume AM production of aerospace components, which technology is currently lacking within the industry.”

The America Makes project will generate up to $750,000 in revenue for Sigma Labs, and CEO of Sigma Labs, Mark Cola, stated in a press release:

“We are quite pleased to have been chosen along with our partners by the premier AM and 3DP association to participate in accelerating commercialization of our quality assurance technology.”

“To participate in accelerating commercialization of our quality assurance technology” is an interesting word choice that I’m sure readers of this article can infer the significance of on their own.

In their recent 10-K filing Sigma Labs provides an interesting discussion of their market opportunity for PrintRite3D®.

Sigma Labs appears positioned to provide the AM market a product offering for real-time quality assurance and control based on our core competency in real-time monitoring and control called PrintRite3D®. Our IPQA®-enabled PrintRite3D® technology appears ideally suited to meet the needs of AM at this critical juncture in its development. Our technology will allow AM to be used during manufacturing of safety-critical or performance-critical metal parts, such as used in aerospace and defense. Currently, these applications are difficult because the part quality cannot be completely guaranteed, and using inspection after manufacturing is difficult, costly and does not find all defects of concern. Therefore, we believe that PrintRite3D® will be a vital enabler for AM to realize its full potential. Sigma has unique offerings in this field. Furthermore, as a greater number of these AM applications could be cloud-based, the PrintRite3D® technology is fully compatible with highly networked, cloud-based implementation – subject to the data and intellectual property restrictions which may be imposed by some companies for competitive reasons.

We believe that Sigma Labs’ unique process know how and trade secrets of IPQA® for AM, and a U.S. patent award for monitoring and control for processes specifically including AM, along with its PrintRite3D® technology has uniquely positioned Sigma to be a leader in the market space for quality assurance technologies for AM. Our proven and sophisticated analysis software has been demonstrated and tested at many manufacturing sites around the world which has validated the PrintRite3D® INSPECT and SENSOR PAK modules. In addition, Sigma has strategic relationships with experienced aerospace companies in North America that are assisting in the validation of our PrintRite3D® suite of modules.

Initial sales of PrintRite3D®systems have begun, with more expected “over the near term” according to CEO Mark Cola, stating:

“This important delivery is the result of our determined commercialization efforts as we transition to production during 2014. We expect additional PrintRite3D® business from this customer as well as with a variety of major aerospace companies over the near term.”

While the customer has not been named, I suspect these first two systems were delivered to GE Aviation. Greg Morris, GE Aviation’s business development leader for additive manufacturing stated in an earlier press release that:

In their 2013 10-K filing, Sigma Labs’ balance sheet shows strong improvement with $1.3 million in current assets and only $141,000 in current liabilities for a current ratio of 9.4. This is the strongest current ratio in any 3D printing stock and Sigma Labs has no long term debt.

More significantly, Sigma Labs recently completed a private placement bringing in an additional $3.3 million in cash to the company,  paving the road for full scale commercialization of PrintRite3D® to begin. CEO Mark Cola commented that the placement:

“Has now set the stage for Sigma Labs to enter a period of accelerated growth. This funding enables us to add key scientific and engineering personnel, and provides the ability to service our customers on a large scale and execute our overall plans for increased expansion in 2014 and beyond.”

Shares of Sigma Labs have had a strong propensity to bounce off the 200 day moving average, as the chart below confirms. 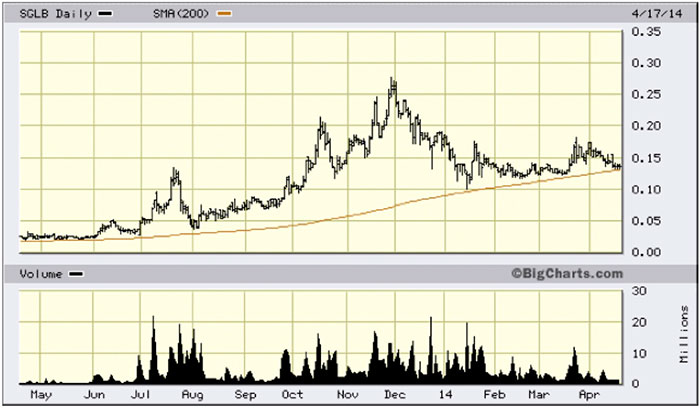 With additional sales of PrintRite3D® pending “over the near term”, a strong balance sheet and full scale commercialization on tap, I believe this key support level may prove to be an excellent point of entry for new investors, as well as an opportunity to add to positions as I have recently.

It’s been a turbulent ride so far this year in 3D printing stocks, but shares of Sigma Labs have been outperforming the much larger, well-known companies in the last few weeks. I believe investors in the company see positive recent developments in Sigma Labs combined with their first mover advantage in addressing a critical industry need. I believe Sigma Labs’ partnerships and recent announcements with companies like GE, Honeywell, Metronic Systems and their work with America Makes “for the development of a commercially available, platform-independent Quality Assurance technology for high-volume AM production of aerospace components” are reasons why this little company has been outperforming. Moreover, I believe this trend will continue and is likely to accelerate as full scale commercialization of PrintRite3D® begins.

Update: Since the writing of this post and its first publication on 3dprintingstocks.com, SigmaLabs has announced that it has signed a Technology Cooperation Agreement with Materialise NV of Leuven Belgium.  The agreement sets forth the parties’ intent to collaborate technically and commercially in the integration, production and marketing of PrintRite3D® software-related products for metal-based additive manufacturing.

Disclosure:  I own shares of Sigma Labs (SGLB). I have not been paid by Sigma Labs Inc. or any third-party for this article.