Museums are a dazzling insight into the way we used to live, but the artifacts are often held behind glass or a velvet rope. It makes sense, these are often priceless relics and they can’t be simply passed around like toys.

But what if you are blind? That means you are simply denied the chance to appreciate some of the most spectacular works of all time. 3D printing has the answer.

How it all began

One of the founding principles of the Virtual Curation Library is to open up the past to a broader audience. It all started when the Virginia Commonwealth University received a Department of Defense grant and started making a digital archive for the military with the help of a 3D scanner.

It has swiftly grown into one of the most ambitious curation projects of all time as universities from around the world join forces to 3D scan artifacts ranging from animal bones through to engineering breakthroughs. 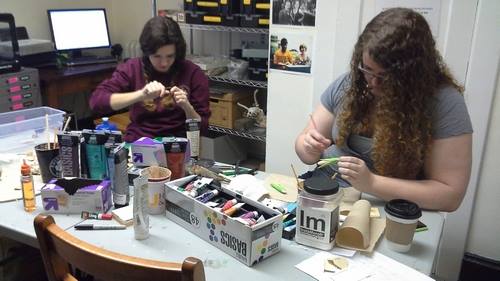 The scientists soon realised we could get so much more from this digital archive if we brought 3D printing into the equation and made physical representations of fine art, ancient relics and even scale models of important discoveries. Even models of dinosaurs and buildings can be printed to help bring history to life. It’s obviously a fantastic educational tool.

Then another poignant reason came to light.

A new vision for the project

Shortly after starting the project, Bernard Means received an email from Robert Jaquiss, who has been blind since birth.

He had a powerful assessment of the modern museum experience for blind people.

“It has been my experience that many people who are blind avoid museums,” he said. “Glass cases, barriers and a lack of signage make visiting museums a boring experience. People who are blind cannot easily get to sites that are not accessible by public transport. They must instead rely on family, friends or possibly a tour operator in order to visit a site. The practice of Virtual Curation makes it possible to share 3D images of artifacts.

“An artifact may be viewed by anyone with the appropriate computer hardware and software. From the point of view of this author, Virtual Curation has a major benefit. 3D images can be printed with a 3D printer producing a touchable 3D model. Such models can be touched by the blind allowing those who are blind to more fully appreciate the subject matter.”

It was something the team just had not really considered and so it worked with Mr Jaquiss, sending him digital models that had been created from the scanned artifacts. He ‘tested’ a variety of models that covered significant times and places in history, including George Washington’s childhood and his time on the Mount Vernon Estate.

Mr Jaquiss lives on the West Coast, but a simple login allowed him to get the CAD files and create the artifacts at home.

This was a breakthrough as Mr Jaquiss could, for the first time, feel a piece of history in his hands. He could also combine this tactile experience with spoken word educational material downloaded on his computer to give him the richest possible history lesson.

Of course it goes beyond helping the blind. Every museum has wheelchair access, but that does not mean it’s a simple matter for a disabled person to get there. Children in poorer countries simply won’t be able to make the journey to major cities to visit museums either and a 3D printer could give them access to educational tools they don’t have right now.

The Virtual Creation Library will probably never be finished and it could well become one of the biggest projects of all time. We’re looking at scanning the whole world, since the dawn of time. It is a frightening task.

But every step towards that goal is a chance for a blind person like Mr Jaquiss to feel a moment of history in their hands, or for children in Africa to understand how America was born. That’s all the motivation the team needs to keep going, so that they can put a piece of history into someone’s hands for the very first time.