GE’s new LEAP and GE9x jet engines are among the most ambitious programs in the company’s history. New 3D printed fuel nozzles and a new composite turbine will give the engines stronger thrust, reduce fuel consumption and ensure higher durability. This is made possible by the use of laser melting 3D printing technology for mass production.

For all its activities, ranging from energy production to advanced manufacturing, GE has never made a secret of its deep interest for the possibilities opened by 3D printing, setting up AM plants all over the world and contests to explore its possibilities. Now this expertise is beginning to bear fruits as GE is setting up the very first plant capable of mass producing components by direct metal laser melting. 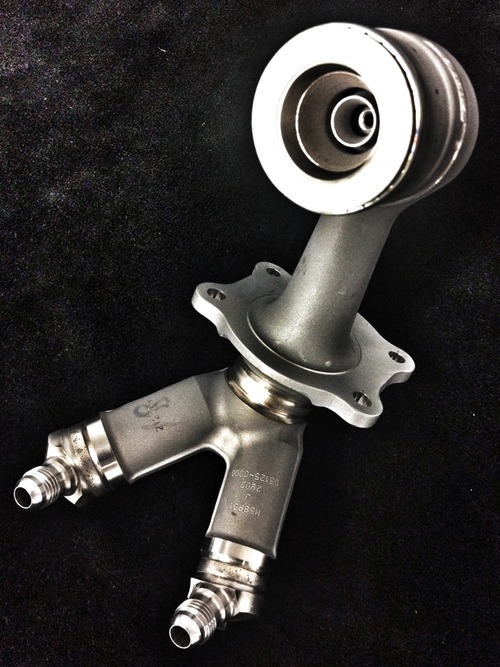 When it will open in 2015, the $50 million factory, based in Auburn, Alabama, will be set up with several metal-based additive manufacturing systems. They will be operating simultaneously and will be 3D printing jet engine fuel nozzles for the LEAP jet engine, developed by CFM International (a 50-50 joint venture between GE and France’s Snecma), which has already set a record as GE’s best selling aviation engine ever, with over 6.700 orders from 20 countries for a total of $96 billion in forecasted sales.

GE invested over $1 billion in R&D on research of the 3D printed nozzles. Each engine will have 20 of them, along with fan blades made from fourth-generation carbon fiber composite and a hot section that includes parts made up of highly advanced ceramic matrix composites (CMC). 3D printing allowed the engineers to make the nozzles as a single piece, thus highly reducing the time necessary to assemble them from separate components, while also cutting costs, reducing material use and making them five times more durable than traditional nozzles.

Through another venture in partnership with Japan’s IHI Corporation, Safran subsidiaries Necma and Techspace Aerospace, and Germany’s MTU Aero Engines, the company is also developing the new GE9x, the world’s largest jet engine, destined for the new long haul Boeing 777 liners, with 3D printed components. Compared to the the current generation GE90-115B on existing Boeing 777-300ER liners, the new engine is expected to deliver 100.000 pounds of thrust while reducing fuel consumption by 10%.

To achieve this result, GE’s technicians made extensive use of 3D printing in the prototyping phase as well, ensuring any simulation of the new composite fan blades that would yield fuel consumption savings below 10% could be rapidly modified and the process repeated. The use of new materials and 3D printing technologies also allowed GE to drastically reduce the weight of the engine.

This video show exactly what GE’s has in mind for 3D printing: